From Singapore to Seattle, the traditionally internet-shy ministry has moved 35,000 BSF participants to videoconferencing amid the coronavirus pandemic.
Maria Baer|March 13, 2020 09:00 AM 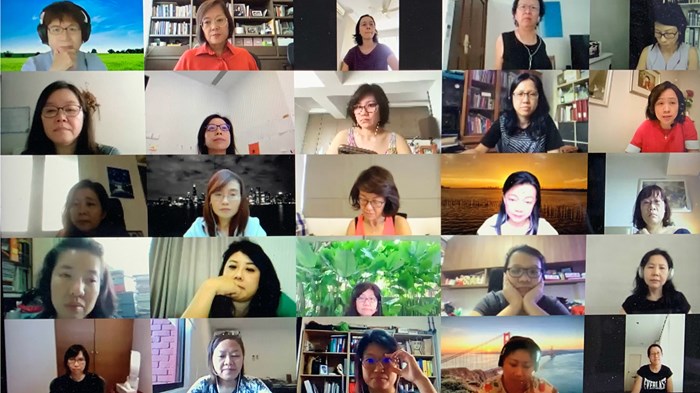 Image: Courtesy of BSF
A BSF class in Singapore, now meeting by video due to the COVID-19 outbreak.

Maureen Law was supposed to fly from her part-time home in Singapore back to the Bible Study Fellowship (BSF) headquarters in San Antonio last Monday. But now, BSF’s regional director for Asia has postponed her trip for at least another month. The COVID-19 outbreak has thrown her plans—and those of millions of others, including her employer—into flux.

As the overseer of BSF’s classes and group leaders across Asia, Law was part of the team that decided in recent weeks to hold meetings exclusively online in Singapore, Japan, Taiwan, South Korea, Malaysia, and other parts of Asia. This means 35,000 participants—1 in 4 of whom are over 60 years old—are now tuning in to their Scripture discussions and lectures via Zoom, a web conferencing platform that allows users to join together remotely with audio, video, or both.

The move to meet online is a major—and quick—shift for a ministry that has traditionally eschewed the internet.

BSF hosts thousands of groups in 70 countries for free Bible studies every week, mostly in churches. The classes typically include a time of corporate worship, small group discussions about the weekly Bible reading, and a lecture by the group’s leader.

The venerable ministry, which celebrated its 60th anniversary last year, is known for privacy and even a sense of rigidity; for example, it used to have a stringent dress code for teachers, and leaders have been known to discourage attendance if participants haven’t done their homework. BSF only began to post its study materials online a few years ago, when some group leaders made lectures and study notes available to participants through the members’ website, mybsf.org. BSF launched its Facebook page just two years ago and joined Instagram in 2016.

It’s likely that BSF’s further transition to online meetings will follow the geography of the coronavirus’s spread. A number of classes in Seattle went online this week in the wake of a rise in local cases.

Hollie Roberts, BSF’s chief development officer, said the ministry is taking its cues from local governments, schools, and churches, as well as tracking the spread of confirmed cases, to decide next steps. Classes in Basil and Zurich, Switzerland, and in Paris have already moved to online-only gatherings. BSF transitioned some classes in Toronto to Zoom this week after the church in which it was meeting canceled all public events.

BSF wasn’t totally unprepared. In recent years, as the ministry has worked to modernize its offerings for millennials, it has launched more than 1,000 satellite groups, allowing participants from remote areas—such as prisons—to view classes online. And for the past two years, BSF has been piloting an online program that has drawn about 10,000 people who gather in groups of 12 to 15 across the globe.

Roberts said the pilot program has been helpful as BSF responds to coronavirus concerns, even though the logistics aren’t exactly the same: Instead of a dozen people connecting, some Asian classes with 500 to 600 people are now conferencing via Zoom.

Law said the transition wasn’t without hiccups but has been generally well received.

“The initial hesitancy has turned into delight by many of our members, who appreciate that they have this opportunity,” she said. Some older participants expressed anxiety at first, but Law said her leaders have stepped in to help them set up the technology.

That could be for several reasons, she suggested. Students have been particularly excited about BSF’s current study in the book of Acts. But it could also be because of the convenience of a class at a computer, or the fact that most life activities outside the home have also shut down. Or, Law said, it could be that anxiety about the spread of COVID-19 is driving people to the Word of God.

According to Jonathan Petersen, content manager at Bible Gateway, online searches for terms like fear, disease, and end times dramatically spiked this week and have increased fivefold or more since reports of the outbreak first made news in December.

On the popular YouVersion Bible app, searches related to fear—such as fear not, do not fear, spirit of fear, and perfect love casts out fear—increased this week by 30 percent to 75 percent over last week. The two passages with the most spikes in interest were 2 Timothy 1:7 (NIV: “For the Spirit God gave us does not make us timid, but gives us power, love, and self-discipline”) and , particularly verse 10 [NIV]: “… no harm will overtake you, no disaster will come near your tent.”

Roberts said for those seeking encouragement, BSF’s current study in the Book of Acts is the perfect place to land.

“I think about the end of Acts and the shipwreck,” she said. “God promises Paul, ‘You’re all going to live,’ but the ship still runs aground into the sandbar, and they still have to get out and swim or grab ahold of driftwood and float.” Despite the obstacles and unforeseen circumstances, she said, the gospel still spreads like wildfire.

“I believe this transition to BSF in the online arena is demonstrating that to be true,” said Roberts. “You can’t stop the gospel.”

More groups will likely have to stop meeting in person. Based on her experience in Singapore, Law’s recommendation to her North American colleagues is to prepare the study group leaders ahead of time. “We prepared our leaders by saying, ‘Okay, let’s simulate a leaders’ meeting online,’” she said. “Train them how to connect online [and] how to be engaging and interactive.”

Back in San Antonio, Roberts said BSF’s executive team is watching Asia closely to learn all they can before the likely scenario arrives that more US classes will move online. One thing they’ve learned, she said, is that when classes are online, there’s less of a need to hold leaders meetings and large group study meetings on different days. In the online environment, they’re now hosting those back to back.

In the US, BSF’s classes follow a typical school calendar, which means they’ll have “spring break” soon and are scheduled to finish in May. Roberts said nearness to that finish line is one reason the ministry hasn’t simply suspended all classes already. But even in areas outside Seattle, leaders are taking precautions.

“We’ve emailed everybody, every class member in BSF,” Roberts said, “and pointed them to the World Health Organization and CDC [Centers for Disease Control and Prevention] for best practices.” BSF leaders are recommending class members practice social distancing where logical. Roberts cites one teacher who has voluntarily quarantined herself for the next two weeks after her daughter returned home from Japan.

Roberts said it’s possible the move to online classes could lead to some permanent changes at BSF. “We recognize that in certain stages of life, it’s easier probably to attend an online discussion group,” she said. “So that’s always been the plan. People know that’s coming.”

Still, Law said she has heard from some Asian participants that they miss the in-person intimacy—especially at such an isolating time. (For example, in some areas of China, only one person—and it has to be the same person—is allowed out of the house once a week to get “essentials.”)

And as entire families are forced into close quarters for the foreseeable future, others are struggling to find quiet time and space to dial in. “Some of our leaders can’t even Zoom in with the video and the audio on, because they have kids at home,” Law said. “But they still Zoom in and are listening.”

At its core, BSF isn’t a social club; it’s a place to study the Bible. Roberts said the ministry doesn’t focus its study plans on the topics of the day but instead on systematically reading through the Word of God. However, almost every year, she said, groups find their chosen study to be providentially relevant. This year has been no exception: The theme for the Acts study is “Unstoppable.”