Faced with COVID-19 quarantines and new rules for social distancing, some pastors are serious about reviving the 1950s fad.
Daniel Silliman|March 21, 2020 09:00 AM 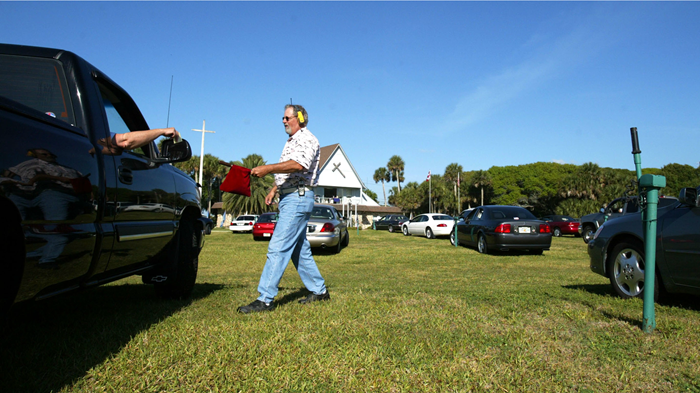 Drive-in church seemed like a joke. And then, in a moment, it didn’t anymore.

The idea was a novelty in the 1950s, promoted as the church of the future. But it’s time didn’t come, and never came, and then it was gone, and the whole thing seemed silly. There were still a few drive-in churches around, of course, but they were curiosities, fading roadside attractions, dingy and decaying outside of town, monuments to bygone Americana.

Nik Baumgart, the pastor of an Assemblies of God congregation in a suburb of Seattle, certainly never dreamed of having a drive-in church. He had thought of a lot of ways to reach people, grow his church, and meet the spiritual needs of his congregation, and honestly the idea of a drive-in church never came up.

But then the staff of The Grove Church in Marysville, Washington was having a meeting to try and figure out what to do in response to the COVID-19 pandemic. Normally, the church would have about 1,200 people gather in the sanctuary on a Sunday, but health officials were discouraging any groups over 50. There was talk of “social distancing,” requiring healthy but possibly infectious people to stay at least six feet away from each other, reducing human contact to limit the spread of the coronavirus.

But how do you have church with people more than six feet away from each other? A lot of groups were moving everything online. Was that what they should do?

Jon Rich, the administrative pastor, thought of something funny. “Maybe we should look into drive-in church,” he said, and the staff all laughed.

There was a beat. Then Baumgart said the sentence again: “Maybe we should look into drive-in church,” he said. It wasn’t funny this time. It was an idea that seemed like maybe it was perfect. Maybe it’s time had come.

Within a few a minutes, Baumgart told Christianity Today, the staff had embraced the concept they had never taken seriously before and moved to the technical challenge: how do you actually do a drive-in church? How does that work? What equipment do you need?

Pastor Bob Kemp-Baird spent his week fielding questions like that at the Daytona Beach Drive-in Christian Church in Daytona Beach, Florida. The Disciples of Christ church has been in operation for 66 years and Kemp-Baird has been pastor for eight. He confesses he’s still not an expert at low-frequency FM radio broadcasting, but he says it's actually pretty simple.

“It’s not all that difficult to do,” he told CT. “It’s not like there’s a lot of equipment that you need beyond what churches have anyway to amplify the message.”

A low-frequency trasmitter sends out a signal that can be received for half-a-mile to a mile. It costs a few hundred dollars and can be plugged directly into the church’s existing sound board. People can tune in on their radios. Most states do not require licenses for that limited broadcast.

The bigger challenge of a drive-in church, according to Kemp-Baird, is that it can feel like you’re preaching to a parking lot.

See Beyond the Cars

“I’ve come to adapt my preaching and my mindset as well, to know that there are people behind those windshields,” he said. “I’m not speaking to cars. I’m speaking to people.”

Kemp-Baird talks a lot about the people in the cars. Who they are. Why they come. Why a drive-in church meets their specific needs in ways other churches can’t. It used to be that when people asked Kemp-Baird about drive-in church, they asked him how it could possibly be a good thing to have a church where people were so isolated from each other, each in their separate cars.

This week, though, as Kemp-Baird supervised the volunteers preparing communion for Sunday—making sure they all washed their hands and wore gloves as they filled the single-serving cups and individually wrapped the wafers to hand to drivers as they pulled into the church for worship—the phone kept ringing, and pastors kept calling with questions, but no one asked him to justify the idea of drive-in church. They just wanted to know how to do it.

“Churches are trying to find any way they can to gather people together,” Kemp-Baird said. “They’re really feeling from their congregants, ‘we want to come together to worship, but we recognize the health risks. So what do we do?”

Originally, according to Kemp-Baird, the Daytona Beach Drive-In Christian Church served vacationers. People would drive to Florida to spend their vacation at the beach and they would want to go to church on Sunday, but not dress up. They could stay in their cars in their shorts and swimsuits, hear a good message, and then go right to the beach.

That was similar to the idea behind America’s most famous drive-in church, started by Robert Schuller in 1955, according to sociologist Gerardo Marti, who has a forthcoming book on Schuller and megachurch ministry, co-authored with sociologist Mark Mulder.

The slogan for Schuller’s drive-in church in Southern California was “Come as you are in the family car.”

“Churches are incredibly inventive,” Marti told CT. “Schuller contrived a way for strangers to come to church and come to church without having to know people and be concerned about how you present your self. People felt like they could just come. And that was emphasized. You don’t have to worry about anything else but can I get there?”

Schuller, a minister in the Reformed Church of America (RCA), had great success with his church and promoted the idea far and wide. Some thought the novelty of church-in-cars could only work in Los Angeles, but Schuller disagreed.

“This was the revolutionary thing that was going to reinvent the denomination,” Marti said. “He felt the entire culture was moving to automobiles, with the federal investment in highways, and the new drive-in restaurants you had being developed by Ray Kroc and others. You had all this convenience around automobiles, so building around automobiles was a compelling vision.”

By 1971, there were at least a dozen RCA drive-in churches around the country. But then there was an oil crisis in ’73 and gas prices shot up, making it more expensive to spend time in your car. Cars became smaller, in subsequent years, and less comfortable, and everyone agreed that people didn’t want to sit in their cars for church. The drive-ins faded, another fad of the ’50s passed.

Except in some places, it continued. And the drive-in churches that kept going found they were meeting a need they hadn’t planned on meeting.

“We provide community for people who have a hard time accessing it in other ways,” said Traci Parker, pastor of the Woodland Drive-In Church, an RCA ministry in Grand Rapids, Michigan, that started more than 50 years ago. “A lot of people who come to the drive-in come here because it means they have that option to stay a bit more separate from other people.”

Parker said she knows drive-in churches have seemed like a punchline. But spend a little time at a drive-in church, Parker says, and you’ll see a beautiful community of people who don’t feel like they fit anywhere else.

Parker’s email inbox has been flooded with pastors asking her about drive-in church in the last week. She hopes they try. And hopes it actually has a long-term impact.

“Anytime the churches can see people they didn’t see before, who they weren’t looking for,” she said, “that’s a good thing.”

That was the idea that convinced Scott Thompson to start a drive-in ministry at University Parkway Baptist Church, in Johnson City, Tennessee. He was on vacation with his family in Florida, about five years ago, when he saw the Daytona Beach Drive-In Christian Church. On the drive back to Tennessee, he and his father-in-law, another Southern Baptist minister, made a list of all the people who might not go inside a building for church who could go to a drive-in service.

They thought of people undergoing chemotherapy treatment, people with anxiety issues, people who struggle to walk in from the parking lot, soldiers with post traumatic stress, moms with new baby’s they don’t want everybody touching, and grieving people who aren’t ready to brave all the well-intentioned questions.

“The list is very long,” Thompson said. “When we got home from that vacation, my father-in-law said, ‘Well your church is crazy enough to try it. You should try it.’”

Thompson brought it to the church staff meeting, thinking they would laugh and that would be it. But it didn’t seem like a joke, and pretty quickly the church was talking about the technical aspects of how to do it.

“The biggest challenge was the transmitter, figuring it out,” Thompson said. “But it’s just one input. You plug it into the sound board.”

Thompson is excited about the possibility that the public health crisis, brought on by coronavirus, could bring about the revival of drive-in churches. For years he’s been telling everyone who would listen that they should try this. But no one would listen. Now he’s gotten so many phone calls he can’t return them all before Sunday, and he’s trying to direct people to his explainer video on Facebook.

According to Thompson every church could have a drive-in service set up by Easter. If they’re thinking about it now, he said, they’re just in time.