The goal of Boko Haram and ISWAP is “to divide Christian brother against Muslim brother,” Buhari administration tells CT.
Jayson Casper|March 2, 2020 11:11 AM 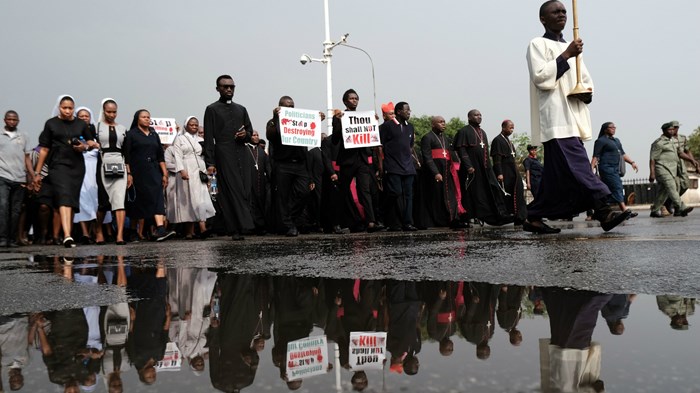 The Nigerian government now agrees with what church leaders have been complaining for years: Christians are the target of jihadist terrorism.

“In the wake of a renewed onslaught by our tireless military against Boko Haram and their ISWAP (Islamic State West Africa Province) allies in recent times, the insurgents have apparently changed their strategy,” said Lai Mohammed, the minister of information and culture, at a press conference last week.

“They have started targeting Christians and Christian villages for a specific reason, which is to trigger a religious war and throw the nation into chaos.”

In comments given exclusively to CT, the administration of President Muhammad Buhari clarified that this targeting is not new.

“Yes, Boko Haram is targeting individual Christians. In doing so, their target is all Nigerians, and their goal is to divide Christian brother against Muslim brother,” Mohammed, the information minister, told CT.

“What Boko Haram seeks—and always has sought—is to drive a wedge between Christians and Muslims in Nigeria.

“By targeting Christians, they seek to promulgate the falsehood that the democratically elected Nigerian government does not care to protect them.

“By targeting Muslims, they seek to promulgate the falsehood that the terrorists themselves follow truthfully Islamic teachings, and those they target do not.

“It is the strategy of the desperate.”

CT previously reported on the martyrdom of 11 Nigerian Christians killed by ISWAP around Christmas, as well as the January 21 killing of Lawan Andimi, a Brethren pastor and regional leader of the Christian Association of Nigeria (CAN), beheaded by Boko Haram.

In response, CAN declared that January 21 be commemorated as an annual national day of prayers for the persecuted Christians of Nigeria.

On February 19, 2018, Boko Haram kidnapped 110 Dapchi schoolgirls. Only Leah Sharibu remains in captivity, for refusing to renounce her Christian faith, after the government secured release of the rest.

And on March 1, 2018, ISWAP kidnapped Alice Ngaddeh, a UNICEF nurse and mother of two, along with other aid workers. Others captured were killed or released, but Ngaddeh remains a “slave.”

“This government continues and seeks to secure the release of all children and captives of terrorists—and we do so regardless of their creed or the name of their creator,” said Buhari in a presidential statement released on the anniversary of Sharibu’s capture.

“And as we redouble our efforts for Leah’s return, we can never allow the terrorists to divide us—Christian against Muslim, Muslim against Christian. We are all sons of Abraham. And all Nigerians have the same worth and rights before the law, and before God.”

In an exclusive op-ed for CT in which he praised the faith of Andimi, Buhari said 90 percent of Boko Haram’s victims are Muslims. CAN “angrily” rejected this statement, and called on the president to reveal his sources.

In an article at the National Catholic Register decrying a “Christian genocide,” former Congressman Frank Wolf, author of the United States’ International Religious Freedom Act, and Toufic Baaklini, president of In Defense of Christians, compiled the following statistics:

“The government statement represents tremendous progress, because Nigeria needs to walk in the truth in such trying times,” said Gideon Para-Mallam, the former Jos-based Africa ambassador for the International Fellowship of Evangelical Students, now an advocate for peace and social justice.

“To own up and say that indeed Boko Haram has changed tactics will make a difference. They [the Buhari administration] need to be commended for calling out targeted attacks on Christians, and now we can join hands as a nation.”

The earlier government narrative, he said, believed by many Muslims, is that Christians are not persecuted in Nigeria.

Though the Nigerian Supreme Council for Islamic Affairs (NSCIA) has called for a state of emergency against insecurity, following the information minister’s statement, it stood by its previous statement that it was wicked “to suggest that Boko Haram is a ploy to eliminate Christians,” as reported by Nigerian newspaper Punch.

Para-Mallam spoke to CT from London at a British Foreign Office conference to promote social cohesion in Nigeria. He said that Muslims there felt blamed when Nigeria was painted as a land of Christian persecution.

He said his offer to be given the names of all Muslims in captivity, that he might also advocate for them, was appreciated.

But this does not mean he disagrees with the pressure CAN has kept on the Nigerian government. Last month, CT reported on a nationwide march joined by prominent pastors across the country.

“The troubles CAN has made have added up, and brought the government to a proper understanding of the reality before us as a church and nation,” said Para-Mallam.

It has also brought international attention to Nigeria.

Johnnie Moore, a commissioner with the US Commission on International Religious Freedom (USCIRF), called for more efforts.

“The terrorists’ aim is to ethnically cleanse northern Nigeria of its Christians and to kill every Muslim who stands in their way,” he said, following a week-long personal visit with Rabbi Abraham Cooper, associate dean of the Simon Wiesenthal Center, during which they visited with more than 50 survivors of Islamist attacks.

“If things don’t change immediately, portions of Nigeria may soon become the most dangerous place on the planet.”

In December, the US State Department added Nigeria to its Special Watch List for countries that have engaged in or tolerated severe violations of religious freedom.

Moore called upon the US to appoint a special envoy and review all American assistance to Nigeria.

But he also echoed the Nigerian government’s plea.

“The best thing that Muslim, Christian, and other religious leaders in Nigeria—and around the world—can do, is to stand together in solidarity with the victims, instead of looking with suspicion and enmity at one another.”

Unfortunately, the federal government plays into the hands of conspiracy theorists, said Matthew Hassan Kukah, the Catholic bishop of Sokoto, a city in northwest Nigeria that he said was like the Vatican of Nigerian Muslims.

Kukah noted that all national security posts and most of Buhari’s advisors are Muslims. Previous administrations sought to balance their religious makeup.

Kukah was “surprised” by the information minister’s statement.

“In a diverse environment, people need a sense that power is being shared,” Kukah said.

“Buahri has made himself vulnerable to the accusations about complicity and the Islamization of Nigeria.”

The vulnerability is widespread. In its 2016–2018 cycle of surveys, Afrobarometer found 73 percent of Nigerians believe that some or most senior officials in the federal government support or assist extremist groups.

Only slightly lower figures were reported for members of the military (69%) and local government officials (65%).

Even so, 55 percent of Nigerians trusted the president “just a little” or “not at all.”

The Conference of Catholic Bishops invited churches to wear black for Ash Wednesday last week and then conduct a prayer march the following Sunday. Kukah also invited Muslims and made sure to coordinate with local security authorities.

Similarly, he wants Christians to work together with Muslims to prevent the spread of anti-government conspiracies, even as he calls its efforts “clearly not enough.”

“We wore black to focus on the killings across Nigeria, and not just of Christians,” Kukah said.

“We wanted to claim moral authority in this conversation, that this Lenten season we are mourning for the whole country.”

But according to John Hayab, a Baptist pastor and vice president of CAN for 19 northern Nigerian states, most of which are Muslim-majority, not all Muslim leaders cooperate.

Many understand Christians, he said, and he partners with one in particular to preach a message of being one family under God. Other Christian leaders recently hosted Muslims in their Lenten fasts.

But the terrorists have made others afraid to speak out in defense of Christians, while others use the message of hate for political gain.

But by 2014, this figure dropped to 22 percent. And only 10 percent of Nigerian Muslims expressed favorable opinions toward Boko Haram, with 80 percent negative.

Yet in 2017, 20 percent of Nigerian Muslims had a favorable view of ISIS, to which a branch of Boko Haram swore allegiance at the time.

Hayab said the government statement is “better late than never.” But he characterizes the jihadists’ strategy much differently.

“They are trying to make us live in fear and not identify publicly as Christians,” he said.

“It is not just to divide Nigerians, but to eliminate Christianity and stop evangelism.”

Some in his area have begun wearing Muslim clothing to blend in. Young evangelists have left the area. And over the past 12 months, $1.1 million in ransom has been paid by Christians to secure release of captives, he said, a process in which he has mournfully participated.

“Our leaders have lived in denial, saying ‘No, no, no,’” Hayab said. “What we want to see now is concrete steps to find solutions, because our cry has always been legitimate.”

“Neither Nigerians nor the international community should confuse the intentions of the Government of Nigeria—which is committed completely, resolutely, and in full unity, to defend the right to life of all citizens,” Mohammed, the information minister, told CT.

“And every individual’s God-given right to follow the faith of their choosing.”