With a disproportionate number of the majority-Buddhist nation's outbreaks linked to church gatherings, is it religious persecution to punish leaders of the minority faith?
David Roach
May 22, 2020 2:25 PM 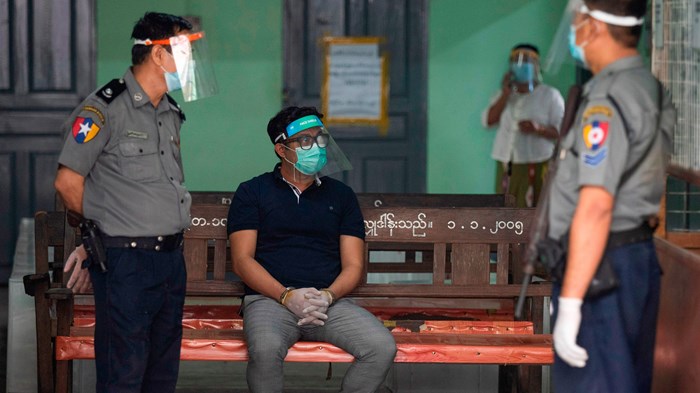 A pastor in Myanmar who claimed Christians would not contract the coronavirus and then became infected himself is being charged with defying public assembly restrictions. His detractors, including fellow believers, say he held religious services illegally amid the global pandemic. But an international religious liberty watchdog claims that authorities in the majority-Buddhist nation are unfairly targeting the church.

Canadian Burmese pastor David Lah and Myanmar national Wai Tun were arrested last month by authorities in Myanmar, also known as Burma, for allegedly holding worship services in Yangon despite a restriction on large public gatherings aimed at curbing the coronavirus pandemic. One worship gathering led to a cluster of 67 COVID-19 infections.

Lah, founder of DREAM Ministry International, was among those who fell ill despite stating in a March sermon, “If you hear the sermon of God, the virus will never come to you.” He was hospitalized and then quarantined for 21 days before being remanded to prison.

Following a May 20 court appearance, the judge told journalists that Lah would remain in jail while authorities investigate his case. He and Tun could face up to three years in prison, and three others could be charged in the case.

Yet public health is not the sole issue in Lah’s case, said Jeff King, president of International Christian Concern (ICC).

Lah did not blatantly defy Myanmar’s assembly restrictions, King told CT. After COVID-19 interrupted his plans for a large gathering, he transitioned to online services. However, about a dozen “excited followers” showed up as he livestreamed an event. One of them was a coronavirus carrier, and a cluster of infections resulted.

“We’re not fans of superstitious comments” like Lah’s claim that Christians are immune from COVID-19, King said. “But this case just smacks of persecution.” He is “not the only one who disobeyed the ban. So where’s the lineup of Buddhists who have been charged?”

Last month, the US Commission on International Religious Freedom (USCIRF) recommended that the American government continue to designate Myanmar as a “country of particular concern” (CPC) for engaging in or tolerating severe violations of religious freedom. Though the role of Myanmar’s military in the killing and displacement of Rohingya Muslims has been its most publicized instance of religious persecution, some Christians in the Southeast Asian nation also “are targeted for their beliefs,” USCIRF stated.

Myanmar’s Christians—who comprise 6 percent of the majority-Buddhist population—are split in their reactions to Lah’s case. Some are upset with the controversial pastor and believe he should be punished, said Gina Goh, ICC’s regional manager for Southeast Asia. Others sympathize with him and favor either a light punishment or deportation.

Among Burmese Christians who see Lah in an unfavorable light is Jeffrey Pau Do Lian, a Baptist pastor from Myanmar working on a PhD at Concordia Seminary in Indiana. Elevating Lah as a persecuted Christian could harm the cause of religious liberty in Myanmar because he was not imprisoned for his faith, Lian told CT.

Lah was “not arrested for preaching Christ,” he said, but for “breaking the rule of the guidelines.” He added, “It is not Christian persecution.”

The case has attained notoriety in Myanmar, thanks in part to celebrities and government officials among Lah’s followers. Vice President Henry Van Thio has supported the controversial pastor, as have members of the Burmese rock band Iron Cross. The vice president has tested negative for COVID-19, but Iron Cross lead singer Myo Gyi contracted it.

In Iraq, for instance, some Muslim background believers already were isolated from their communities. Amid COVID-19, they have been cut off from food assistance, ICC reported, leading to a dire humanitarian situation. In Pakistan, Christians likewise have been denied food aid in a Muslim-majority region near Lahore.

In Nepal, a pastor was arrested in late March for praying with a sick woman and her husband. The government claimed he was spreading false information about the coronavirus pandemic and imprisoned him for two months.

“Some governments are using [COVID-19] to turn the screws” on Christians, King said.

In Myanmar, a disproportionate number of confirmed COVID-19 cases among Christians may be helping to fuel the government’s crackdown against ministers. Of 193 cases reported nationwide as of mid-May, at least a third can be traced to Christian gatherings.

Lah is due in court again June 3.