In conflict over Muhammad cartoons, French evangelicals rally behind their president’s defense of secularism. But brethren in the Middle East are torn.
Jayson Casper|November 10, 2020 06:00 AM
العربية 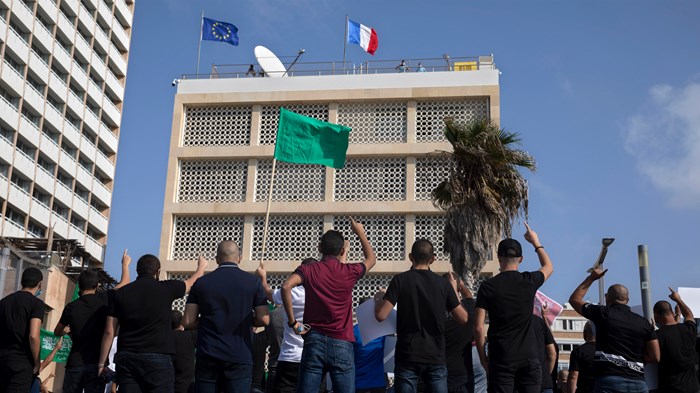 French authorities insist that “Islam is in crisis.”

A teacher was beheaded in the streets last month. Three Catholics were knifed at church.

And around the world, Muslims are protesting religious cartoons.

The French reaction has been firm.

“We will defend the freedom that you taught so well, and we will strongly proclaim the concept of laïcité [secularism],” President Emmanuel Macron said of Samuel Paty, the slain teacher who used the infamous Charlie Hebdo caricatures of Muhammad in a class discussion about freedom of expression.

“We will not disavow the cartoons, even if others recoil,” Macron added.

And the official reaction has been swift.

A mosque that shared a video venting hatred toward Paty—prior to his murder—was shut down for six months. A Muslim charity linked to extremism was dissolved.

Meanwhile, a recent poll indicated 87 percent of the French believe that “secularism is in danger.” An additional 79 percent believe that “Islamism has declared war on the nation and the Republic.”

Turkey’s President Recep Erdogan called for a boycott of French products. Mahathir Mohamad, former prime minister of Malaysia, said Muslims have the right to “punish” the French, and “kill” them for their past atrocities.

Ahmad al-Tayyeb, Grand Imam of Egypt’s al-Azhar, led the Abu Dhabi–based Muslim Council of Elders in a call to sue Charlie Hebdo. The crisis has renewed the Muslim cry for an international law to ban the defamation of Islamic symbols. Others would broaden it to ban defamation of religion in general.

CT spoke with eight Christian leaders in the Arab world about the controversy, as well as a representative of France’s evangelical community.

“French evangelicals, like moderate Muslims, support the authorities in their fight against Islamism,” said Thierry Le Gall of the National Council of Evangelicals in France (NCEF), “while ensuring the preservation of freedom of conscience and religion.”

Macron’s crackdown has a context. Having long identified the “separatist” Muslim neighborhoods of France as potential breeding grounds of extremism, the French president announced on October 2 a series of new regulations.

Imams are no longer to be imported from abroad, but trained locally in partnership with the official French Council of the Muslim Faith (FCMF). And from the age of three, children are to be educated in French schools, to aid in their national and social integration.

The rector of the Grand Mosque of Paris backed Macron’s initiative, counseling that Islamism—a political interpretation of the faith—is not the same as Islam.

Le Gall said French evangelicals are also often misunderstood by society, and offended by Charlie Hebdo’s irreverent depictions of their own faith. But there is a “tacit agreement” in France to tolerate religious criticism in exchange for everyone’s freedom of expression.

Unfortunately, the official Muslim council only represents a minority of France’s five million Muslims, said Le Gall, who directs NCEF’s pastoral service to parliament. He urged more Muslims to work with authorities for the common good.

Instead, France is suffering what he called a dichotomy of worldviews.

“Freedom of expression in its most provocative form,” he said, “is attacked by the most radical followers of the prophet of Islam, who dream of establishing a Muslim theocracy in France.”

“The line should be drawn when freedom is used to undermine freedom,” said Habib Malik, son of Charles Malik, who was the Lebanese co-author of the Universal Declaration of Human Rights.

“I am fully and completely with Macron, to take the severest measures.”

Malik, a Roman Catholic, agreed that the cartoons are a “debased and vulgar use of art.” But he believes there should be no restrictions on freedom of expression, even as “Jesus and his mother are attacked a million times a day.”

It is “inconceivable” for a Christian to plot revenge, he said.

Europe has erred, Malik believes, in assuming Muslim immigrant communities driven by economic concern would also adopt Europe’s prevailing worldview. Unlike the primarily Christian Hispanic immigrants in the United States, too many of Europe’s Muslims “do not understand the meaning of freedom.”

Egypt’s Anglican Archbishop Mouneer Anis takes a different legal approach, backing al-Azhar in its call to sue. But he arrives at a similar religious conclusion.

“Freedom of expression should be guaranteed for everyone, as long as it is not used to offend,” he said. “Jesus is against hurting others.”

Anis has previously called for an international ban on the defamation of religions, including Christianity. If ever drafted by the United Nations, it would be “reasonable,” avoiding the problems with blasphemy laws in certain countries of the Muslim world.

But whenever it exists, the archbishop will not make use of it. Christians are accustomed to criticism, he said, and simply trust in what they believe.

“We differ in our faith,” said Anis, noting that Jesus was called “Beelzebub.” “We should not ask our Muslim friends to act like us.”

His Anglican colleague, Archbishop Ezekiel Kondo of Sudan, also supports a blasphemy law. But he esteems it in conjunction with the North African nation’s recent repeal of its law against apostasy.

“But I should not be insulted.”

Le Gall emphasized that in France, Kondo’s insistence is honored. While France’s blasphemy law was outlawed in 1881, insulting people for their religious convictions can result in a year in prison and a $50,000 fine.

But 1881 also marked the year France guaranteed freedom of the press. Charlie Hebdo ridiculed Islam as a religion. Le Gall does not expect any lawsuit will succeed.

Yet there should be an international ban to prevent it, said Botrus Mansour, chair of the Convention of Evangelical Churches in Israel.

“Freedom of expression is above all other rights, and has almost absolute value,” he said.

“But the value of life is even higher.”

The terrorism that emerges from Europe’s immigrant communities reflects what has long been experienced in the Middle East, said Mansour. When Westerners used their freedom to attack Islam in earlier eras, Muslims directed their outrage toward local Arab Christians.

“It is better to be wise and cautious than to be right,” Mansour said. “Practice self-restraint to live together with respect.”

Malik does not approve of the appeasement.

Arab Christian support for outraged Muslims, while commendable on one level, stems from an inherited sense of dhimmitude, he said. Under centuries of Muslim rule, the Christian dhimmi accepted second-class status and paid a special tax in order to be a protected community. (Some Christian sources in the region declined interviews, citing the issue’s “sensitivity.”)

But Anis rejected this accusation, appreciating the Muslim Council of Elders for condemning Paty’s murder. In calling for restraint, they pursue a non-violent legal response.

And Egypt’s Tayyeb did not endorse the boycott, he noted.

Martin Accad, chief academic officer at Arab Baptist Theological Seminary in Beirut, said it is “rubbish” when Christians standing with Muslims are accused of dhimmitude.

But he stands with Malik—and many Muslim friends—in calling current Muslim outrage “childish.”

Christians grow up hearing harsh words against their faith every Friday from the mosque, he said. His first reaction to Paty’s murder was to recall his own frequent use of the Muhammad cartoons—with apologies for their offensiveness—when teaching on Christian-Muslim relations.

Accad is not afraid. But too many are forgetting the real victim, he said.

“It is like condemning the woman being raped, saying she shouldn’t have been wearing a miniskirt,” said Accad.

“The behavior of these countries is reprehensible.”

Criticism—even insult—produces maturity in the believer, he said. The proper response is dialogue.

“The Muslim has to understand that freedom of speech is sacred to the French,” said Accad.

“Muslim sensibility to the divine is culturally equivalent to the French belief that they have the right to say whatever the heck they want.”

The consequence, said Imad Shehadeh, president of Jordan Evangelical Theological Seminary, is a loss of credibility.

While there must be space for respectful criticism, ridicule is never welcome. But since both “space” and “ridicule” are hard to define—and to legislate—winsome models are needed.

Founding the Arabic-language Christian satellite network in 1995, Ascott realized the gospel could now bypass the traditional means of Middle East censorship. But rather than use this license to attack other religions, his Christian broadcasters nurtured long-term relationships with their viewers and won the right to present their own faith.

“Freedom of the media is a precious commodity and should be fiercely protected,” said Ascott, “but so that it can act as salt and light, always seeking the greater good.”

And Europe is hardly guiltless, argues Salim Munayer, director of the evangelical Musalaha reconciliation ministry in Jerusalem. France’s colonial past and current policies have damaged its reputation in the Middle East.

And even in the West, freedom of expression is not absolute. Subject to law are certain taboos surrounding sexual identity, racial caricature, and an anti-Semitism that can sometimes include criticism of Israel.

So while freedom of speech must be advocated around the world, he said, some are using the Muhammad cartoons to stigmatize and oppress Muslims.

But even when unaware, the West imposes an agenda.

“Secularism is not neutral and all-welcoming,” said Munayer, noting its Christian world origins. “It is dictated by a narrow understating of religion and its place in society.”

In France, Le Gall said, some are aggressively promoting this vision.

There is a great temptation to “hit Muslims hard” in this presidential election season, he said. Recent events have only increased the existing distrust.

But ever since the French revolution, he said, there has been a minority seeking to neutralize the expression of religion in the public square. To them, faith is fine—if it is private.

The real risk, Le Gall concluded, is that the fight against radical Islam will reduce the religious liberty of all.

In the past, France has been reluctant to target Muslims alone. Thus, evangelicals sometimes feel sacrificed on the altar of “equality.”

So beyond engaging parliament, some cooperate with Muslims. Addressing local needs to alleviate poverty, they also try to reduce community tensions.

French evangelicals understand the stigma. But like Macron, they hold firm to their principles.

“We have compassion for the Catholic victims,” said Le Gall, “and sympathize with moderate Muslims unwillingly associated with these crimes.

“But the values of the Republic—and of secularism—must always be defended.”

[ This article is also available in العربية. ]