Armenian and Azerbaijani Christians find comfort in the Scriptures and fervent prayer as the war in the Caucasus takes a dramatic turn.
Jayson Casper|November 9, 2020 12:58 PM 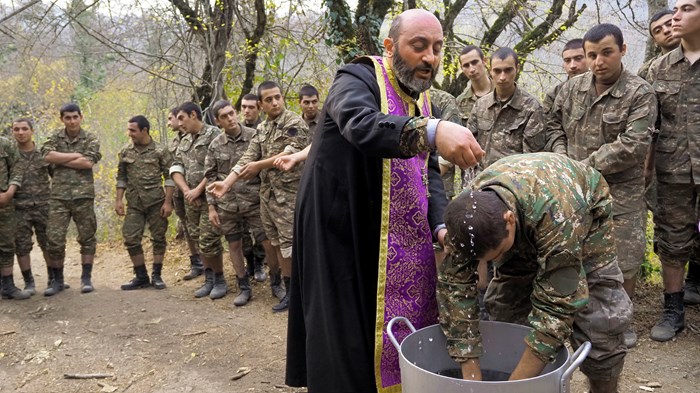 Update (Nov. 10): Armenia and Azerbaijan have agreed to end the fighting over Nagorno-Karabakh, in a deal involving territorial concessions and Russian peacekeepers.

The Armenian mountain stronghold of Shushi is under attack.

The second-largest city of Nagorno-Karabakh, one of its oldest artifacts is a 15th-century Bible. Earlier in the conflict this year, its 19th-century cathedral was struck twice and damaged by missiles.

But Azerbaijanis—who call it Shusha—celebrate it also as a cultural heritage. Many of their famous poets and musicians hail from the once-mixed city.

As the six-week war progressed, Azerbaijan steadily retook the plains below. But facing the coming winter, its military faced a stark choice: impose a siege, or scale the mountain.

Without Shusha, President Ilham Aliyev said, the job is only half done.

Despite its Armenian-majority population, Nagorno-Karabakh was assigned to Azerbaijan in the 1920s by Joseph Stalin. Both nations became independent in 1991, and the mountainous enclave conducted a referendum to declare itself the Republic of Artsakh. Ethnic warfare gripped the region, with 30,000 killed and around 1 million displaced.

Population transfers largely emptied each nation of its opposite ethnicity.

At the time of the ceasefire in 1994, Armenians controlled roughly 20 percent of Azerbaijan. No nation recognized Artsakh, and internationally sponsored negotiations began—and eventually stalled.

But buoyed by a financial windfall from oil and gas exports to Europe, as well as advanced weapons from Israel and Turkey, in late September Azerbaijan pressed its military advantage. If successful, it will perch above Stepanakert, the capital city of Nagorno-Karabakh, only six miles away.

“After 28 years, the adhan [call to prayer] will be heard in Shusha,” celebrated Aliyev. “Our victory march continues.”

“So far, Armenians have successfully pushed back all attempts to take over this homeland,” said Harout Nercessian, the Armenia representative for the Armenian Missionary Association of America (AMAA).

“We will never surrender Shushi.”

But within the debate over whether the conflict with Muslim-majority Azerbaijan is a religious war with Christian Armenians, signs of faith, piety, and pleas for divine favor mark many of the partisans, including the Armenian president.

“These very brave people are like the story of David and Goliath,” President Armen Sarkissian told Christian broadcaster CBN News.

“They are facing an enormous enemy that wants to destroy a whole civilization—a culture, religion, and people.”

Sarkissian refers not only to Azerbaijan, but to Turkey. Though the nearby country to the west is not directly involved in the fighting, copious reporting contradicts Turkish denials that they have transferred in militants from Syria.

Turkey has failed to support three previous ceasefires, mediated by Russia, France, and the United States.

Its president also appeals to scripture.

“Indeed, we have given you a clear conquest,” Recep Erdogan recited from the Quran in a military video circulated before the conflict began. “And Allah may grant you a mighty victory.”

Comparing additional military forays into Syria and Libya with the Ottoman conquests of old, he said expanding the Turkish empire is not occupation, but “establishing the dominance of the justice that Allah commanded.”

Turkey’s support for Azerbaijan, Erdogan said, is “fulfilling the mission our grandfathers have carried out for centuries in the Caucasus.”

Statements such as these worry Armenians about a renewed genocide.

Their calls for help have fallen on deaf ears.

“These are days of widespread concern for the wider Middle East region,” stated the Union of Evangelical Churches in the Near East in a communique released October 29. “What befell Armenians a century ago has shown itself once again in our lifetime.”

American evangelical and other Christian leaders expressed their concern in a public petition. Russell Moore, president of the Southern Baptist Ethics and Religious Liberty Commission; James Chen, vice president for global operations at the Institute for Global Engagement; and Frank Wolf, former congressman from Virginia and architect of the US’s International Religious Freedom Act, joined 33 others in asking the American administration to “forcefully condemn Turkey, and its proxy Azerbaijan.” The petition noted aggressive Turkish opposition to fellow NATO allies, and even its recent claim to Jerusalem.

“We cannot sit by as Azerbaijan, backed by Turkey, openly works to cleanse Artsakh of its Armenian people and heritage,” said Robert Nicholson, president of the Philos Project, which sponsored the petition.

“These are our allies. Silence and inaction on our part is the same as support.”

Nicholson emphasized the need for strong diplomacy, not military action. But he said Armenia is a “moral cause,” a Christian nation landlocked between powerful Turkic states.

“Erdogan, an erratic demagogue, denies the genocide and regularly invokes Islamic themes of jihad and conquest,” he said.

“The Armenians take Erdogan at his word, and we should too.”

Armenia was the first nation to adopt Christianity as its official religion, in A.D. 301. Tradition states Bartholomew and Thaddeus founded the Armenian Apostolic Church, which today constitutes 93 percent of the population.

During the long decades of Soviet control, atheism was preached in schools, and faith forbidden.

But there are no atheists in foxholes.

“The baptism cleansed us,” said Tigran Kagramanian, an 18-year-old recruit, “and helped us forget about the horrors of the war.”

These horrors include 1,200 dead, according to the Artsakh Defense Ministry.

But the church also has a message for the grieving.

“We tell them this is a holy war,” said Narek Petrosyan, a church deacon. “We are prepared to sacrifice our lives for each other.”

Nercessian said baptism of infants became more common after the nation’s independence in 1991. But many soldiers are the children of a nonreligious era, while volunteers and mobilization have drafted in many men under age 50.

“I cannot imagine any soldier refusing baptism, except a handful,” said Nercessian. “Christians are praying for spiritual revival as a result of this heinous war.”

Emphasizing it is an ethnic—not religious—conflict, Nercessian shared how the AMAA is providing humanitarian aid, distributing food, clothing, medicine, and New Testaments to refugees fleeing the conflict.

Sergey Rakhuba, the Russian-born president of Mission Eurasia, said the Armenian government is actively encouraging spiritual support. His ministry’s outreach has included a Gospel of John included in over 10,000 food packages, containing enough to feed a “desperate” family of five for one week.

About 90,000 people in Nagorno-Karabakh—60 percent of its population—have been displaced from their homes. Azerbaijani missiles have hit hospitals and schools.

Eric Mock, vice president for ministry with the Slavic Gospel Association, said their aid packages have assisted churches in providing shoes, blankets, and food. Barefoot refugees take shelter and sleep in the basements.

As they flee, Nicholson warned that this conflict risks emptying one of the last remaining free Christian communities in the Near East. Only in the West, he said, is there a divide between religious and national identity.

Armenians, like many in the Caucasus, consider their faith and their citizenship one and the same.

“And if you think no one on the other side thinks in similar terms,” he said, “pay more attention.”

As the conflict began, the 57 member nations in the Organization of Islamic Cooperation (OIC) condemned Armenia’s “repeated provocations and aggression,” calling for dialogue and a political solution.

Three weeks ago (October 14), the OIC reaffirmed its solidarity, extending condolences to “the families of the Azerbaijani martyrs.”

But according to Vadim Melnikov, an evangelical Azerbaijani who fought the Armenians in an earlier conflict, his government has not engaged in religious rhetoric. On the contrary, the military makes a conscious effort to prevent namaz, the Azeri word for Islamic ritual prayers.

Aliyev perceives a threat to the state from radical Islam, not internal Christianity, said Melnikov.

“The vast majority of Azeri soldiers are nominal Muslims, and the government does not allow the Quran in the army,” said the pastor of a home fellowship in the Vineyard church.

“If Azerbaijan became an Islamic state, the potential for religious war would increase dramatically.”

The Bible, however, has been permitted among soldiers.

Ibrahim, a 25-year-old outreach minister in Melnikov’s church, was drafted to the front lines and brought his New Testament. Questioned at the recruitment office, he was allowed to keep it. Boarding the bus, officials even told his friends and relatives to pray for him.

Vineyard is faithful in the task. The church has organized prayer for each of its 120 Christian members on active duty. And for the nation, its members are fervent in intercession.

“This war is justice, this war is yours,” prayed Kamil Kerimli in a video officially shared by the church. “May every inch of land be restored! The whole motherland of Azerbaijan!”

Vineyard has exhausted its funds providing humanitarian aid to civilian areas damaged by Armenian attacks, Melnikov said. The church is also sending care packages to its soldiers, including Bibles.

So does Mission Eurasia, for the refugees. Around 40,000 Azerbaijanis have been displaced by the fighting.

Initially hesitant due to strict government regulations on the import and distribution of religious literature, Mission Eurasia instead includes Scriptures already in country. But sensitive to the majority-Muslim recipients, Rakhuba said his group does not force the Bible on anyone.

Working with Samaritan’s Purse, they have assisted local churches to distribute 1,000 aid packages so far.

Both charities said it can be challenging to serve both sides.

Rakhuba said it raises suspicion, but by being transparent they win trust. Even so, some local churches have shied away from association with Mission Eurasia, citing government sensitivity.

But there is also a hint of not wanting to help the Armenians, he said.

Mock described “heartbreaking” stories from both sides, along with considerable anger. Out of respect for their patriotism, the Slavic Gospel Association does not “trumpet” the fact they are actively serving refugees in both Armenia and Azerbaijan.

“It is not that we are taking no side,” Mock said.

“We are taking the side of Christ.”

Nercessian and Melnikov believe that in Jesus, the two ethnic churches are one body. But of the disputed enclave they employ separate names, and they interpret the will of God differently.

“After the end of war, there must come reconciliation and mutual repentance,” said the Vineyard pastor, within Azerbaijan’s restored territorial integrity.

“Then Azeri and Armenian people can hug like brothers, and live together in Nagorno-Karabakh.”

Nercessian, the Armenian missionary, says the national resolve remains strong. And personally, he has never felt closer to God.

“I constantly pray for spiritual revival, victory for our people, and international recognition of the Republic of Artsakh,” he said.

“God is in charge of history, and I am convinced beyond any doubt that he will end this war with a stronger Armenia.”