Though pleased with the draft’s overall democratic reforms, leaders are frustrated that “Christian rights do not matter” in the West African nation.
Jayson Casper|October 12, 2020 08:10 AM 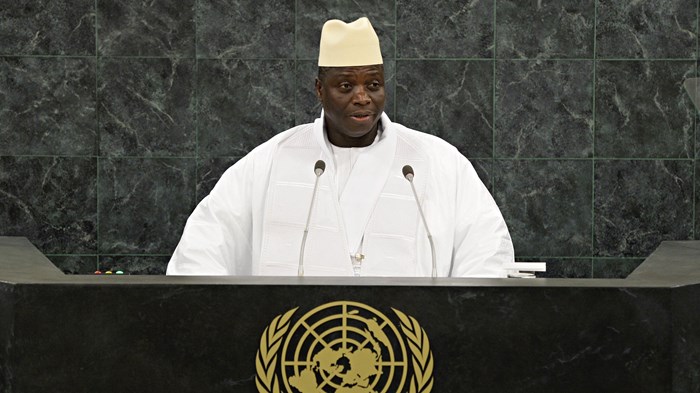 The Gambia almost had a new constitution.

Instead, the English-speaking, sliver-shaped West African river nation—known for Muslim-Christian coexistence—will return to the 1997 constitution instituted by former dictator Yahya Jammeh and amended by him more than 50 times to entrench his power.

One year before being deposed in 2016 by popular protests, Jammeh declared Gambia to be an Islamic state.

The new draft constitution would have imposed term limits on the president, guaranteed religious freedom, and forbidden any future declaration of a state religion.

Yet many of the nation’s Christians, who comprise only about 5 percent of the population, still feel like they dodged a bullet.

“Truly important positive changes were made in this [draft] constitution,” said Begay Jabang, a member of the Gambia Christian Council (GCC) campaign team, naming the separation of powers and the strengthening of the legislature. “This would have been a significant step forward given the history of our nation.

“But at the same time,” she said, “provisions were introduced in the judiciary that would have changed the face of our nation, moving it down the path of an Islamic state as Jammeh did before.”

The official GCC statement outlined the changes in detail, and was blunt in its assessment.

“The deafening silence of [political leaders] to the concerns we have repeatedly raised,” it stated, “has been read as a message that ‘CHRISTIAN RIGHTS DO NOT MATTER [sic].’”

Current head of state Adama Barrow was elected as an interim president as a consensus choice between the coalitions that deposed Jammeh, and he pledged to serve no more than a three-year term.

In 2017, the National Assembly created the 11-member Constitutional Review Commission (CRC), and over the three years that followed conducted 106 meetings throughout the country.

Their cemetery in the capital of Banjul was threatened with closure. The veil was made mandatory, even in Christian schools. Arabic inscriptions were written on public institutions. Mosques were constructed within government buildings. And some official figures—including the former president—publicly disparaged the Christian religion.

But despite his promise, Barrow reneged and declared himself a candidate for president in upcoming elections. And lawmakers from his party and allied coalitions voted against the new constitutional draft, ensuring it did not reach the required threshold of 75 percent. Not only did the draft place term limits on the presidency, it retroactively counted Barrow’s now four years in office.

Scheduled for referendum in 2021, the new constitution would likely have passed. According to AfroBarometer, 87 percent of Gambians agreed with term limits, and 86 percent favored legislative approval of cabinet appointments.

But concerning to many Christians were religious modifications that may have run against the grain of widespread political support.

Asked to choose whether they preferred their nation be primarily governed by religious or civil law, 60 percent of Gambians signaled “strong” support for civil law, and 70 percent overall.

But in the draft constitution, historic Muslim family law courts were renamed “sharia courts” and given jurisdiction over Christians in interfaith marriages and families. They were also established at a Supreme Court level, parallel with the common law system.

Christians also noticed that the constitution did not “entrench” a section related to the Laws of the Gambia which includes common law, customary law, and sharia. Currently, sharia is limited to family law, but it could be amended in the future to include banking and criminal law.

Altogether, they counted the word sharia 44 times in the draft.

In contrast, the word secular was removed altogether.

“I want Gambia to live in peace, which is a religious peace,” said Omar Jah, the Gambian pro-vice chancellor of the Islamic University of Technology in Dhaka, Bangladesh. “[Peace] was natural, and we developed it in the absence of the word secular.”

Jah, who previously served 14 years in the University of Gambia, was a member of Concerned Citizens, a group that advocated keeping the term secular out of the draft constitution. It was one of Jammeh’s illegal amendments—prior to his Islamic state turn—and to them represented a foreign secular agenda meant to transform Gambia’s traditional religious nature.

Christians agreed it was an illegal insertion. But the CRC’s initial mandate was to “safeguard and promote Gambia’s continued existence as a secular state.”

After initial protests, and the intervention of Thomas Schirrmacher, the World Evangelical Alliance general secretary for interfaith religious freedom, the GCC decided to focus on the content of “secular,” rather than the term itself.

Gambia is in the middle of two global agendas, secular and Islamic, said the German theologian. For the former, his foreign minister pressured politicians to tie German aid to Gambia on its support for same-sex marriage, before relenting.

Schirrmacher’s visit was providential. He arrived in Gambia on the last flight to leave Germany before COVID-19 restrictions shut the airports.

“We convinced them they will not win if they insist on secular and no sharia,” said the WEA leader, whose connections to Gambia trace back to childhood when his parents supervised missionary outreach.

“If they drop this, they can win the moderate Muslims.”

Convinced, the GCC entered into partnership with leading Muslim figures in Gambia, providing a joint statement to the review commission in March. They suggested alternative wording for the concept of “secular,” and clarification on the version of “sharia.”

This led to the joint creation of their interfaith platform “Sunu Reew,” which means “Our Country” in Wolof, the national language.

Up until the last minute, they petitioned the CRC, Barrow, government officials, and the National Assembly to take up their concerns. Muslims also wanted to retain the freedom to access the civil courts for personal status, if they so desired.

Some consideration was given, but the expanded sharia language remained.

“Where are we headed as a country, when one particular religion is being entrenched in the constitution, dividing rather than uniting us?” said Lawrence Gomez, the Gambian associate regional secretary for the International Fellowship of Evangelical Students.

“But God, in his way, paused the process to allow us as a nation to reflect on this national document, from our conscience and not our fear.”

And now, after three years and $2.2 million, Gambia returns to square one.

Disappointed religiously, Jah is glad that at least the term secular is now off the table.

Disappointed politically, Gomez is glad that at least the Muslim-Christian issues are now being discussed.

Jabang is disappointed about how the constitutional process divided what was once a more united people. But even in failure, it has finally brought Christians and Muslims to the table of dialogue to have mature conversations about religion, politics, and the future direction of the nation. Each had stayed in its separate world for too long, she said.

Politicians are divided about what to do next. Suggestions include piecemeal amendment of Jammeh’s constitution, another effort at rewriting, and reviving this draft effort before parliament.

The GCC has recommended that the government form a team of “competent, objective, unbiased professionals” to resolve disputed passages.

The European Union, meanwhile, urged Gambia to form a “new social contract” with a “new constitution at its core” before the 2021 presidential elections. Calling the vote a “setback,” the bloc urged completing the reforms necessary to entrench democracy, human rights, and the rule of law.

The EU made no mention of sharia, but did emphasize “national consensus.”

So with their nation in political limbo amid both domestic and international pressure, Gambian Christians remain concerned.

“We should all take a pause, think deeply, and come back to the table of dialogue,” said Jabang, “in order to find a win-win solution for our people.”

Correction: An earlier image showed Nigerian president Muhammadu Buhari arriving for a meeting with Gambian president Yahya Jammeh, instead of Jammeh himself. CT regrets the error.