With an abortion record opposite Ruth Bader Ginsburg’s, Barrett has said her faith does not shape her decisions behind the bench.
Mark Sherman – Associated Press|September 28, 2020 10:30 AM 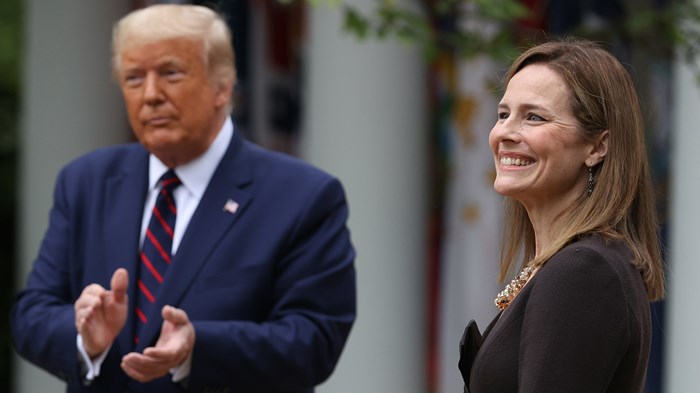 Amy Coney Barrett paid homage to Justice Ruth Bader Ginsburg in her White House speech Saturday as a shatterer of glass ceilings. She said she would be mindful of the woman whose place she would take on the Supreme Court.

The conservative Catholic even commented that her seven children think their father is the better cook, much as Ginsburg used to talk about her husband’s prowess in the kitchen.

But the replacement of the liberal icon Ginsburg, the second woman to serve on the high court, by Barrett, who would be the fifth, would represent the most dramatic ideological change on the Supreme Court in nearly 30 years and cement conservative dominance of the court for years to come.

Barrett, a judge on the federal appeals court based in Chicago, made clear in her Rose Garden address that she looks to conservative Justice Antonin Scalia, for whom she once worked, and not Ginsburg, on matters of law.

“His judicial philosophy is mine, too. Judges must apply the law as written. Judges are not policy makers,” Barrett said. She was referring to their common method of interpreting laws and the Constitution based on what they were understood to mean when they were written.

Ginsburg, who died this month at age 87, and Scalia were dear friends, but they were on opposite sides of the most divisive issues of the day.

Barrett’s conservative judicial record, her writings, and speeches suggest that she too would be Ginsburg’s polar opposite on a range of issues that include abortion and guns.

Conservative evangelicals have applauded Trump’s decision to nominate Barrett, who would be the third Supreme Court justice added during his term.

“There is no question that Judge Barrett is qualified by intellectual acumen and years of experience to serve on the highest court in the land,” said Russell Moore, president of the Ethics and Religious Liberty Commission of the Southern Baptist Convention. “I am praying for her, her family, and our nation in what are sure to be tumultuous days in the weeks ahead for the entire country.”

Ronnie Floyd, president of the SBC Executive Committee, also praised Barrett in a statement to the Baptist Press, saying she is “one of the most gifted legal minds in America today” as well as “a woman of deep Christian faith, a committed wife, and the mother of seven children.”

During her confirmation hearing in 2017, when she had been nominated to the 7th Circuit appeals court, she repeatedly clarified the relationship between her faith and her place on the bench.

“If you’re asking whether I take my faith seriously and I’m a faithful Catholic—I am, although I would stress that my personal church affiliation or my religious belief would not bear in the discharge of my duties as a judge,” she said after being asked about her Catholicism.

She went on to say, “It’s never appropriate for a judge to impose that judge’s personal convictions, whether they derive from faith or anywhere else on the law.”

Barrett has cast votes suggesting she would uphold state abortion restrictions that Ginsburg found violated the Constitution. Barrett has also been critical of Chief Justice John Roberts’ opinion upholding the Affordable Care Act, which is again facing a constitutional challenge at the Supreme Court. Ginsburg was one of five votes that saved the law on two prior occasions.

If Barrett is confirmed before the November 3 election, she would get a chance to weigh in on the latest lawsuit to overturn Obamacare, which is set for arguments a week later.

The backgrounds of Barrett and Ginsburg also are very different. Barrett is a Catholic from New Orleans. The Brooklyn-born Ginsburg was Jewish. Barrett had the chance to serve as a Supreme Court clerk. Ginsburg was able to secure a clerkship with a lower-court judge only after the intervention of a law school professor.

The contrast between Ginsburg and Barrett most resembles the differences between Justice Thurgood Marshall and the man who replaced him in 1991, Justice Clarence Thomas.

Marshall was part of the majority in the 1973 Roe v. Wade decision that declared a nationwide right to abortion. In his first year on the court, Thomas joined a dissenting opinion arguing that Roe should be overturned.

Marshall was a firm supporter of affirmative action programs in education and a fervent opponent of the death penalty. Thomas holds opposing views on both issues.