One month since the blast, emotional support comes from evangelicals, refugees, children, and other unexpected sources.
Jayson Casper|September 9, 2020 12:47 PM 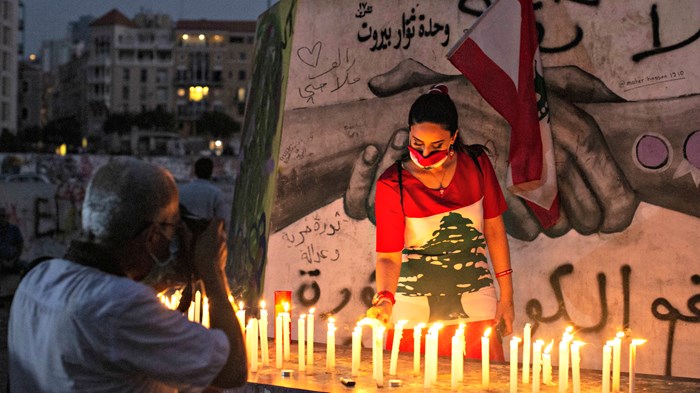 Image: Sam Tarling / Getty Images
A woman wearing a Lebanese flag-themed dress participates in a Beirut vigil to mark one month since the huge explosion in the capital’s port.

To a traumatized child, a teddy bear can make a big difference.

But as the handful of Lebanese evangelicals trained in counseling are emphasizing in the aftermath of the Beirut explosion, so can an ordinary individual.

“A lay person might be fearful of doing harm. But there is a lot they can do.”

There is a lot that needs to be done.

An impact assessment conducted by Strategy& in the worst affected neighborhoods of Beirut found that 3 in 4 respondents were suffering anxiety two weeks after the blast.

Nearly 7 in 10 were experiencing disturbing dreams, and 6 in 10 reported difficulty doing household chores.

And according to UNICEF, 50 percent of its respondents said their children were showing signs of trauma and extreme stress.

In the poverty-stricken Karantina district directly in front of the port, one child clutched a bag of distributed bread to his chest, rocking back and forth. Though by then such food was readily available, he was imitating the adults who fought and scrambled to grab their share in the first chaotic days of emergency response.

“He was the hungry kid, the frightened kid, and the active kid all combined in one,” said Mayhew. “He desperately wanted to show his parents he could also provide for his family.”

An MCC partner organization was already on the scene, having set up a mobile clinic and counseling sessions for the adults. Eventually they noticed the kids milling around, otherwise neglected by everyone.

So they created a camp-like setting in the neighborhood park. Rotating 40 children between eight stations, they played games, danced to music, and did artwork—activities experts say are essential for the emotional and spiritual processing of trauma.

And then each kid got a teddy bear.

“These kids are definitely traumatized, and lost so many of their toys,” said Joy El Kazzi, child protection officer for MCC. “It was great to see them able to smile.”

But as a Lebanese, Kazzi was in the minority. Most of MCC’s first responders were Syrians—refugees from war who experienced trauma themselves.

Long committed to psychological service, in 2012 MCC refocused its trauma training on Syrian refugees. After the explosion, the Syrians were prepared to help this new wound of their hosts.

But many Beirut residents were not ready to receive it—from anybody.

Evangelical churches and ministries were among the thousands of Lebanese volunteers who pitched in to sweep shattered glass, repair windows, and offer food to the broken city.

But as Anthony Ziade of City Bible Church conducted over 50 needs assessments in the immediate vicinity of his downtown congregation, only three people ticked the box for counseling.

“If you see a psychologist, it means you are sick,” he said. “No one will do that; it is the reality here.”

There is no similar stigma about receiving charity—Ziade agreed with 25 households to cover their basic repairs.

It is an honor and shame society, explained Smyrna Khalaf, a licensed marriage and family counselor and a professor at Arab Baptist Theological Seminary.

“Lebanese, especially men, want to look like they can handle things,” she said. “Women are less reluctant to admit their weaknesses, and seek help.”

But there is another factor involved, peculiar to Lebanon, said Celia Khater, chief counselor at Beirut Baptist School (BBS).

Lebanese pride themselves on their resilience.

Since 1955, BBS has emphasized both mind and spirit, so there is a greater appreciation for psychology among the 1,000 students and their parents. But when her team of three counselors reached out to the families to offer support, only a dozen or so responded.

Generation after generation of Lebanese have experienced war. And since October 2019, they have endured a popular uprising, the COVID-19 crisis, and economic collapse.

And now the explosion.

“Stability is the most important thing in the lives of children, but this year we didn’t even have one week of it,” Khater said.

“I expected more calls, but the Lebanese culture says ‘Khalas [enough], we can manage.’”

Given that 1 in 4 Lebanese have or have had a mental disorder, they do amazingly well.

“Symptoms will fade for many, but hundreds will need ongoing psychological support.”

Including their children. Those who suffer an adverse traumatic experience in Lebanon are eight times more likely to develop a mental disorder as adults.

Khater is counseling one BBS preschooler constantly breaking all his toys. Pressed for the reason, he responds with two words: “The explosion.”

“I wish we had a well-trained team of Christian counselors, ready to help in times of trauma, whose names are known,” she said.

“The secular world has its own organizations, but we as a Christian community do not.”

The above statistics were compiled by IDRAAC, the Beirut-based secular organization founded in 1997 as the first mental health initiative in the Arab world.

After the explosion it opened a hotline, as did the American University in Beirut Medical Center. Embrace has operated an emotional support and suicide prevention hotline since 2017, in cooperation with the Ministry of Public Health. Such groups prioritize public awareness campaigns, to remove the mental health taboo from society.

“The priority for the church is to preach Christ,” said Tony Skaff, pastor of Badaro Baptist Church, who believes the techniques of psychology can be helpful though they will fall short of full healing, without the gospel.

“But these secular organizations push me. I wish that we could have helped them first.”

Unaware to many, there is a Christian ministry on standby.

“Sometimes there is not enough information,” said Maya Saleh, trauma healing coordinator for the Bible Society of Lebanon. “But we are not unknown.”

Since 2015, her team has conducted trainings through the Bible-based Trauma Healing Institute, affiliated with the American Bible Society. There are around 300 facilitators, 25 of whom have told Saleh they can be on call.

After the explosion, she offered them to several dozen churches and faith-based organizations in Beirut, to train others or to assist with healing groups. Last week, they reached 28 children in Ashrafieh, one of the neighborhoods hardest hit by the blast.

Some children had witnessed blood dripping down the faces of their loved ones.

The Strategy& assessment found 31 percent of Beirut families were “severely impacted.” This included 16 percent suffering a serious injury, 7 percent forced to relocate, and 5 percent grieving the death of a relative.

But given that Lebanese have endured historic trauma, they are well prepared to minister to others. That is the hope of Resurrection Church of Beirut (RCB), and filters into their team of about 50 clean-up volunteers—37 of which received basic training in psychological first aid.

“Most people are not aware they need mental health care,” said Khalaf, an RCB member. “But in cleaning their homes and giving supplies, you listen to their story and offer support.

“It is not formal, but it is therapeutic.”

She explained that the signs to listen for are mood changes, restlessness, anxiety, and a desire to be left alone.

They tell people this is normal, and answer many spiritual questions.

They also gently inform of therapy options. But in most cases, Khalaf said, if people are helped in the beginning, they won’t need much ongoing care.

“A meaningful response to an explosion of this volume—that brings healing to the soul—doesn’t require a curriculum, but a person and a community,” said Hikmat Kashouh, pastor of RCB.

“Our civil war experiences help us stand with the traumatized, as those with old scars can tend to new wounds.”

Sometimes, it is the children who do the healing.

During the cooped-up months of COVID-19, evangelical satellite TV provider SAT-7 launched its Allo Marianne program. Aiming to provide a safe space for children to express their emotions, they had no idea how necessary the show would become.

After the explosion, host Marianne Awaraji encouraged viewers to draw, to ask questions, and to worship. She also asked them to pray for their friends in Beirut.

The lines were flooded with callers throughout the Arab world—praying for their friends at SAT-7.

“Our goal at SAT-7 is to always support the kids,” Awaraji said.

“But now, they felt it was their turn to support us.”

Back in Karantina, however, few families would still have satellite TV. And one month since the explosion, there remain far too few Lebanese therapists to meet the mental health needs.

But with the minimum training, MCC’s Mayhew reminded, anyone can help.

“Emotional scars are just as serious as physical scars,” she said.

“And restoring people to wholeness is part of the gospel, as people created in the image of God.”