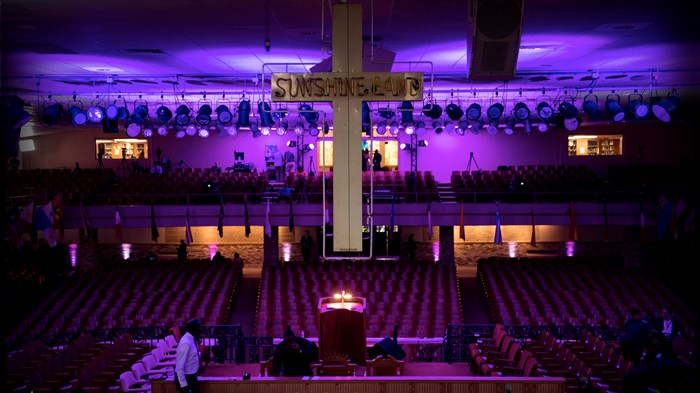 Giving to the Church of God in Christ (COGIC) fell by nearly 50 percent during the COVID-19 pandemic. The church’s new presiding bishop, who took office on March 20, said he will have to make finances a top priority his first year.

J. Drew Sheard Sr. has a full agenda for the 8.8-million member global church, which is the fifth largest denomination in the US. He has to fill vacant leadership roles, wants to develop programs to strengthen marriages and families, and hopes to unify COGIC after an unusually competitive election, with several bishops vying to lead.

But because of the coronavirus, Sheard will have to focus on the budget first.

Sheard, 62, is nonetheless confident that God chose him for this moment of leadership. Among other things, the seasoned minister—who is the son of ministers and grandson of a man ordained by COGIC founder Charles H. Mason—is good at math. Sheard is a former math teacher, with a master’s of education in mathematics.

“I believe the favor of God has been on my life since I was a younger preacher, and he has blessed me in every facet of my life as far as my ministerial career was concerned,” Sheard told the Commercial Appeal in Memphis, where the historic black Pentecostal denomination is headquartered. “I believe over the years, and I say this very humbly, I believe God has taken note of me that he could trust me.”

According to the Evangelical Council for Financial Accountability, about 42 percent of churches have seen giving decline during the pandemic. While the majority of evangelical churches in the US saw tithes remain steady or even increase, one out of five churches had to tap into cash reserves and reduce staff to make it through.

Pentecostal churches, where worship is often understood to be very physical, and African American churches, where the gathering of a community can be seen as testimony to God’s goodness, have been especially hard hit by the safety precautions limiting or prohibiting congregations from coming together.

While some churches have resisted health department recommendations and local government restrictions, COGIC called for strict adherence after numerous denomination leaders got sick with the coronavirus and at least a dozen bishops died.

In Michigan, where Sheard pastors at Greater Emmanuel Institutional Church of God in Christ in Detroit, three COGIC bishops and five superintendents were killed by COVID-19.

Sheard felt the tragedy at home, as well. His father and mother both contracted COVID-19, and his mother, Willie Mae Sheard, died in the hospital April 2020, about a year before she could see her son rise to lead COGIC.

“My mother was an encourager who encouraged everyone to be the best they could be,” Sheard told the Detroit News. “She believed in doing the right thing and being true to God.”

Black and Hispanic people have been disproportionately impacted, according to the Centers for Disease Control and Prevention. One study showed that 34 percent of people who die from the coronavirus are black, even though black people only make up about 12 percent of the US population.

The crisis led outgoing leader Charles E. Blake Sr., COGIC’s presiding bishop since 2007, to take a strong stance on public health rules. He called for a day of prayer and fasting to summon “heaven’s help in mitigating this dreaded disease,” and said that “all Church of God in Christ local, district, state and international gatherings should absolutely cease” until the pandemic is past.

The policy led to the decline in giving and the budget crisis that greeted Sheard on his first day. It’s a plight Blake can certainly sympathize with, since he inherited an $800,000 budget deficit when he took charge of COGIC 14 years ago.

In a 2016 speech, Blake said he knew a job promotion would bring new challenges, but leading COGIC was more challenging than he expected.

“The devil has some tricks that you’ve never seen before,” he said. “New level, new devil.”

Blake borrowed money to meet the church’s budget obligations but paid off the debt the following year and balanced the COGIC budget. He campaigned to increase giving $10 million by 2016 and instituted COGIC’s first-ever financial audit. The audit found an additional $10 million that had not been accounted for, as the denomination’s departments and ministries operated with increasing financial independence. Blake consolidated COGIC control of the departments and oversight of the budget.

Some of those COGIC ministries have rushed to meet the needs of the pandemic. The Department of Evangelism sent out 1,000 prayer cloths to replace the church’s practice of laying on hands to pray for healing, and hosted regular weekly prayer gatherings online.

“They pray the old fashioned way, calling on the name of Jesus,” Bishop Elijah Hankerson III said in a recent report. “The flame of evangelism has never gone out. And it won’t ever go out until Jesus comes back.”

Ministers in the department typically receive honorariums for their committee work, but everything in 2020 was done on a volunteer basis. So far, Hankerson said, they have also not been paid in 2021.

Sheard will have to look for other ways to save money as he sets the budget for the coming fiscal year. Top leaders in COGIC have expressed confidence, however, that he is the man for the job.

Bishop David Hall, pastor of Temple Church of God in Christ in Memphis, called the new presiding bishop a “visionary.”

“He can see beyond those things that are immediate,” Hall said, “and he puts a long plan to them.”