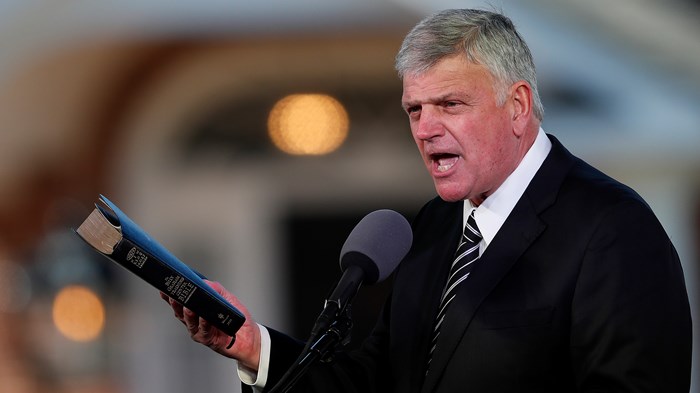 Update (July 16): The British city of Blackpool must apologize for removing Franklin Graham ads from public buses, admit the act was discrimination, and pay the organizers of the Lancashire Festival of Hope a total of 109,000 pounds (the equivalent of about $150,000).

Judge Claire Evans handed down the terms on Friday morning, with agreement from both sides. The city published the apology on its website and must pay the fines in one week.

The court calculated the cost of removing the bus ads at 84,000 pounds for the Festival of Hope’s legal fees and an additional 25,000 for “just satisfaction,” because the city violated the UK Human Rights Act of 1998.

When the city removed the ads, it claimed this was necessary because of “heightened tension” caused by Graham’s position on LGBT issues. But internal emails showed officials expressing their own disapproval of Graham and looking for a legal reason to stop the advertising campaign. Roughly 200 area churches sponsored Graham’s event, which was attended by about 9,000 people.

“This is an important moment for religious freedom in the UK,” Graham said in a statement to CT. “We’re grateful to God for the final outcome of this case, and for what it will mean for churches and Christians across the UK in the years ahead. The Good News of Jesus Christ must be proclaimed. My prayer is that this case will encourage Christians to stand firm.”

The terms cannot be appealed and the court order is public, so the case can serve as a precedent in British law.

“A pluralistic tolerant society allows for the expression of many different and sometimes diametrically opposed beliefs,” she wrote.

In its official apology, the city acknowledges that the advertisements themselves were not offensive, even if some find Graham’s beliefs about same-sex relationships offensive. They described the act of removing the ads as discrimination.

The city now has new policies for bus advertisements. The new policy says the city will reject ads deemed “likely to cause widespread or serious offence to members of the public,” but also states the city is “fully committed to meeting its obligations under the Human Rights Act 1998.”