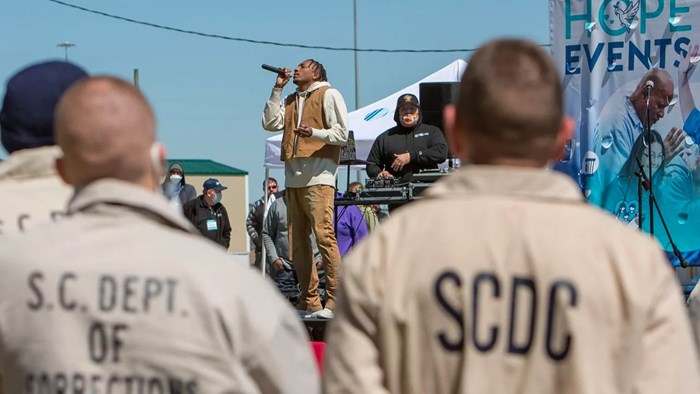 Fifteen months ago, the event would have been almost unremarkable, but since then, COVID-19 restrictions have prevented Lecrae from “hanging out” with prisoners, as he had previously done with less social distance after a performance hosted by Prison Fellowship.

“We sometimes do it outside the security fence line and maintain that separation with the men or women on the inside,” said Prison Fellowship President James Ackerman, describing a “Hope Event” the ministry held at a correctional facility in Alabama in September.

Lecrae’s visit this month was a sign that some prisons have begun permitting more in-person religious activities.

“As conditions have improved state by state, some correctional facilities and prisons are opening back up for visitors and ministry purposes,” Jim Forbes, communications director of Prison Fellowship, said in a statement to Religion News Service.

That comes as Prison Fellowship—the largest US nonprofit serving incarcerated people, formerly incarcerated people and their families—celebrates Second Chance Month, aimed at raising awareness of the difficulties faced by people with a criminal record.

The virus has spread through correctional facilities, where social distancing is often not an option, infecting prisoners at a rate three times that of Americans outside prison walls, according to a recent report by The New York Times.

Over the past year, nearly all state-run facilities temporarily have halted outside visitors to help slow that spread, according to Prison Fellowship’s website.

But as vaccines become more widely available and states begin to loosen those restrictions, high-profile Christians like Lecrae, Justin Bieber, and Churchome pastor Judah Smith have been among the first to resume their visits.

“By focusing on prevention, reentry, and social support, rather than incarceration, we can ensure that America is a land of second chances and opportunity for all people,” Biden’s declaration reads.

Prison Fellowship is celebrating with a number of virtual events, including a prayer service last Saturday and a rebroadcast the following day of its Second Chance Sunday worship service featuring music by musicians from the New York megachurch Hillsong East Coast and a sermon by Pastor Jon Kelly of Chicago West Bible Church. It has also created resources to help churches across the country host their own Second Chance services.

Lecrae is joining the organization for a number of events. Among them is a virtual gala on April 29, where Bryan Stevenson, founder of the Equal Justice Initiative and author of Just Mercy, also is scheduled to speak.

Lecrae, whose father, he has said, was in and out of jail, first got involved with Prison Fellowship in 2019 and has performed at several prisons since then, including the April 2 event in South Carolina.

In a recent interview with Religion News Service, Lecrae said, “Knowing that they’re still human, knowing that they have dignity, worth, that God made them, fearlessly and wonderfully made them” drew him to prison ministry.

Bieber, whose latest album is titled “Justice,” reportedly stopped by a California prison in late March at the invitation of the Anti-Recidivism Coalition, in the company of his wife, Hailey Baldwin, and Smith. While there, they reportedly spoke with members of the Urban Ministry Institute, a prison seminary program, and Bieber announced that he plans to charter buses so inmates’ family members who have been kept away by COVID-19 could come to visit them.

“It was a life-changing experience that I will never forget,” the pop star said in a statement to ABC News Radio. “It was such an honor listening to their stories and seeing how strong their faith is.”

Evangelical Christians took up prison reform as a cause in the past few decades under the influence of Charles Colson, a former aide to President Nixon, who came to faith while serving seven months in Alabama’s Maxwell Prison for Watergate-related crimes.

Colson founded Prison Fellowship in 1976, and the organization has worked with every administration since President Jimmy Carter. It played an instrumental role in crafting the First Step Act, legislation passed in 2018 that focused on reducing recidivism, the number of people who leave prison only to land back in confinement.

Prisons Reopen to Ministry with Recent Visits from ...