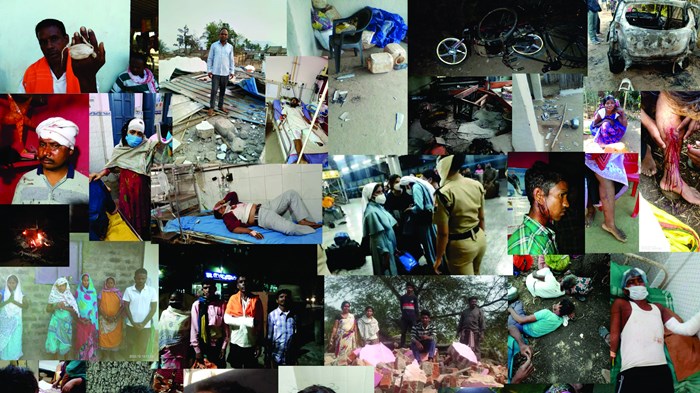 Image: EFI Religious Liberty Commission
A compilation of documented religious freedom violations against Indian Christians over the past six months.

Christians in India are seeking to square conflicting research on communal tensions in their country.

About 100 Christian leaders from across the subcontinent attended an online consultation last month hosted by the Evangelical Fellowship of India (EFI) to discuss the findings and ramifications of a recent landmark report by the Pew Research Center, entitled “Religion in India: Tolerance and Segregation.”

A panel of seven leaders convened by EFI, which represents 65,000 churches and hundreds of Christian organizations across India, discussed the strengths and weaknesses of the report’s methodology and engaged attendees in Q&A on Pew’s findings on tolerance, segregation, religious beliefs, identity, nationalism, and more. Indian Christian sources previously told CT the report offered quantitative validation of their lived experience.

While the report surveyed about 30,000 Indians nationwide across six faiths and 17 languages, including about 1,000 Christians, the EFI panel wished the sample size had been even larger—given their nation’s 1.38 billion people and its size and diversity—and thus better able to examine regional differences in complex issues.

Their biggest area of disagreement: the level of communal tensions between India’s majority Hindus and its Christians, Muslims, and other religious minorities.

Pew found 9 in 10 Indian adults say they feel very free to practice their religion, while 8 in 10 say respecting other religions is very important to their own faith as well as to being truly Indian. Yet Pew also found a fair amount of support for religious segregation. For example, a third of Hindus in India would not be willing to accept a Christian as a neighbor, and neither would a quarter of Indian Muslims or Sikhs.

“Indians, then, simultaneously express enthusiasm for religious tolerance and a consistent preference for keeping their religious communities in segregated spheres,” wrote Pew researchers. “They live together separately.”

“It was generally agreed that the [Pew] report, although unsurprising in some respects, does not adequately reflect the ground reality in India—particularly the narrative of hate and polarization,” said Vijayesh Lal, EFI’s general secretary and a panelist during the consultation.

As CT previously noted, tensions over increasing Hindu nationalism in India have caused the nation to climb the ranks of persecution watchdogs in recent years. Open Doors ranks India at No. 10 on its 2021 World Watch List of the 50 countries where it’s hardest to be a Christian. The US Commission on International Religious Freedom recommends India be added to the State Department’s list of Countries of Particular Concern. Pew itself calculates that India has the highest level of social hostilities regarding religion among the world’s 25 most-populous countries, as well as one of the higher levels of government restrictions.

Pew found that only 1 in 10 Indian Christians reported being discriminated against in the past 12 months because of their faith. Yet this ranged regionally from 19 percent of Christians in the East and 12 percent in the Northeast to 6 percent in the South. (Pew could not break out Christian responses regionally in the North, Central, or West due to sample sizes.)

Days after EFI’s panel assessed the Pew report, its Religious Liberty Commission (RLC) released its latest report on hate and violence against Christians in India, concluding the number of incidents targeting Christians in the first six months of 2021 has increased compared to the same time period last year—even despite a brutal second wave of COVID-19.

The commission recorded 145 incidents targeting Christians from January to June 2021. Researchers stated the violence “was vicious, widespread, and ranged from murder to attacks on church, false cases, police immunity and connivance, and the now normalized social exclusion or boycott which is becoming viral.”

The analysis documents three murders, 22 cases of physical violence, 22 instances of attacks on churches or places of worship or their vandalization, and 20 cases of ostracizing or social boycotting in rural areas of families which had refused to renege on their Christian faith and had stood up to mobs and political leaders from the local majority community.

“The most alarming development has been the expansion and scope of the notorious Freedom of Religion Acts, which are popularly known as the anti-conversion laws, earlier enforced in 7 states, to more states ruled by the Bharatiya Janata Party,” stated RLC researchers. “Once targeting only Christians, they are now armed also against Muslims in the guise of curbing ‘Love Jihad.’ This is an Islamophobic term coined some years ago to demonize marriages between Muslim men and non-Muslim women, particularly those belonging to the Hindu upper castes.

“The laws ostensibly punish forced or fraudulent religious conversions,” the researchers stated. “But in practice, they are used to criminalize all conversions, especially in non-urban settings.”

For example, a mob of religious extremists forcefully barged into a church and assaulted 25 Christians, including women worshipers, on February 7 in the Alirajpur district of Madhya Pradesh, according to the report. The attackers also lodged a complaint against the Christians at the Udaygarh police station alleging conversions. This resulted in the police detaining and interrogating the two dozen Christians and filing charges against their pastor Dilip Vasunia under the state’s Freedom of Religion ordinance. The pastor was imprisoned and finally made bail after a few days, while no action was taken against the attackers who assaulted the Christians.

The report also narrates how on June 28, police in Uttar Pradesh arrested pastor Shivkumar Verma and another Christian on trumped up charges of religious conversions. Local sources alleged that since there was no evidence corroborating the accusations, police demanded bribes to release the two Christians. Verma spent a month in prison before finally being released at the end of July.

The EFI commission made it clear that its report is indicative of current events, not an exhaustive tally, and the actual number of sectarian incidents may be much larger.

Madhya Pradesh, the central state of India, and Uttar Pradesh, the most populous state, led the tally of incidents against Christians, followed by Chhattisgarh and Karnataka.

“Violence against Christians by non-state actors in India stems from an environment of targeted hate,” stated researchers. “The translation of the hate into violence is sparked by a sense of impunity generated in India’s administrative apparatus.”

The RLC report offered recommendations to the government of India. Chief among them: enacting a comprehensive national legislation against targeted and communal (sectarian) violence; advising the various state governments to repeal anti-conversion laws that limit religious freedom and are being misused against religious minorities; the enaction of laws to check hate speech and propaganda; and amending paragraph 3 of the Constitution (Scheduled Castes) Order of 1950 to include Christians and Muslims.

“The sad reality is that minorities are targeted, and these incidents occur and despite the pandemic have increased over last year’s figures,” said Lal. “This appears to be in contrast with the Pew report that would like us to believe that tolerance runs high in present-day India. While there are examples of tolerance historically, the dividing of people driven by narrow political interest is real as well and too often makes use of religion for polarizing people and carrying out sectarian violence.”

Panelist John Dayal, a Delhi-based Christian political analyst and cofounder and past secretary general of the All India Christian Council, said the report could mislead global thought leaders, the media, and fellow Christians into a “dipstick understanding” of religion in India and miss the “extreme polarization” in recent years.

The EFI panel concluded with recommendations for the Indian church.

The first was for Indian believers to go beyond the segregations of the denominationalism that exists within the church in India, and to examine how a more inclusive Christian spirituality could be developed.

“Failure to do this may destroy our ability to be a witness in the nation,” warned panelist C. B. Samuel, a respected Bible teacher and former executive director of EFICOR (formerly the Evangelical Fellowship of India Commission on Relief).

The divides of regionalism and caste in Indian society exist also within the church, thus a noticeable difference in the response of south Indian Christians vs. their brethren in the north or northeast. “Therefore, a conscious modeling of church which breaks the barriers is very important,” said Samuel.

Both panelists and participants stressed the themes of common humanity and the intentional visibility of good deeds. It was also shared that the church must be intentional about critiquing power issues.

“The report speaks about segregation, but the core issue is the misuse of power that leads to segregation which eventually destroys common humanity and leads to silos,” said panelist Richard Howell, principal at the Caleb Institute of Theology and past general secretary of EFI.

Panelist Ashish Alexander, head of the English department at Sam Higginbottom University of Agriculture, Technology, and Sciences in Allahabad, pointed out that during the survey Christians were asked if Muslims were discriminated against in India and only 16 percent agreed. When Muslims were asked the same about Christians, only 8 percent agreed. Hence, Indian Christians need to be sensitized about Indian Muslims and vice versa, and a bridge needs to be built.

The consultation ended with a call for deeper research into themes both explored in the Pew study and beyond it, such as polarization, hate campaigns against minorities, and Islamophobia in India.

“I also wish that Pew would have dissected Indian Christianity,” said Dayal, “to find out what are our strengths and soft spots.”

“There is a need to devise institutions to bring India’s religious communities onto common platforms to discuss issues and diffuse tensions,” said Lal in summary at the end of the consultation.