Update: The leader of GraceLife Church said he was “not trying to make a point” by gathering for worship as normal during the pandemic.
Kate Shellnutt|February 19, 2021 09:00 AM 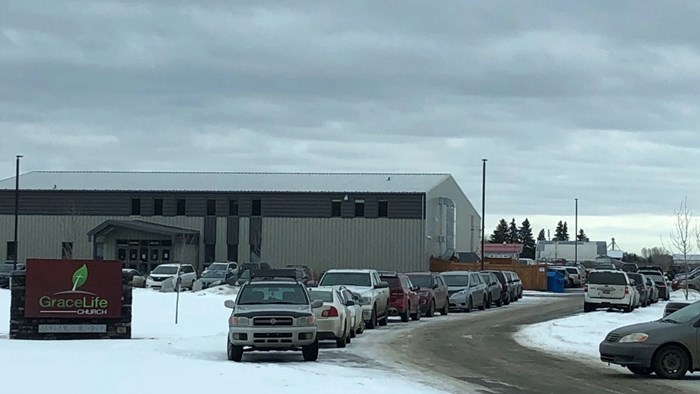 Update (March 23): The Alberta, Canada, pastor who refused to comply with public health orders during the pandemic spent a month in jail before being released on Monday.

James Coates pleaded guilty to breaching bail and was issued a fine of $1,500, with his time spent in prison counting as credit for the fine, CBC News reported.

His congregation, GraceLife Church, has continued to meet for Sunday worship without complying with the province’s restrictions around capacity, masks, and social distancing.

Coates defended his stance before the judge saying, “I’m simply here in obedience to Jesus Christ, and it's my obedience to Christ that has put me at odds with the law. The court is aware that I'm contesting the legitimacy of that law but please, make no mistake ... I’m not trying to make a point. I’m not a political revolutionary.”

The pastor is scheduled to go to trial in May for one remaining charge over violating COVID-19 guidelines on gathering size.

Original post (February 19): A Canadian pastor arrested for violating public health orders remains in police custody after refusing the conditions of his bail: that he stop holding services that defy COVID-19 regulations.

The case of GraceLife Church pastor James Coates has reignited a religious freedom debate over worship gatherings during government lockdowns.

GraceLife Church in Edmonton, after shifting to livestream for the first few months of pandemic, resumed worship over the summer and has met every Sunday “without incident,” it says.

But authorities repeatedly flagged the church for not capping attendance at 15 percent of capacity, requiring masks, or social distancing, as required by health regulations in Alberta.

GraceLife had been fined $1,200 in December, and this month officers found the church again in violation and issued an undertaking requiring Coates to comply. When the church met as usual last Sunday, they called for his arrest. Coates was preaching on Romans 13:1-4, a message titled “Directing the Government to Its Duty.”

Ultimately Coates turned himself in on Tuesday and was arrested on charges of contravening the Public Health Act and refusing the undertaking, the CBC reported. He has twice refused to agree to the conditions of his release, the network said.

The Justice Centre for Constitutional Freedoms, which is representing Coates and Grace Life, said the pastor “could not, in good conscience, agree to” stop holding church services, as ordered.

The commander of the Royal Canadian Mounted Police in the county said in a statement that it has escalated from “education, an opportunity for compliance, and lastly, enforcement” in regards to GraceLife and its objective “is not to interrupt church services, prohibit services, nor deny peoples’ right to practise their religion—merely to ensure that public health restrictions are adhered to while doing so.”

The Canadian Charter of Rights and Freedoms protects freedom of conscience and religion as a fundamental freedom. But it also acknowledges the possibility of “reasonable limits” in the law, “as can be demonstrably justified in a free and democratic society.”

Like John MacArthur and Grace Community Church in California, which resumed in-person worship against state regulations in July, Coates and GraceLife have continued to meet to stand against what they see as unjustifiable regulations on their religious freedoms and, more broadly, civil liberties.

“I’m doing what I’m doing in obedience to Christ. I am quite content to let the Lord Jesus Christ himself decide whether or not this is persecution,” Coates said in his February 14 sermon, according to the Edmonton Journal.

“He promises that those who are persecuted for his namesake will be blessed. He’s the one that blesses, and I’m content to leave that in his court.”

Alberta Premier Jason Kenney issued a statement Thursday, after the Justice Centre petitioned him to revoke the health regulations, which it says “unfairly discriminate” against houses of worship.

“The suggestion that Alberta has any restriction on preaching is completely false. Under Alberta law, no one has been or will be fined or sanctioned for preaching,” Kenney wrote on Facebook. “Anybody in Alberta can preach their faith and, and religious communities are encouraged to gather in congregational worship within the safe guidelines laid out by Alberta Health.”

Kenney described attending Ash Wednesday services this week and applauded “thousands of congregations” in the province who are complying with the public health guidelines.

GraceLife, though, issued a 1,600-word statement suggesting the response to the pandemic has been overblown, and “the negative effects of the government lockdown measures on society far surpass the effects of COVID-19.”

The church’s lawyer, James Kitchen, said, “Their first loyalty is to obey their God, not government. They are committed to gathering, as they always have, for in-person worship services.” The province said it has allowed the church and others to continue to gather according to current public health orders.