Landmark trip will include Qaraqosh, where most families fled ISIS yet some are now trying to restore the Christian heartland of the Nineveh Plains.
Mariam Fam - The Associated Press|February 24, 2021 11:25 PM 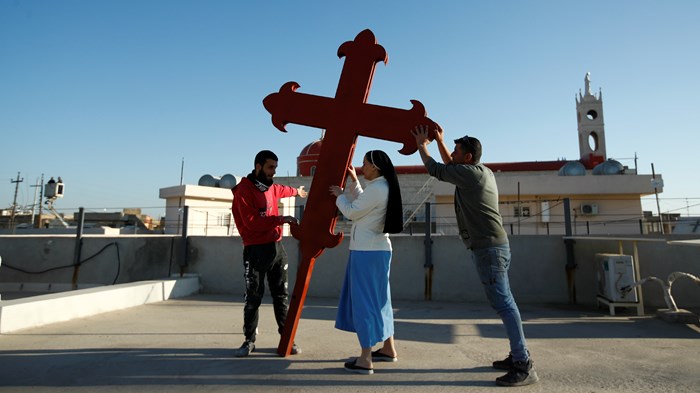 Image: Hadi Mizban / AP Photo
Iraqi Christians place a cross on a church in Qaraqosh on February 22 in advance of Pope Francis' visit to Iraq next month.

Nasser Banyameen speaks about his hometown of Qaraqosh in the historical heartland of Iraqi Christianity with nostalgia. Before Islamic State group fighters swept through the Nineveh Plains in northern Iraq. Before the militants shattered his sense of peace. Before panicked relatives and neighbors fled, some never to return.

Iraq’s Christian communities in the area were dealt a severe blow when they were scattered by the ISIS onslaught in 2014, further shrinking the country’s already dwindling Christian population. Many hope their struggle to endure will get a boost from a historic visit by Pope Francis planned in March.

Among the places on his itinerary is Qaraqosh, where this week Vatican and Iraqi flags fluttered from light poles, some adorned with the pope’s image.

Francis’ visit, his first foreign trip since the coronavirus pandemic and the first ever by a pope to Iraq, is a sign that “You’re not alone,” said Monsignor Segundo Tejado Muñoz, the undersecretary of the Vatican’s development office. “There’s someone who is thinking of you, who is with you. And these signs are so important. So important.”

The ISIS juggernaut and the long war to drive the militants out left ransacked homes and charred or pulverized buildings around the north. But the biggest loss perhaps has been the people. Traditionally Christian towns across the Nineveh Plains virtually emptied out and, by some of the widely varying estimates, fewer than half of the Christians who fled have returned.

The Vatican and the pope have frequently insisted on the need to preserve Iraq’s ancient Christian communities and create the security, economic, and social conditions for those who have left to return. 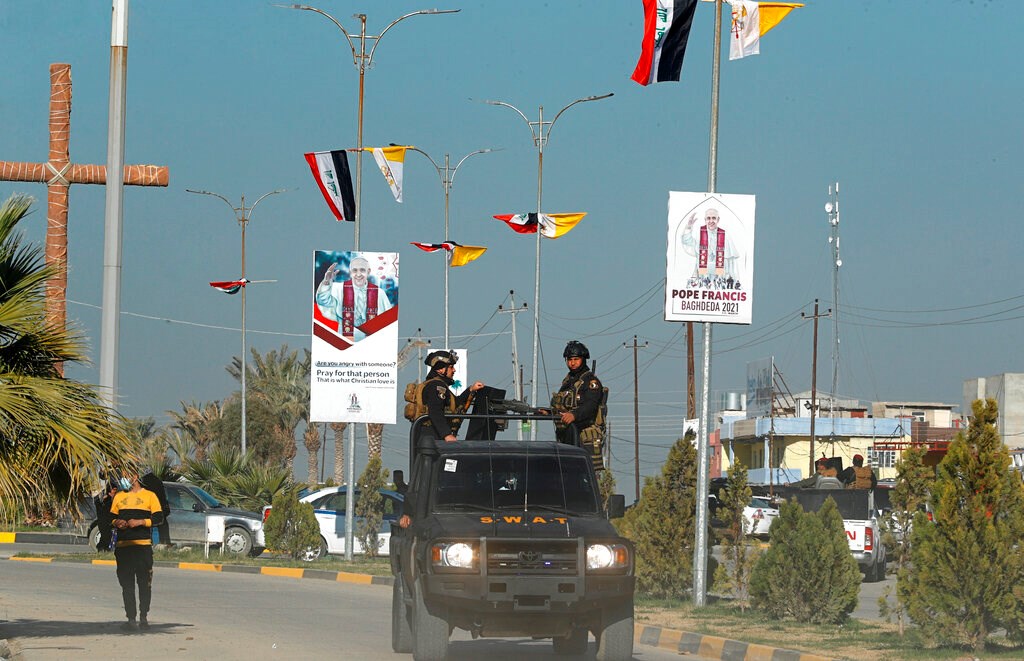 Iraqi security forces in Qaraqosh pass by the flags of Iraq and the Vatican and posters announcing the upcoming visit of Pope Francis on February 22.

To do that, the Vatican for years has helped coordinate a network of Catholic non-governmental organizations providing help in the field in Iraq and other countries, including in education, health care, and reconstruction. The aid is non-denominational—Muslims are helped as well as Christians—and the overall hope is that the delicate interfaith balance can be preserved and strengthened. The pope’s March 5–8 visit will also have a strong interfaith component.

“People want to look for a better future for their families, so you can’t stop them if they have the intention of going somewhere else,” Tejado said. “But at least we try to create the conditions they might return.”

That could be difficult.

Many Christians who fled the ISIS advance have either stayed in Iraq’s Kurdistan region or started new lives abroad. While those who have returned have been rebuilding fractured but vibrant communities with resolve, some still feel vulnerable and eye better lives elsewhere.

Banyameen returned in 2019 from the Kurdish region to his house in Qaraqosh, also known as Bakhdida. But many family members who fled like him ended up in Australia and Germany. ISIS sleeper cells still carry out attacks in parts of Iraq, so he worries about the specter of a militant resurgence, the future of his three children, and Iraq’s economic and security woes.

“The homeland is the family, not the house … I feel very homesick,” he said. “When something is broken, it doesn’t go back to the way it used to be.”

Their home has been repaired, but the sight of empty or damaged ones on their street reminds his wife, Ban Saeed, of the ISIS reign of terror. After she gave birth to the couple’s third child in December, she wondered if it would have been better for their daughter to have been born abroad.

“If we left, I am sure their future would be better abroad, not like here,” she said. “There would be safety and I wouldn’t be scared for them when they come and go.” 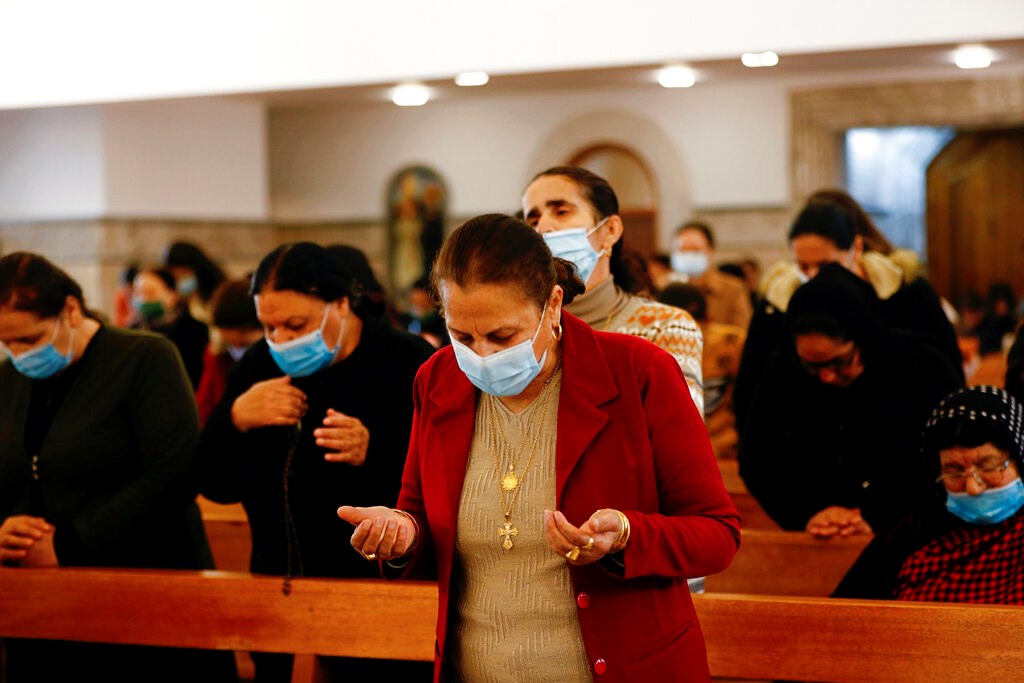 Iraqi Christians attend a mass in a church in Qaraqosh, Iraq, on February 22.

In nearby Bartella, Sargon Issa said he felt the town’s spirit dim with so many familiar faces gone.

“Walking down a street, I used to salute so many people, friends, and neighbors. Now, there’s hardly any of that,” said Issa. “Life is not like before. There’s no flavor to it. … Even those Christians who have returned to Bartella say they want to leave to find stability.”

He, too, would like to leave if he could; his mother tells him she wants to die in Iraq.

“I try to change her mind and tell her, ‘Let’s travel and live without worry or fear … somewhere where we wouldn’t be driven out of our homes,’” he said. “She tells me we should stay, and that God is with us.”

The numerical decline and waning clout of Iraqi Christians started before the Islamic State’s persecution of religious minorities like theirs. Christians were among groups targeted by militants amid the breakdown in security after the 2003 US-led invasion that overthrew Saddam Hussein.

The Chaldean Catholic Patriarch, Cardinal Louis Raphael Sako, estimated that 1 million Christians have left Iraq since 2003 and about 500,000 remained. But there are no official figures, and estimates vary: Some put the number left at fewer than 250,000.

Without faith the government can provide security from potential violence, legal protections, and economic opportunities, many Christians are wary of returning.

William Warda, co-founder of Hammurabi Human Rights Organization in Baghdad, said the Christian presence is under threat. “To this day, they don’t feel safe and secure … because the state is weak, and the rule of law is weak.”

Some Christians lament broken trust with some Muslims in neighboring villages who they believe sympathized with ISIS or helped pillage their homes. They are also wary of the ascension of largely Shiite militias and fearful of what they say are unfavorable demographic changes in some traditionally Christian areas. 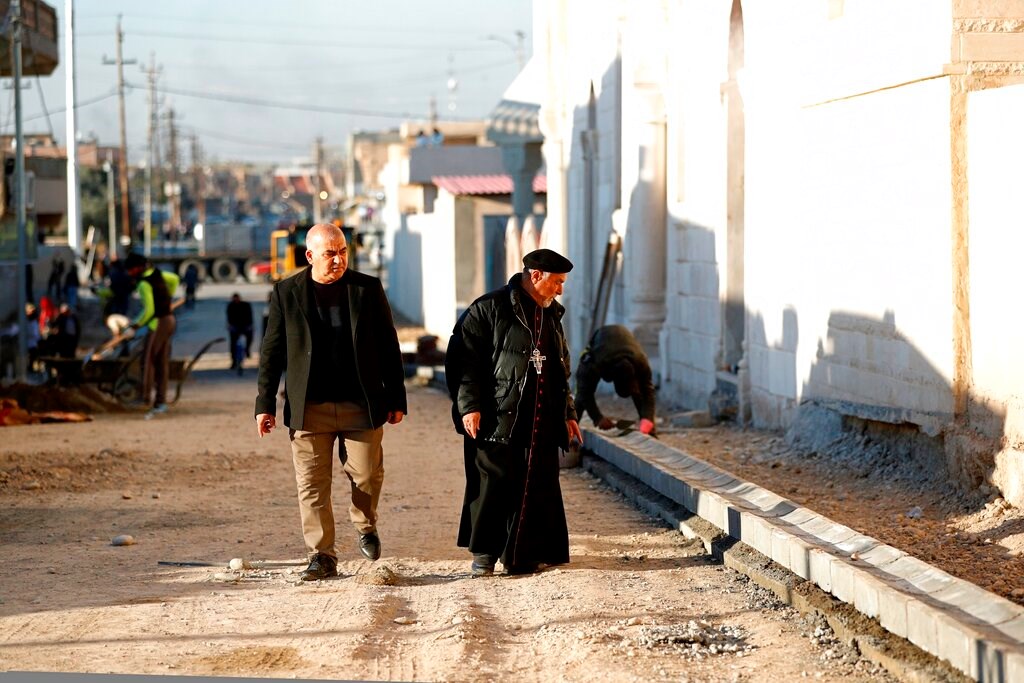 A priest watches workers fix a street destroyed during clashes against Islamic State militants in Qaraqosh, Iraq, on February 23.

Etched in the minds of many are the memories of the flight to escape ISIS, the indignities of displacement, and the scenes of devastation that awaited those who returned, including burnt out churches and desecrated tombs.

As he left under cover of darkness shortly before the militants entered his town of Karamlis in 2014, Thabet Habeb felt pain for all that he was leaving behind. The priest took little besides some manuscripts, including a Bible.

“It was as if we had been expelled forever from the lands of our grandfathers.”

More than two years would pass before Habeb could set foot in the town. The smell of smoke from burnt out structures still hung in the air. In November 2016, he held prayers at the St. Adday church, the sound of broken glass crunching beneath the feet of worshipers stunned by the damage around them. Decapitated statues of Jesus and Virgin Mary stood in the scarred church that day; one woman wept bitterly.

Much reconstruction has taken place since. But so far, only about 345 of about 820 Christian families in pre-2014 Karamlis have returned, Habeb said.

“We need to restore our numbers to support the Christian presence and identity in the town,” he said. 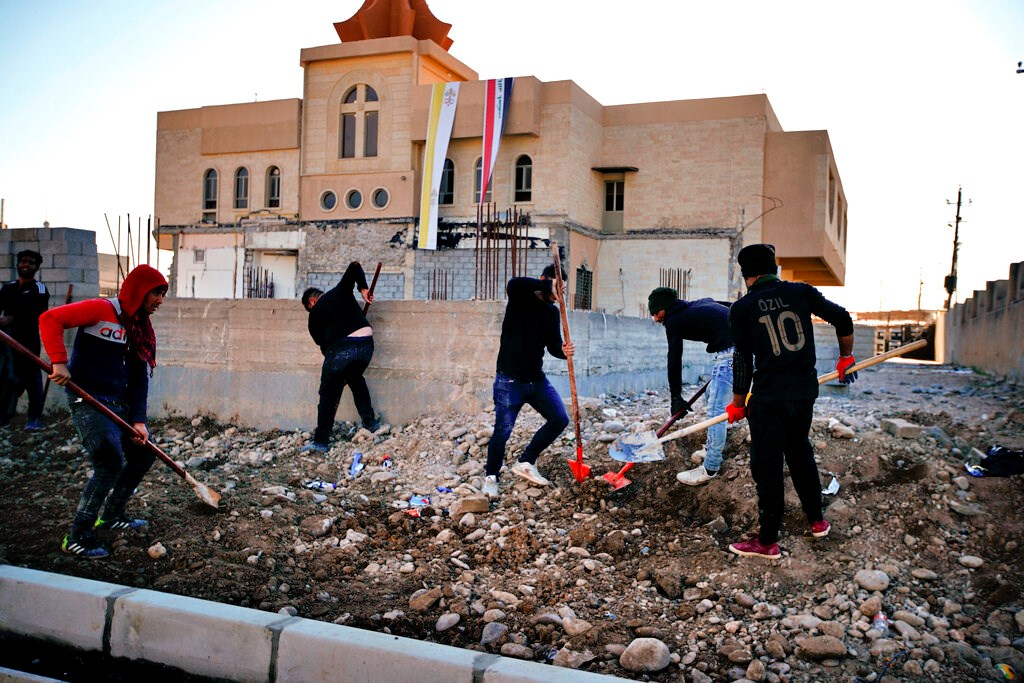 People fix a street destroyed during clashes against Islamic State militants in Qaraqosh, Iraq, on February 23.

Those who did come back make sure an ancient heritage and a way of life endure.

At St. Paul’s House for Church Services in Qaraqosh, religious paintings and musical instruments were burned and a statue of Jesus hurled to the ground, said Duraid Barber, the former manager.

But the house’s activities, which include religious classes and teaching the Syriac language, have been revived and even expanded.

“We decided to return and serve this wounded and pained country to the last drop of our blood,” said the priest. “As Christians, we believe that we are like the salt that adds flavor to food.”