Adam Kinzinger wants to see a commitment to truth reorient his party and recover the witness of the American church.
Kate Shellnutt|January 29, 2021 12:00 PM 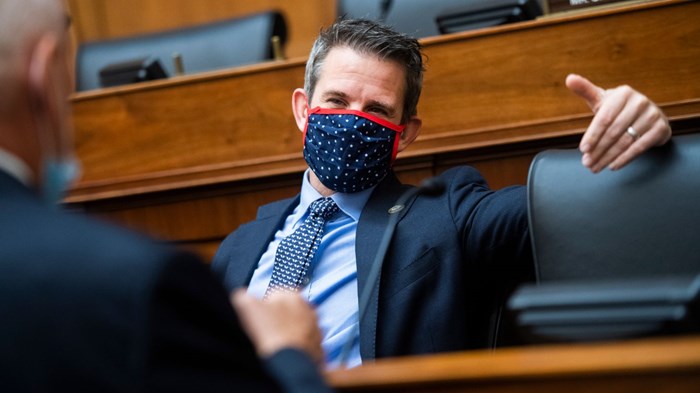 From his office in the Capitol, US Rep. Adam Kinzinger could see a little bit of the crowd on the lawn on January 6. He heard the flash-bangs go off on the steps as rioters made their way inside. And he could feel the spiritual weight of what was unfolding.

“I’m not one of these people that senses evil all the time or anything. It’s probably only happened maybe twice in my life,” the Illinois congressman said. “But I just felt a real darkness over this place, like a real evil.”

Kinzinger, a nondenominational Protestant, doesn’t talk much about his faith in public and is wary of conflating the mission of the church with the work of politics. But he saw serious implications for both in the wake of the Capitol breach and felt convicted to speak out.

“Although I’m not great at citing verse and chapter, I know the Bible speaks quite a bit about conspiracies and about allowing that darkness into your heart, about the importance of truth, the importance of being a light in dark places, of being truth,” he said on a call with CT and other news outlets this week.

“I’m not a Christian leader. I’m not a pastor. But I am a person who shares the faith and who looks at what that’s done to the political system in this country, and I decided to speak out.”

In the days after the attack, Kinzinger called on Christian leaders “to lead the flock back into the truth.” He opposed President Donald Trump for continuing to tout claims that the election had been stolen and was one of ten House Republicans who voted in favor of impeachment.

The backlash was swift, coming from Kinzinger’s district in northern Illinois, where a majority of Republicans disagreed, and from his fellow believers, with many white evangelicals continuing to support Trump even as his false claims encouraged rioters at the Capitol.

Franklin Graham condemned Kinzinger and the other Republicans who voted for impeachment for turning their back on the president despite the good he had done on issues like abortion, foreign affairs, and religious freedom. “It makes you wonder what the thirty pieces of silver were that Speaker Pelosi promised for this betrayal,” the evangelist remarked.

A relative sent the congressman a certified letter accusing him of “doing the Devil’s work.”

Kinzinger said that despite the opposition, the stance was the easiest of his career. Political analysts say it will likely cost him politically, though, and will at minimum isolate him from his party ahead of the impeachment trial set to begin the week of February 8.

At 42, Kinzinger has served in Congress for a decade and has been part of the church all his life; he was raised Baptist and now attends Village Christian Church in Minooka, Illinois. He has a conservative voting record and is outspoken in his stance against abortion, recently urging congressional leaders to preserve the Hyde Amendment, which bars the use of federal funds to pay for abortions.

But unlike most Republicans in Congress, Kinzinger has been openly critical about conspiracies spreading baseless claims that the election was stolen from Trump.

Last year, before Marjorie Taylor Greene controversially became the first open QAnon adherent elected to the US House, he said the conspiracy was a “fabrication” and had “no place in Congress.” Prior to the election being called for Joe Biden, Kinzinger urged people to stop using “debunked misinformation” to claim fraud and refused to challenge state results without solid evidence in court.

Kinzinger said Christians in Congress may, in good faith, take opposite stances, but he also sees them holding a unique responsibility to consider the spiritual implications of their decisions. He’s calling for fellow Republicans to join him to #RestoreOurGOP and had discussed concerns with friends in the party, such as Jaime Herrera Beutler. The Washington Republican, another churchgoing evangelical, joined him in voting for impeachment. “I’m not choosing sides,” she said. “I’m choosing truth."

Other evangelicals in the party, like Cathy McMorris Rodgers of Washington, voted no on impeachment, saying Trump’s words did not constitute an incitement of violence, but still reckoned with the deeper undercurrents of what happened on January 6. She acknowledged a “complete lack of leadership” and a “crisis of contempt in America” and asked Trump supporters like herself to take responsibility for enabling bullying behavior for the sake of favorable policies.

But Kinzinger said it’s not enough for members of Congress to have these kinds of tough conversations. He wants to see the church take the lead.

While those who have been convinced of QAnon theories and election fraud may represent a minority in the America church, it’s enough to worry Kinzinger about Christians’ regard for absolute truth and more broadly, their commitment to Christ above all.

A Lifeway Research survey conducted in the fall found half of pastors in the US said they frequently hear members of their congregation sharing conspiracy theories. “I think there are scales on their eyes,” said Kinzinger.

He believes the spread of lies among Christians is part of a much more serious battle than political races, citing Ephesians 6:12’s reminder that “we wrestle not against flesh and blood, but against principalities, against powers, against the rulers of the darkness of this world” (KJV). He said too many Christians have been co-opted into prizing political victories over spiritual ones.

“If you think about the Devil’s ultimate trick for Christianity, really, he doesn’t care what the tax rates are. It doesn’t matter. What he cares about is embarrassing the church, and it feels like it’s been successful,” the congressman said. “But I also think this is an opportunity for the church to have a massive rediscovery of what our mission and our role in this world is.”

During his inauguration, Biden referenced Augustine’s line from City of God about a people being defined by their common loves. What he left out was Augustine’s teaching that love must be rightly ordered, with love of God above all, scholar Han-luen Kantzer Komline noted.

Kinzinger lamented what he saw as Americans’ disordered priorities—how they’ve allowed allegiances to the country, the economy, the president, or their political identities to distract from their primary identity as citizens of heaven.

“We get wrapped up on thinking that every little political victory we do, which has an impact on an election, is actually fighting for God and the truth. I think to an extent some of that is true. The Supreme Court now is very conservative. I like that. I think that is good for Christianity,” he said. “But I think we need to go a level above that … and say, What is our role as Christians? Truthfully, it’s to make disciples, to love the Lord your God, and love your neighbor.”

For Kinzinger, his faith offers an eternal perspective on his day-to-day work as a congressman. While he aims to fight for life, truth, and freedom, he believes following Christ trumps any political outcome. Right now, it means he can “accept his fate” among the minority of GOP lawmakers backing impeachment.

In the long-run, the debates over policies or political alliances are “not really going to matter,” he said this week. “But what does matter is what we did with this time on earth, how we talked about the Lord, how we stood up for truth.”

Meet the Republican Congressman Who Says His Faith ...