Longstanding foreign policy tool impacts national economies. But evangelicals from US to Syria and Iran differ on who deserves blame.
Jayson Casper|January 14, 2021 06:00 AM 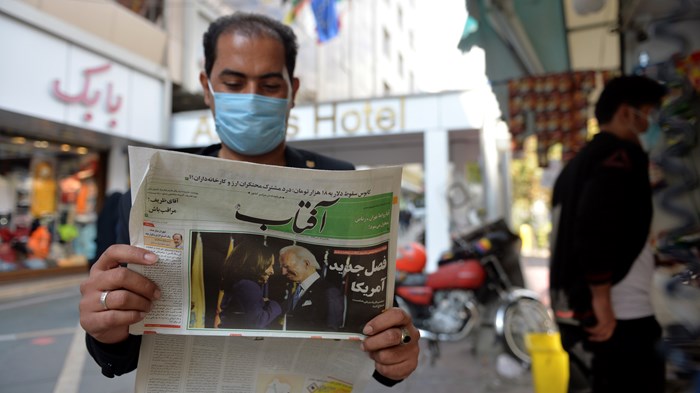 If President-elect Joe Biden makes good on his campaign rhetoric, his sanctions policy will meet the approval of the World Evangelical Alliance (WEA).

Back in April, as even the strongest nations reeled from COVID-19, then-candidate Biden petitioned the Trump administration for sanctions relief on the hardest-hit nations—including Iran and Syria.

“In times of global crisis, America should lead,” he said.

In September, the WEA joined Caritas, the World Council of Churches, and others to similarly petition the United Nations’s Human Rights Council.

“We are deeply concerned about the negative economic, social, and humanitarian consequences of unilateral sanctions,” read their statement, ostensibly singling out the United States and its European allies.

“It is a legal and moral imperative to allow humanitarian aid to reach those in need, without delay or impediment.”

This is “disinformation,” said Johnnie Moore, appointed by President Donald Trump to serve on the independent, bipartisan US Commission on International Religious Freedom (USCIRF).

“Sanctions against countries that imperil their citizens and the world is good policy,” Moore said. “It has proven to be an effective alternative to save lives, alongside diplomatic channels to coerce long-term positive behavior.”

Detailing food, medical, and humanitarian exemptions, the US and European Union (EU) demonstrated that sanctions target regimes and their supporters, not the general population.

Christian Solidarity International, however, cited a Lancet study that found sanctions were among the biggest causes of sufferings in Syria. And it examined the “dense, legalistic detail” in the EU’s explainer, noting that exemptions required negotiation with all 27 member nations.

Representatives of the Syriac Orthodox, Greek Melkite, Armenian evangelical, and Presbyterian churches in Syria have all called for relief.

“Sanctions don’t succeed in overthrowing anti-Western regimes,” said Joseph Kassab, secretary general of the Supreme Council of the Evangelical Community in Syria and Lebanon, citing Saddam Hussein in Iraq and Hugo Chavez in Venezuela, among others.

“These examples prove that sanctions are a joke for regimes, and misery for civilians.”

Fuel costs have increased 50 percent in Syria, he said, and bread lines have formed throughout the country. And testing for COVID-19 is only available in Damascus.

First leveled against Syria in 2011, US sanctions responded to President Bashar al-Assad’s violence against peaceful protests. Four years later, the US associated them with UN resolution 2254, to compel a political transition. There has been little progress toward the stated goal.

Last June, the US increased pressure with the Caesar Act—secondary sanctions against outside parties cooperating with the regime. It paralyzed Syria’s banking and construction sectors.

Confessing the internal roots of the ongoing war, Kassab sees also the manipulation of regional and international powers. There are natural gas and oil interests at stake, amid bids to normalize with Israel. Until the US and Russia work out an agreement, the people are made to suffer.

“Yet with hope, trusting that God is the Lord of heaven and earth.”

Wissam al-Saliby, the Geneva-based advocacy officer for the WEA, took his responsibility seriously. He reached out to both evangelical and secular aid organizations working in Syria, and conferred with Christian ministries working with Iranians.

And he also reviewed WEA history.

“We are not against sanctions as such, in order to put an end to gross violations of human rights, war crimes, and crimes against humanity,” Saliby said, recalling a 2007 statement in favor of unilateral US sanctions on Sudan.

“But how can anyone support these sanctions, when the exemptions are not working?”

Large organizations may be able to decipher the legal steps necessary, he said. But churches and smaller Christian aid groups do not have the resources to do so.

Caritas, a large Catholic charity, led the statement to the UN due to its ministry difficulties. The “chilling effect” of sanctions makes banks unwilling to work with almost any activity in Syria.

Kassab added that even when humanitarian channels are engaged, money is legally transferred at the official rate of exchange, not its true market value. As an example, the funds raised to rebuild the two-story Presbyterian church in Aleppo, destroyed in the war, were only sufficient for the ground floor.

The complications also spill over the border, Saliby said. Foreign banks have refused transfers to Lebanon when told the money will be used by churches in Syria. And resident Syrians involved in church-based refugee work have been denied opening a Lebanese bank account.

Instead of blanket sanctions, many human rights advocates have championed an individual approach. In 2016, the US Congress passed the Global Magnitsky Human Rights Accountability Act, allowing targeted sanctions against violating officials and institutions in order to avoid impact on the general population.

For example, Hong Kong official Carrie Lam, implementer of the security law placing the island democracy deeper under the control of China’s mainland government, is now reduced to cash transactions. She publicly complained how her US status as a “specially designated national” has forced her out of the banking system entirely.

China, Iran, and others “cynically tried to exploit the pandemic,” said Moore. And given that China and Russia have veto power at the UN, he said the WEA makes a mistake to encourage the US to “outsource” its human rights policy to the review of such serial abusers.

“We are not America,” said Saliby. “We are a global body that listens to our constituency all over the world.

“Our role is to see the church be missional—especially in service to the poor and suffering.”

But independent of the WEA, Saliby is also a Lebanese citizen.

Hezbollah, a Shiite militia and political party designated a terrorist entity by the US government, had long been subject to US sanctions. But in November, Magnitsky sanctions were applied to Hezbollah ally Gebran Bassil, head of Lebanon’s largest Christian party.

As a government minister, the US said Bassil steered contracts to favored individuals. But his designation “builds on” previous counterterrorism sanctions.

Alberto Fernandez, president of the US-funded Middle East Broadcasting Networks, lauded the move as it expanded American pressure against more than one entity. Bassil previously played a “double game” with America, seeking support for Lebanon’s Christians while siding politically with Iran-backed Hezbollah.

But others were concerned by American politics.

“When all you have is one arrow, you run into problems,” said Edward Gabriel, president of the American Task Force for Lebanon.

“Sanctions will not scare Hezbollah away. They are part of the Lebanese fabric, and must be dealt with deftly.”

Saliby noted that all Lebanese politicians are understood to be corrupt. But if the US is going to specifically accuse only certain individuals, it plays into the accusations of political interference.

“This seems like an attack on [one Lebanese political alliance]; will there be sanctioning of [the other]?” he said.

“And if you won’t prove it publicly, don’t do it.”

“There is no doubt the sanctions will impact average Iranian citizens negatively,” said Mike Ansari, president of Heart4Iran Ministries. “But many Iranians who contact our TV channel identify poverty as a result of the Iranian regime’s systematic corruption and plundering.”

He expressed “surprise,” however, that some callers welcome the sanctions, hoping it will bring down the government.

So far, Ansari said, the result is to drive Iran further into the embrace of China.

For Hormoz Shariat, president of Iran Alive Ministries, Iranians have nowhere else to go.

President Barack Obama unfroze billions of dollars in Iranian assets to secure a nuclear deal. But that money was spent on corruption and foreign proxies, Shariat said, not on the people. And now that Trump’s renewed sanctions are crippling the government, the US should not let up.

“Life cannot get much worse than it is,” Shariat said. “And if the sanctions are removed, it will only help the government survive, and oppress its people longer.”

But traditional sanctions theory does not hold, he said.

Sanctions do not change regime behavior. They do not drive the people to revolt.

What Shariat hopes for instead is government infighting. As resources dry up, his gut feeling is that the vaunted Revolutionary Guard will overthrow the ruling mullahs—and install a secular system.

“I believe the days of the Islamic government are numbered,” he said. “The change will be sudden, and we Christians must be ready.”

While this may be in line with Trump’s policy goals, Biden’s use of sanctions remains to be seen. The president-elect has many foreign policy concerns—and different constituencies to please.

Will WEA-aligned evangelicals be one of them? Or USCIRF’s Moore?

“My peacemaking friends [in the WEA] ought to have signed on to exactly the opposite statement,” Moore said, expecting Biden will keep existing sanctions in place.

“They should encourage countries to partner together to use sanctions as a tool to avoid war, within the vision of a more just and peaceful world.”

“In any given conflict, we bridge between evangelicals with different views, and it is a privilege to play this role,” he said.

“But what is certain is the grave humanitarian consequences of sanctions, especially in a time of a global pandemic.”

Trump and Biden Disagree on Sanctions. So Do ...