Dozens of leaders from the preacher’s former congregation are calling for him to resign from The Trinity Church, where departing members are raising familiar concerns.
Kate Shellnutt|July 26, 2021 07:00 AM
简体中文繁體中文 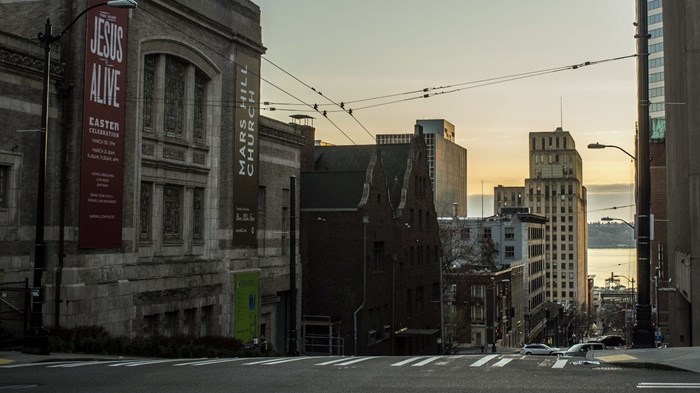 More than 40 elders who served with Mark Driscoll during the final years of Mars Hill Church are publicly calling for him to step down from his current pastoral position and seek reconciliation with those he has hurt.

“We are troubled that he continues to be unrepentant despite the fact that these sins have been previously investigated, verified, and brought to his attention by his fellow Elders, prior to his abrupt resignation” from Mars Hill, they wrote in a statement originally released Monday to CT. “Accordingly, we believe that Mark is presently unfit for serving the church in the office of pastor.”

Driscoll founded The Trinity Church in Scottsdale in 2016, two years after resigning from Mars Hill at the conclusion of an investigation into his leadership. In recent months, several former Mars Hill elders have heard directly from members leaving The Trinity Church over concerns around Driscoll.

The leaders who signed onto the statement say they felt a responsibility to clarify the charges against him as a way to warn current members of his church and continue to call the well-known preacher to the kind of repentance and restoration process he was never able to complete under Mars Hill.

“This letter isn’t new information. It’s just information that hasn’t been widely spread,” said Ryan Welsh, who had been pastor of theology and leadership at Mars Hill. “Our hope is not just to point a finger. Our hope is to protect people and, by the Spirit’s work, that Mark would respond.”

The 41 signatories represent the majority of the pastors who served at the church between 2011 and 2014, when formal charges were raised against Driscoll. The list includes former executive pastor Sutton Turner and former teaching pastor Dave Bruskus, who made up the executive team alongside Driscoll.

Their statement also includes a never-before-released document from October 2014 that details how the church investigation, conducted by members of the elder board at the direction of Mars Hill’s board of overseers, found Driscoll to be quick-tempered, arrogant, and domineering.

The church asked him to repent and seek reconciliation as a result of these patterns of sin and set out a restoration plan. Driscoll resigned before the plan could be implemented.

Some of the findings were shared with Mars Hill members the Sunday after Driscoll resigned, but those gatherings were sparsely attended and the full statement had never been made public. After its founding pastor left, Mars Hill dissolved, with some of its locations becoming independent churches.

Upon leaving, Driscoll mentioned past sin that he had already “confessed and repented of” and said he “had not disqualified [himself] from ministry.” He later described how he and his wife sensed God calling them to leave Mars Hill and referenced opposition wanting him out.

The recommended restoration plan, though, involved returning him to ministry and leadership at Mars Hill. “We hoped to see him restored and are grieved that Mark chose to leave before we were able to walk alongside him through this process,” the elders wrote at the time.

Seven years later, after reaching out to him privately and individually, those elders are again pleading with 50-year-old Driscoll “to participate in and submit to Christian conciliation” and resign from any position of spiritual authority “for the foreseeable future.” Monday’s statement represents the largest-scale effort to call their former pastor to repentence. The signatories recognize the parallels between the allegations made by former Trinity members and the situation at Mars Hill.

“We are saddened to learn that Mark Driscoll has continued in a pattern of sinful actions towards staff members and congregants as he pastors The Trinity Church in Scottsdale, Arizona,” their statement opens. “These sinful leadership behaviors appear similar to what he exhibited in his leadership role at Mars Hill Church in Seattle.”

Several former members of The Trinity Church, including its recently resigned director of security, Chad Freese, have begun to share their experiences online. Their accounts and criticism predate Christianity Today’s recent podcast, The Rise and Fall of Mars Hill, which looks back at the factors around the former church’s growth and collapse under Driscoll.

The outgoing members have raised concerns about the relational health of the Arizona church, citing specific examples of severed relationships in the congregation, including within families. Some of these people, according to Freese, had been barred from church grounds. He also described what he sees as favoritism, distrust, and threats from Driscoll, including threats of legal action.

Last month, the church acknowledged some of the claims made by Freese, referencing an incident report made in children’s ministry. The church wrote in a newsletter that the statements were “categorically false” and considered them “part of an effort to ‘take down Trinity’ and ‘destroy the church.’”

Freese wrote that he had originally come to Trinity “aware of issues at Mars Hill,” but was drawn to Driscoll’s sermons and wanted to see for himself.

Similarly, when the Eneas family joined The Trinity Church last year, they felt like they fit in as fellow transplants from the Pacific Northwest. Every once in a while, Tiffany Eneas said, Driscoll would reference “another church in my past,” but not mention Mars Hill by name. (The church Driscoll led for 18 years also doesn’t come up in his bio on the Trinity site.)

“We were even telling our friends, ‘Don’t google him, just come and see it for yourself,’” she told CT.

Eneas and her family left the church over what she saw as controlling and bullying behavior. She was disturbed by how pastors related to church members, including scrutinizing her relationships with former attendees.

“[My husband] said if he knew, he would have never even driven into the parking lot,” Eneas said. “I don’t feel like people knew … I had such a great experience growing up in the church. I just walked up and trusted.”

She’s grateful for the counsel she received from some former Mars Hill elders who joined an 85-member Facebook group of people who left Driscoll’s congregation in Scottsdale. She estimates that over 100 people in the church she now attends had also left Trinity.

Even with departures and renewed online discussion around Driscoll, the recent tension has not been felt across The Trinity Church. New attendees continue to join the church and appreciate Driscoll as its pastor and preacher.

The former Mars Hill elders acknowledge that they have “no formal authority in this current matter” over Driscoll’s current role, but also raise concerns that the leaders who backed his decision to plant The Trinity Church had not considered the charges he left behind in Seattle.

Earlier this year, The Trinity Church website had listed Texas pastors Robert Morris and Jimmy Evans as well as Christian consultant Randal Taylor as “wise counsel.” Their names no longer appear on the site, nor are any elders listed.

In the latest tax filings for Mark Driscoll Ministries (also called Real Faith), Taylor is also listed as a trustee, alongside Brandon Thomas, who pastors Keystone Church in Keller, Texas, and Josh McPherson, who leads Grace City Church in Wenatchee, Washington. McPherson is a former Acts 29 board member.

“This ‘translocal’ advisory structure has allowed Mark to avoid the accountability he needs,” the former Mars Hill elders wrote. “We hope and pray, by the grace of God, that Mark will submit himself to a prolonged season under the Godly leadership and direction of a local church body and Elder team.”

Editor’s note: This article was updated July 28 as the total number of elders signing onto the public statement rose to 41. The statement listing the 41 elders is available here.