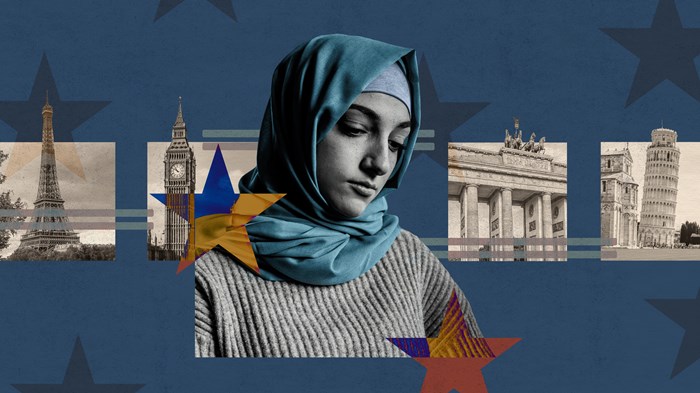 Within three decades, Muslims may comprise 14 percent of Europe.

The face of the historically Christian continent, tallied at 5 percent Muslim in 2016, may dramatically change by 2050 if high migration patterns hold.

And as Muslim families have a birth rate one child higher than the rest of the continent, the Pew Research Center projects nearly 1 in 5 people will be Muslim in the United Kingdom (17%), France (18%), and Germany (20%). Sweden is projected to become 30 percent Muslim.

And Austria, with its 20 percent projection, is on guard. The majority-Catholic nation recently published an online Islam Map, to identify mosques and other centers of politicized religion.

According to European religion experts, however, one-third of European Muslims do not practice their faith.

Could the fear of some European Christians be plausible: an eventual Eurabia?

Or is it Islamophobia to say so?

Or, to the contrary, should Americans look across the ocean and consider French separatism laws and Swiss burqa bans in pursuit of a shared secularism?

For concerned evangelicals, Bert de Ruiter has his own questions—about their own faith.

“If Islam is taking over Europe, is that a problem?” asked the European Evangelical Alliance’s consultant on Muslim-Christian relations. “Will God suddenly be in a panic?”

Muslims will not take over the continent, he believes, noting Pew’s other 2050 Muslim population estimates of 7 percent if “zero” migration and 11 percent if “medium” migration.

But more important is that under any scenario, God will be faithful to his church, says de Ruiter. Once chairman of a Dutch political party, he has a “passion for Muslims, to reach out with the love of Christ.”

Yet too many European Christians, he said, act instead like politicians. Worse, they betray the love of Christ for neighbor.

According to statistics collected in the 2019 European Islamophobia Report (EIR), 37 percent of Europeans have negative views of Muslims, while 29 percent would not feel comfortable working with Muslims. And in Denmark, 28 percent at least partially agreed with the idea that Muslims should be deported.

Farid Hafez, coeditor of the EIR report, said that among the main drivers of Islamophobia is propaganda pushed by far-right networks seeking to create a scapegoat. Amplified by politicians and aided by counterterrorism narratives, perception then creates the reality.

“The more hostility people go through, the more they feel attached to their religious community,” said Hafez, also a lecturer at the university of Salzburg in Austria. “But I don’t see the problem that others do; Muslims are a part of society.”

Labels like “no-go zones” and “parallel societies,” he said, reflect Europe’s inability to adopt an American mentality that accepts multiple identities. And the relationship with Muslims is not fixed but boils down to a collective choice.

“Austria once suffered the siege of Vienna, but it also allied with the Ottoman Empire,” said Hafez. “History provides many options for how to tell your story. So will we choose a narrative of cooperation or conflict?”

In his column for Evangelical Focus, an online news site focused on Europe, de Ruiter said there are many actors trying to shape the narrative.

Among them are majority-Muslim nations such as Turkey and Morocco that build mosques and supply imams. Transnational networks such as the Muslim Brotherhood and Sufi orders compete to gain adherents and to define Islam. Wahhabi preachers on the internet break down traditional lines of authority. And state-linked Muslim councils strive for integration within secular society.

Muslims came to Europe largely as invited migrant labor in the 1950s, following the destruction of World War II. Over time, they brought their families, married, and had children. Initially isolated because of language, increasingly they put their stamp on society, building mosques and opening schools.

A European society that once welcomed them began to grow uncomfortable.

“We invited guest workers,” said de Ruiter, quoting a frequent saying. “But it turned out they were actually people.”

People created in the image of God.

Therefore, the task for Christians, he recently wrote in an analysis for Evangelical Focus, is fourfold:

“As Christians, we must speak up in defense of persecuted Muslims,” said the senior research fellow and professor at the Zwemer Center for Muslim Studies at Columbia International University.

“We must take the initiative through acts of kindness, warmth, and generosity to Muslims, in our midst and around the world.”

A former missionary to Pakistan, Larson said his life was spared when Muslims defended his family against a mob that believed America was conspiring to undermine Islam. Today, he highlights the genocide underway against the Uighur Muslims in China’s northwest Xinjiang province.

But Larson has noticed something curious in his mentorship of Chinese Christians. Many are unaware of the atrocities or, like their government, deny them altogether. Some of it may be fear, he said, as China uses sophisticated technology to surveil its diaspora around the world.

But there may also be a parallel to Islamophobia in Europe and the United States. Chinese Christians from the mainland, he has noticed, speak out in defense of Hong Kong but not Xinjiang.

“One missionary to the Uighurs even said China was only dealing with terrorism,” said Larson. “Is it possible that she, along with most Chinese, fears what the Uighurs might do?”

Citing ethnic violence and acts of terrorism in Xinjiang that began in 2009, the Chinese media campaign against the Uighurs has been relentless. The United Nations has recognized a similar, though not state-run, pattern against Muslims in Europe.

A European Commission Against Racism and Intolerance report found that in the Netherlands, media descriptions most frequently call Dutch people “average,” even “beautiful.” Muslims, however, are predominantly described as “radical” and “terrorist.”

And in Switzerland, a federal commission found that news reports on Muslims focused on their failure to integrate, while only 2 percent of media coverage was of their normal lives and successful examples of integration.

In a statement supporting the UN report on Islamophobia, issued in March, the World Evangelical Alliance praised its Swiss branch for condemning an arson attack on a mosque and contributing financially to its repair. Similar efforts at solidarity were praised in India, Sri Lanka, and the Central African Republic.

“We reaffirm the unique value of each and every member of the human family,” it stated. “We believe each one of us is created in the image of God.”

But of Muslims, said Asma Uddin, there is a different image.

“Many evangelicals view Islam as a satanic deception, fundamentally violent and evil,” said the Muslim author of The Politics of Vulnerability: How to Heal Muslim-Christian Relations in a Post-Christian America. “They then mistake standing up for Muslims as standing up for a religion they despise or distrust.”

Evangelical advocates she has worked with are devoted, she said, but “outliers.”

Nearly 2 in 3 white evangelicals (63%) said Islam encourages violence more than other faiths, according to a 2017 Pew survey. This was the highest level among religious groups.

But the issue is also partisan.

Over half (56%) of Republicans said there was at least a “fair” amount of extremism among US Muslims. Only 22 percent of Democrats said the same.

Since liberals are associated with defending the rights of Muslims, Uddin said, political tribalism leads many conservatives to dismiss the severity of discrimination.

The setting is different in Europe, according to Hafez.

While Muslims in the UK are well represented in academia and politics, they also represent a disproportionate 16 percent of the prison population. Germany continues to have issues integrating its large migrant community.

And France’s vision of secularism separates not just church and state but also religion and society. Combined with a lingering colonial superiority, Hafez ranks the nation as Europe’s worst for Muslim communities.

But Islamophobia, he emphasizes, is not about anti-Muslim cartoons. Neither is it the critique of Islam or the criticism of Muhammad. It is the construction of a scapegoat with a generalized identity, which is then excluded from the rights afforded to all.

Protestants in Europe, he said, often feel it also. In Austria, only since 1861 were they allowed to build a steeple. Today, many of them sympathize when Muslims want a minaret.

And similarly, many are troubled by the publication of the Islam Map.

Michael Chalupka, bishop of the Evangelical Lutheran Church of Austria, said he would not accept this for his own community, joining the calls to take it down.

“When you are weak, you stand by the weak,” said Hafez, a Muslim. “Jesus also stood with the weak, and in Europe, Muslims are among the weakest.”

De Ruiter finds greater solidarity with Muslims on moral issues than he does with the secular Dutch. And he too knows the pain of generalization. Preaching once in Russia, he was queried repeatedly not about his sermon but about Holland’s lax laws on drugs and prostitution.

The state, he told CT, has a biblical obligation to provide security, justice, and human rights. But the believer is to welcome the stranger and love the neighbor. If the Christian values that shaped Europe are taken advantage of, the Christian cannot retreat.

After all, Jesus was crucified.

For this message, de Ruiter is often accused angrily: “Don’t you care to preserve what your grandfathers built?”

But the values they cherish, he said, usually center around materialism, identity, and place in society. If they desire instead to reverse the losses suffered in a post-Christian society, there is a better way than fearmongering of Muslims.

That fight employs the weapons of the world, and must be rejected.

It will lose the gospel, for all.

“If we want things to change, Muslims will have to see something real in us,” said de Ruiter. “But they cannot if we shut the door.”

Editor’s note: This article has been updated to use Pew’s median findings on church attendance and belief in God across 15 Western Europe nations.

Fortress Europe: As Islam Expands, Should the US ...