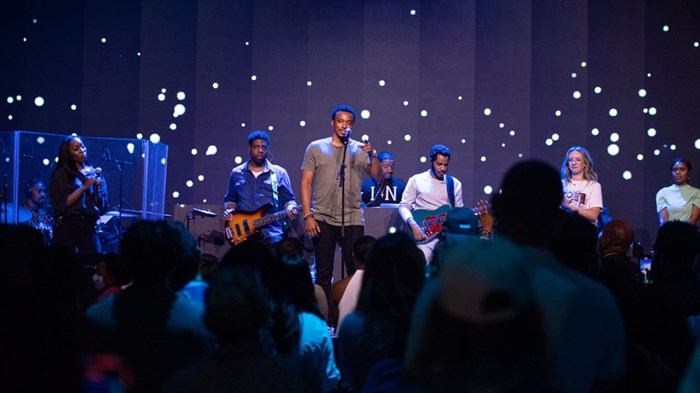 Donning a sweatshirt, jeans, and a man bun, Da’ T.R.U.T.H., who was also featured in Hillsong Atlanta’s “Welcome Home” launch video, rapped the lyrics to his song “The Faith” in front of the congregation at three opening-day gatherings.

Attendees—few were masked, despite the church advertising mask wearing and social distancing requirements—stood from black folding chairs and gold-seated booths to cheer for Sam Collier, who’s the first African American to serve as lead pastor of a Hillsong church.

The crowd was diverse, and the service felt like a pep rally. “I guess I need to know if anyone who loves Jesus is in the building?” Collier asked. “Lift him up! Welcome to our grand opening!”

Hillsong, which formed its own denomination in 2018, has locations in about a dozen US cities and 28 countries, averaging a total global attendance of 150,000 a week, according to its website. The services drew prominent Atlanta figures and celebrities and featured Hillsong Church global senior pastors Brian and Bobbie Houston.

“It’s been a difficult year, but you’re the greatest leaders I’ve ever met,” said Collier, as he introduced the Houstons. He likely was referencing numerous revelations that have rocked the global church starting with the admission of adultery by Carl Lentz, former pastor of Hillsong Church’s New York City location, last November. “We pray against demonic forces, and that [the Houstons] will have victory in Jesus’ name.”

Bernice A. King, CEO of The King Center, was also in the congregation on Sunday to support Collier, whom she called a friend. Atlanta City Council member Michael Julian Bond presented the church with a proclamation.

Most of Hillsong’s existing US locations are in the West or Northeast; the Atlanta church is its first in the South. Last year, Hillsong announced that Collier would copastor the church with his wife, Toni, but she stepped out of the role to write (she has a two-book deal with Thomas Nelson).

On Sunday, the Colliers thanked their relatives as well as their “global family” for support before focusing on their vision for Atlanta. In his message, Sam Collier drew from Exodus 3:7 as he called for revival and racial reconciliation in the “birthplace of civil rights.”

“God is talking to Moses about his own people in captivity. He invites Moses into a solution. He told Moses, I need you to go and free the people. Because of Moses’ sacrifice, he sets the captives free,” Collier said. “God is inviting us into revival where Black and white and political divisions will go away. We’ve been separate for too long, every race, every political affinity. We love the same Jesus and therefore we should be together. We should be unified about being unified especially in the city of MLK. What started in Australia will continue here.”

The church has used worship music including Christian hip hop to build momentum and set the tone for its launch, according to Rapzilla, which is partnering with Hillsong Atlanta. Leading up to its June 6 launch, the church involved artists like Lecrae, Andy Mineo, and Natalie Grant in worship nights that drew 2,200 people in person and 30,000 online, the site reported.

“I like the fact that they’re not straying away from the culture of Atlanta and the culture of hip hop,” said Terran Gilbert. Gilbert, a Christian rapper who performs as T-Ran, came from Nashville with his wife Alexis to support Da’ T.R.U.T.H.

Grammy Award–winning gospel artist Jonathan McReynolds, who is also a judge on the BET gospel music talent show Sunday Best also took the stage, beginning his performance with a riff, singing about turning “an old Atlanta night club into awesome place of worship.” He sang his hit song “Not Lucky, I’m Loved,” which Brian Houston enjoyed as he sang a few notes of the song more than once as he spoke to the room following McReynolds.

Houston joked about his accent (“like Bruce the shark in Finding Nemo”) and described the early days of Hillsong’s founding in the Sydney suburbs back in 1983. He also reflected on his marriage of 44 years to Bobbie. “Vision will hold you together when things try to pull you apart,” he said.

Finally, he encouraged the Atlanta attendees, “You guys are pioneers, and this is the beginning of an amazing journey ahead. Thank you for what you’re about to do here. Pray that the Holy Spirit will move in a fresh way in this city and reach people who have never been reached before.”

More critical voices worry that Hillsong, known for its celebrity adherents and global brand of “hypepriests,” will be another force for gentrification in Atlanta.

Following Lentz’s resignation in New York last November, a string of shakeups have taken place this year. The leaders of Hillsong Dallas stepped down, then a New Jersey pastor resigned over Instagram selfies. The church is reevaluating its policies around abuse.

But Hillsong remains a huge force and a familiar name to evangelicals worldwide. Amanda and Jonathan Carmenate, a Black and Hispanic couple who live in Columbia, South Carolina, were in Atlanta for vacation and decided to attend the first service after seeing a social media post. “We were looking for a church to attend while we are here,” said Amanda. “I liked that it was multiethnic and multigenerational.”

Cheryl Rowland, who lives in Gwinnett County, stood in line to get into the second service. She is familiar with the Colliers’ ministry from when they were based at North Point. “I’m starting a new season in my life and want to expand my base of friends and worship opportunities and experience more of Atlanta,” she said.

The church will continue to meet with two services on Sunday. Its eight-week series “Launch” begins next week.