Devastating deflation means evangelical and Catholic schools can barely pay teachers and keep classes open. Yet it’s cheaper than ever for the global church to support them.
Jayson Casper|June 16, 2021 06:00 AM 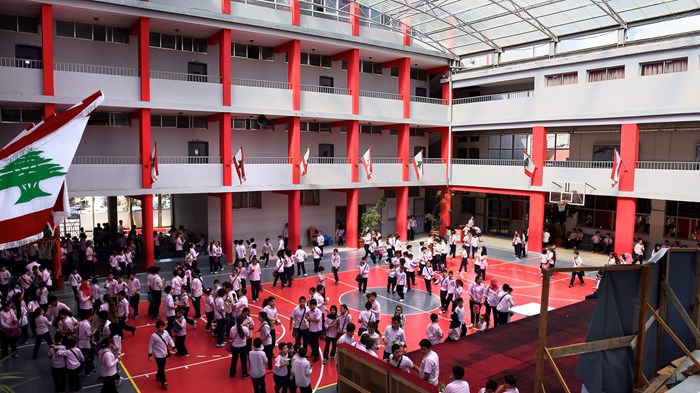 The 2021 graduating class of the National Evangelical School in Nabatieh (NESN) is entirely Shiite Muslim.

While certainly not the image of a typical Christian school in the United States, it is hardly an outlier in Lebanon, where 35 evangelical schools average student bodies that are two-thirds Muslim.

Located 35 miles south of Beirut, Nabatieh originally had a 10 percent Christian population when American Presbyterian missionary Lewis Loe founded the school in 1925. Based in the city’s Christian quarter, NESN drew students from all sects until the civil war drove the once integrated communities apart. From 1978 to 1982, Israeli occupation forced the school to close altogether.

When the city was attacked again during the 2006 war, the school’s bomb shelter gave refuge to frightened children. Relative peace since then has allowed the shelter to become a storage room, but less than 40 Christian families remain in the city. Even so, NESN draws from surrounding villages to maintain a Christian share of 10 percent among its 100-some faculty.

But the new crisis facing Lebanon is financial. Year-end inflation for 2020 was 145 percent, as food prices surged over 400 percent. The World Bank judged the economic collapse to be one of the world’s three worst in the last 150 years.

Teacher salaries have lost nearly 90 percent of their value.

Three years ago, NESN’s 100-foot Christmas tree was Lebanon’s largest. This year—as debt equaled the entire operational budget minus teacher salary—the school could not afford even the Charlie Brown version.

A highlight of the school calendar, Christian elements are welcomed by the local Shiite population—including its substantial number of Hezbollah-affiliated families, said principal Shadi El-Hajjar.

Since he assumed leadership in 2013, the student body of 1,400 has more than doubled.

“We teach compassion, forgiveness, and love of enemies,” Hajjar said, “but as culture and practice, not religion.

“This makes us unique, and draws people to the school.”

Decades of appreciative tolerance—which included a handful of converts to Christianity—turned into tension during the civil war, said Mohamed Abdullah, NESN general supervisor. The sectarian climate pushed Muslim leaders to object to the school’s Christian education, and for four years they forced classes on Islam to be taught instead.

At the war’s end in 1990, then-principal Munzer Anton stood his ground.

“‘If we teach Islam, then we will also teach Christianity,’” Abdullah recalled Anton saying. “So they agreed to stop both.”

Johnny Awwad, executive secretary for education in the National Evangelical Synod of Syria and Lebanon (NESSL), oversees the seven Presbyterian schools in Lebanon. The war forced this change of mentality in most Muslim-majority areas, and Bible classes instead became ethics. It better fits the Lebanese concept of diversity, he said, where no sect seeks to convert the other.

But Awwad’s educational emphasis is to “live Christ” before his neighbor while challenging the Lebanese temptation toward sectarianism and public religiosity.

For example, Muslim schools in Nabatieh require the hijab.

“We want to encourage an alternative society where the other is accepted,” said Awwad. “We have not betrayed our missionary heritage, but transformed it into an oriental context.”

The heritage stretches back to 1835, when the early missionaries established their first school in Beirut. Their focus on female education—unique for the time period—eventually evolved into the now coed Lebanese American University (LAU). And in 1866, this merger of gospel and universal education founded the Syrian Protestant College—now the American University of Beirut (AUB).

Today AUB is thoroughly secular, though LAU maintains a tie to the Presbyterian Church USA and NESSL, which became independent in 1959.

But support comes from the US government, which last year donated $44 million to LAU for student scholarships. And the university appeals for more, having lost $100 million from its endowment.

“Such campuses are where the battle for the hearts and minds of the youth in the Middle East is won, irreversibly and for a lifetime,” said Michel Mawad, president of LAU.

“They represent the greatest return, [and] on a modest investment.”

But whereas the universities have largely separated from the church, said Joseph Kassab, president of the Supreme Council of the Evangelical Community in Syria and Lebanon, the schools have not—and remain an essential part of Christian ministry.

Which is also social, in service of Lebanon.

“Democracy, freedom of speech, and freedom of conscience all come from our faith,” he said. “By keeping gracious presence among Muslims, our values are absorbed little by little.”

And in times of crisis, they saved Lebanese lives. During the Great Famine of 1915, starving villagers could send their children to the evangelical boarding school in Sidon as missionaries rode donkeys to facilitate transport.

“We trust that God has used us,” Kassab said, “and we still have a mission.”

But unlike AUB and LAU, evangelical schools receive little outside assistance. The investment necessary, however, is even more modest. The depreciating Lebanese lira means that a pre-crisis $4,000 USD yearly tuition now only costs about $450 per student—if “fresh dollars” can be found. Last year, Lebanon defaulted on its debt, and a lifetime of savings disappeared in what many now label a Ponzi scheme run by the government.

The appeal for funds is made also by Lebanon’s Catholics.

“Our schools don’t need direct help; they need students to pay the salary of the teachers,” said Raymond Abdo, head of the Carmelite order, “and thus preserve our mission among the poor.”

Located in Lebanon’s north, the Carmelites were forced to close two of their five schools because of financial difficulties. In those that remain open, the teachers continue to serve their 2,500 students, despite accepting a 50 percent salary reduction.

In Tripoli, 95 percent of students belong to the Sunni sect.

“Many Muslim families tell me, ‘Father, we want our children to have your values,’” he said.

“We give them the freedom to raise their children in a Christian setting.”

But in Kobayat and Zgharta, the Carmelites desperately try to keep agricultural families in their historic Christian villages. The pull is to the cities, where education is stronger. Many dream to leave Lebanon altogether.

“We have to strengthen the Christian community,” said Abdo. “But if we don’t get help, we will have to continue closing the schools, one by one.”

Altogether, Catholic institutions provide education for about half of private school students, and a third of all Lebanese. As many as 80 percent of these may shut down, reportedVatican News.

The head of the Association of Evangelical Schools in Lebanon (AESL) said its 35 schools serve 20,000 students. With 700,000 private school students total, the evangelicals serve far beyond their 1 percent share of the Lebanese population.

“We share the good news about Jesus, and how he loves everyone,” said Costa.

“But they will only hear this if we provide a first-class academic education.”

Evangelical schools consistently score in the top 5 percent on national exams, he said. And they pioneer the concept of inclusive education for students with special needs (such as autism), aiding both public and non-Christian schools in implementation.

Yet Beirut Baptist School (BBS) is hemorrhaging teachers amid the economic crisis. Twelve of 164 have resigned, emigrating in search of better opportunities abroad. The Lebanese Evangelical School for Boys and Girls (LESBG) has lost 12 of 200, more than in the past 10 years combined.

Costa suspects at least a 10 percent attrition rate across his association.

BBS and LESBG, however, continue to educate students about the Christian religion. And the parents—more than 80 percent Muslim—are pleased, knowing the school respects all faiths.

Steve White, the principal of LESBG, has adopted the old AUB mantra:

This school is for all conditions and classes of men and women without regard to color, nationality, race or religion … [who may] go out believing in one God, in many gods, or in no God. But it will be impossible for anyone to continue with us long without knowing what we believe to be the truth and our reasons for that belief.

Less than a third of evangelical schools are so deliberate, however. Costa encourages AESL members to hold to their heritage, as the Lebanese respect transparency. And though he is clear that the goal is education—both secular and religious—they do “allow the Holy Spirit to work.”

And in common grace the Spirit does, shaping citizens for Lebanon.

Ali Jaber, a Shiite Muslim graduate of BBS, is a pro bono lawyer with the Beirut Bar Association.

“I went to church and learned all the values,” he said. “It made me different from others who were not raised with the same open spirit.”

But with Lebanon in free fall, can the evangelical school system continue to cultivate such students? Does NESN have a future in Nabatieh?

“If the crisis goes on,” said Hajjar, “we will be in trouble.”

Meanwhile, his boss in the synod looks beyond the balance sheet.

“The good Lord who planted us here will not leave us,” said Awwad.

“We are not an accident of history.”

Lebanon’s Christian Schools Are Full of ...