Survey finds surge in US concern for the global church in need, in run-up to Pope Francis’ visit to Iraq.
Jayson Casper|March 18, 2021 12:12 PM 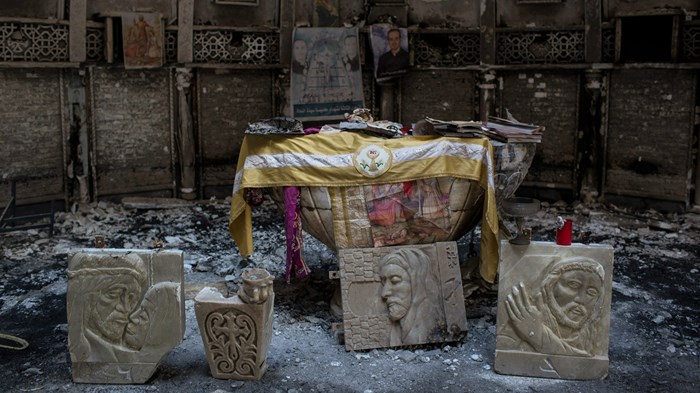 Image: Chris McGrath / Getty Images
Salvaged items placed around the altar of a Qaraqosh church burned and destroyed by ISIS during its occupation of the predominantly Christian town in Iraq, on December 27, 2016.

American Catholics are signaling a dramatic surge in concern about the persecuted church.

And prayer, alone, is no longer good enough, as more say money and arms are needed too.

Asked their opinion about Christian persecution worldwide in the fourth annual survey by Aid to the Church in Need–USA (ACNUSA), 67 percent stated they were “very concerned.”

Similarly, 57 percent stated the level of persecution suffered by Christians is “very severe.”

“Christian persecution around the world is very grave,” he said. “[Catholics] want both their church and their government to step up efforts to do more.”

They have already been praying: 7 in 10 stated prayer is a “very important” initiative to help—the same share as last year, and up from 64 percent in the first survey in 2018. 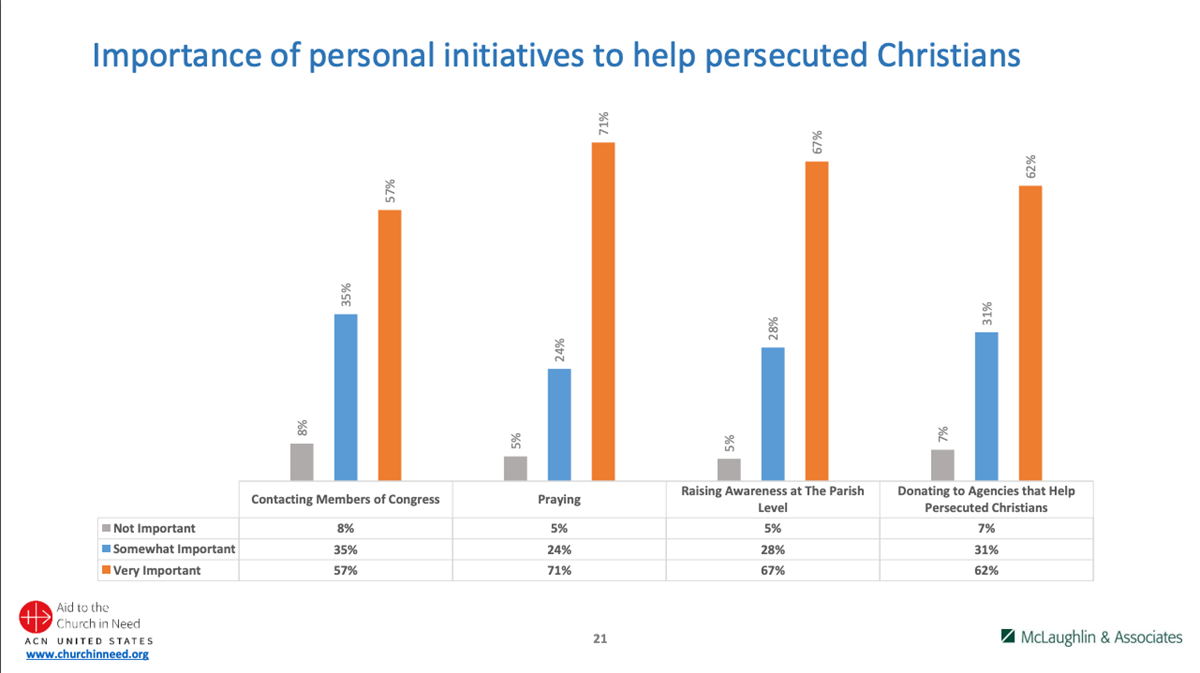 And while about half believe Pope Francis is “very engaged” on the issue of persecution (52%, up from 47%), they believe their local bishop lags behind. Only 3 in 10 (30%) find him “very engaged,” marginally improved from the perception of 27 percent the year before.

The local parish seems to them similarly disconnected, with only 28 percent perceiving it to be “very engaged,” up from 22 percent last year.

It is not enough, per American Catholics: 2 in 3 said raising awareness at the parish level is “very important” (67%, vs. 59% last year).

Other church priorities have fallen a bit behind the persecuted.

The half of Catholics who said it is “very likely” they will give to church aid to the persecuted is matched by the 50 percent who will financially support missionaries. Commitments are lesser, though still strong, to donate toward church buildings (46%), Bible distribution (43%), and the training of priests (44%) and nuns (42%).

But as they desire the church’s concern, American Catholics also increasingly want Washington to help.

Diplomatic pressure on persecuting governments is a “very important” measure for 65 percent of Catholics, up from 55 percent a year ago. Economic sanctions are favored by 62 percent, up from 53 percent. Emergency asylum received 60 percent support, up from 52 percent, while 55 percent want the US to provide financial aid, up from 48 percent.

Militant options also grew in favor: Fifty percent said outside military intervention to protect persecuted Christians was “very important,” up from 46 percent, while 48 percent said the same for the provision of arms and training to communities facing genocide, up from 40 percent last year. 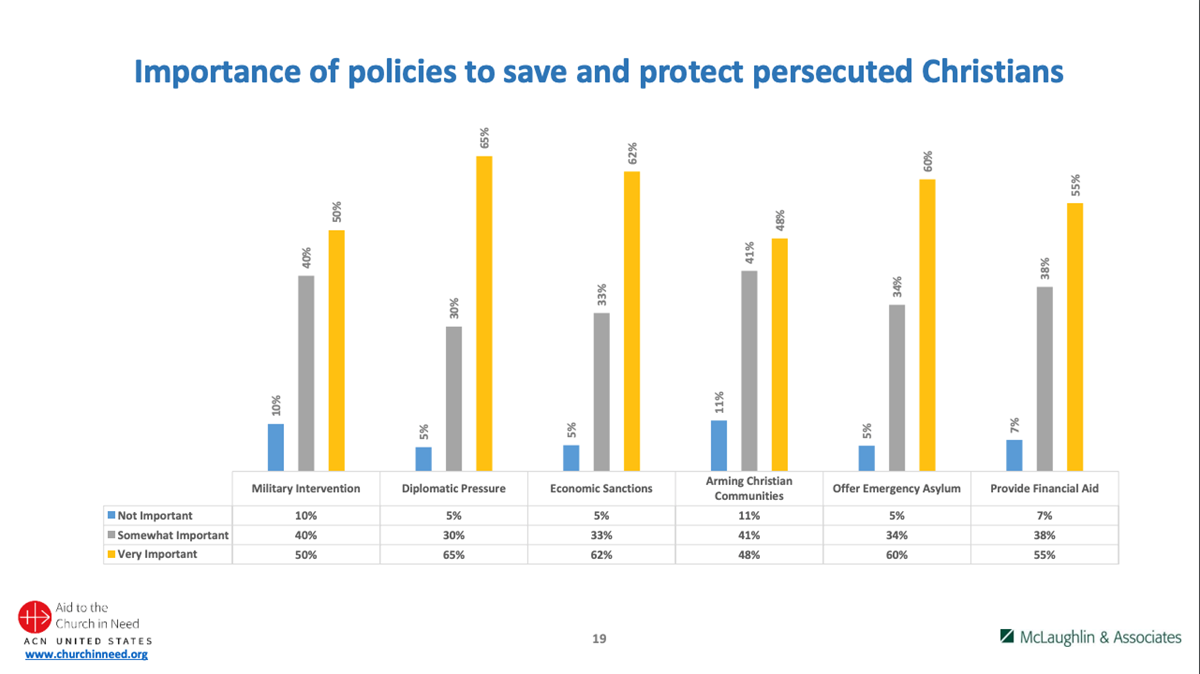 “In the secular media, there is still not enough coverage,” Joop Koopman, ACNUSA director of communications, told CT, speculating on the reason behind the increases from the 2020 survey.

“But in Catholic media, the news is out there, and I believe the effect is cumulative.”

The parish bulletin is the most trusted source of Catholic news, according to the survey, while CNN is most favored for secular news.

So while the ISIS-led persecution of Middle East Christians has faded from immediate memory, Nigeria and India have captured Catholic attention. Also significant, Koopman said, was this month’s visit of Pope Francis to Iraq.

Though the survey took place in February, just before the trip, there was significant media attention on the preparations and highlighting the nation’s declining Christian population.

Overall, American Catholics identified China, North Korea, and Pakistan as the worst persecutors of Christians today. These nations rank No. 17, No. 1, and No. 5, respectively, on Open Doors’ 2021 World Watch List of nations where it is hardest to follow Jesus.

China has received much attention from the Vatican as it negotiates the recognition of bishops in the underground church. A 2018 deal was controversially extended last October, against objections by the United States.

Catholics once represented a substantial portion of North Korean Christians. And Asia Bibi, a Catholic, attracted worldwide attention over her death sentence for blasphemy before being acquitted in 2018 and fleeing Pakistan one year later.

But according to ACNUSA, American Catholics lack awareness of many details:

And less than half (46%) correctly identify Christians as suffering half or more of religiously based attacks around the world. Researchers with Under Caesar’s Sword, a $1 million Templeton Religion Trust study, found that Christians experience 60–80 percent of the world’s religious discrimination. (More of it is experienced by evangelicals than by Catholics.)

Even so, that 9 in 10 American Catholics who find overall Christian persecution at least “somewhat severe” has stayed steady since 2018.

“The poll shows the great need to inform the public regarding specific instances of Christian persecution,” said Marlin. “US bishops and organizations like our own must step up our educational efforts.”

Devotionally, however, the church has been more successful.

Almost half of American Catholics (48%) now label themselves as “very devout,” up from 42 percent last year and 38 percent in 2018. Only 13 percent today say they are “not devout.”

But church attendance has not kept up with the trend. Only 38 percent attend Mass weekly, though that’s an increase from 33 percent last year.

And while the percentage of American Catholics “very concerned” about persecution has dramatically risen, it still falls behind other global issues. 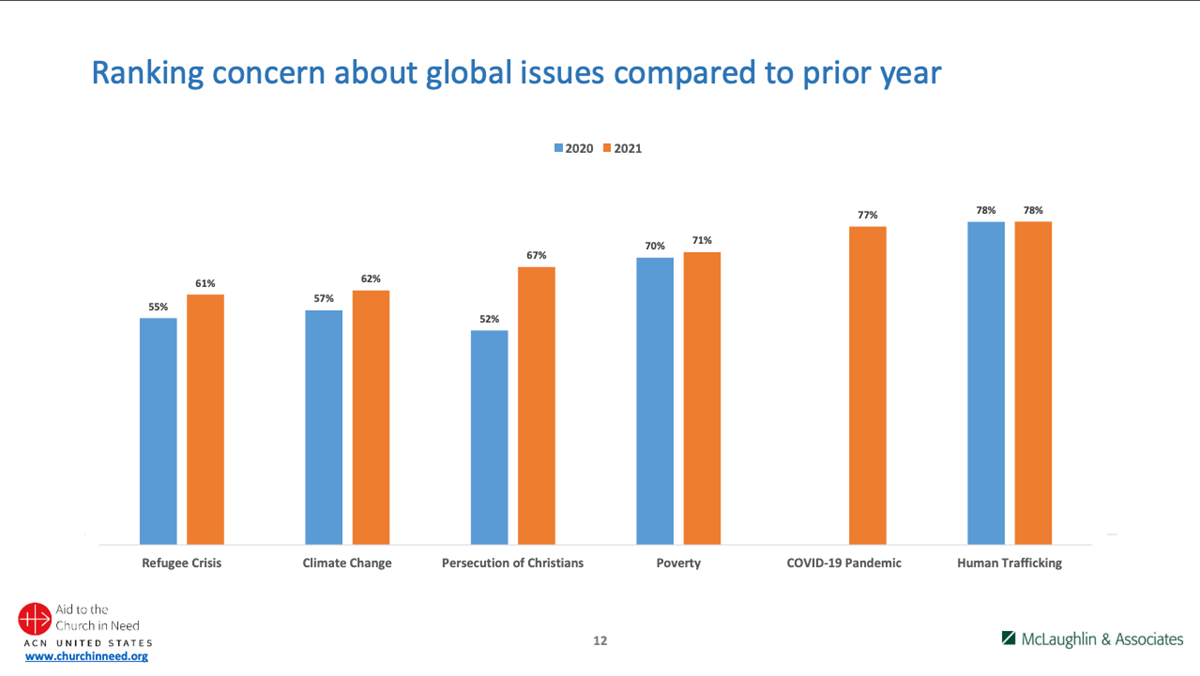 Human trafficking (78%) and poverty (71%) have held steady among top concerns, occupying first and second place in the yearly list. Persecution now ranks third, though concern for climate change (62%) and the refugee crisis (61%) have also risen (from 57% and 55%, respectively).

However, a new question about COVID-19 displaced all but human trafficking, with 77 percent of Catholics “very concerned.”

Across the board, they want more than prayer for the persecuted church.

“It is my hope that leaders around the world embrace the fundamental human right of religious freedom,” said Marlin, “and promote a society that respects ethnic, cultural, and especially religious diversity.”