Coupled with the rise of religious nones, even people of faith are less likely to join a house of worship.
Bob Smietana – Religion News Service|March 29, 2021 07:07 PM 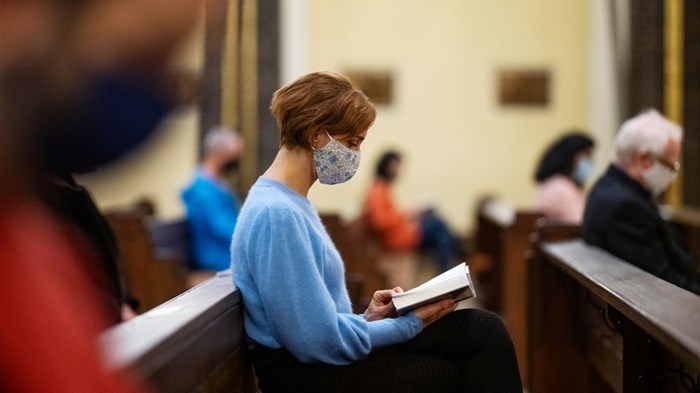 Ask Americans if they believe in God and most will say yes. But a growing number have lost faith in organized religion.

For the first time since the late 1930s, fewer than half of Americans say they belong to a church, synagogue, or mosque, according to a new report from Gallup.

Forty-seven percent of Americans now say they belong to a house of worship, down from 70 percent in the mid-1990s and 50 percent in 2019. The decline is part of a continued drop in membership over the past 20 years, according to Gallup data.

The polling giant has been measuring church membership since 1937 when nearly three-quarters of the population (73%) reported membership in a house of worship.

For much of that time, membership remained at about 70 percent but began to decline after 1999. By the late 2000s, membership had dropped to about 62 percent and has continued to fall. 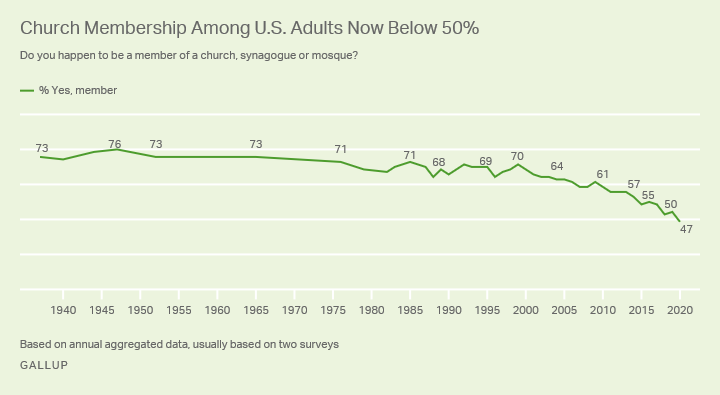 The decline in membership coincides with the rise of the so-called “nones”—those who claim no religious affiliation. Gallup reports about one in five Americans (21%) is a none—making them as large a group as evangelicals or Catholics. Other polls put the number at closer to 30 percent.

Few nones belong to a house of worship, Gallup found.

“As would be expected, Americans without a religious preference are highly unlikely to belong to a church, synagogue or mosque, although a small proportion—4 percent in the 2018–2020 (survey)—say they do,” the report from Gallup states. “That figure is down from 10 percent between 1998 and 2000.”

Gallup also found a decline in membership at churches, synagogues, and mosques among religious Americans, who make up about 76 percent of the population. In the time frame from 1998 to 2000, about three-quarters (73%) of religious Americans were members of a house of worship. That number has fallen to 60 percent. 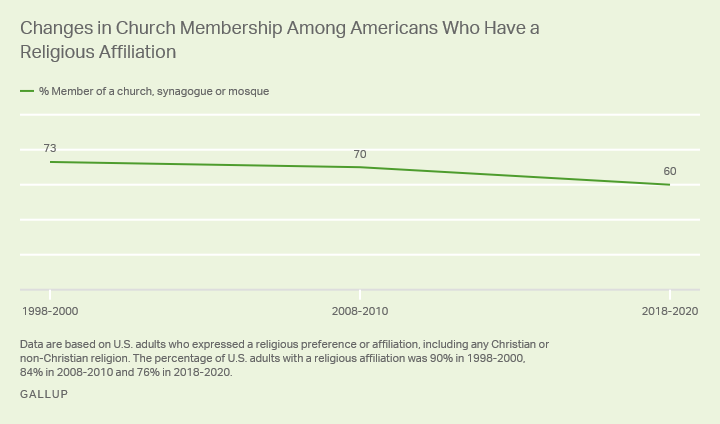 Younger Americans are increasingly disconnected from organized religion, according to the report from Gallup. But the number of older Americans who are members of a house of worship has also declined in recent years.

The gap between those who believe in a specific religion and those who participate in the life of a specific congregation is likely to prove a challenge for houses of worship. And the decline in church membership is likely to continue, according to Gallup.

“Churches are only as strong as their membership and are dependent on their members for financial support and service to keep operating,” said the report. “Because it is unlikely that people who do not have a religious preference will become church members, the challenge for church leaders is to encourage those who do affiliate with a specific faith to become formal, and active, church members.”

Measuring church membership and religious affiliation remains a challenge for researchers. From 1850 to 1950, the US Census Bureau collected data on religious congregations in the United States and from 1906 to 1936 published a “Census of Religious Bodies.”

“The Census of Religious Bodies was conducted every 10 years until 1946,” Pew Research noted in a 2010 article on religion and the Census. “The 1936 Census of Religious Bodies was the last one published, however, because the US Congress failed to appropriate money either to tabulate or to publish the information collected in the 1946 census. By 1956, Congress had discontinued the funding for this census altogether.”

Statisticians from more than 230 religious denominations and other religious bodies also compiled membership statistics for the 2010 US Religion Census: Religious Congregations & Membership Study.

That study, which includes county by county data, found religious organizations claimed just under half (48.7) of the United States population as adherents. Similar reports have been compiled every 10 years since 1980.