To Further Religious Freedom Among Muslims, Can Women Succeed Where Men Have Not? 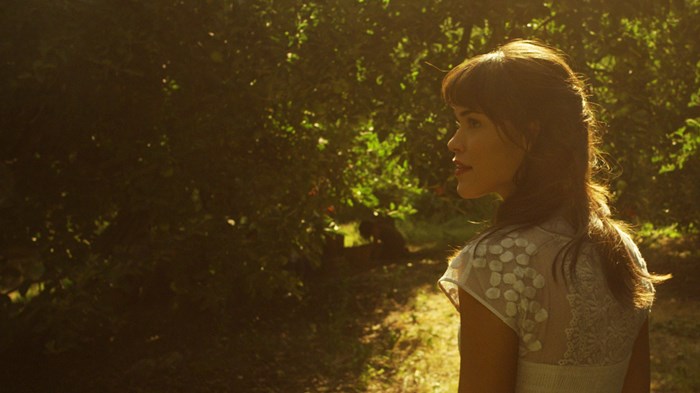 Sitting around a dinner table in a fancy restaurant, Talia is uncomfortably nervous. Her two colleagues in pristine attire anticipate a delicious meal—and then exult in the immaculate but meager portions provided them.

Earlier in the evening, the disappointed Talia had noticed a confused villager with a picnic basket ushered out of the establishment. Later, she peeks outside. Beckoned to join a family gathering, Talia discovers all the delight of nature on offer.

A new world had opened, wide and wild.

The fictional scene is a compelling metaphor for religious freedom.

“The idea was to move people from an awareness of scarcity to a desire for abundance,” said Shirin Taber, director of Empower Women Media (EWM), of the nine-minute Portions, produced by fellow Iranian American Naji Hendrix and Nancy Sawyer Schraeder.

“Short films can shift hearts, and after only a few minutes, rigid opinions begin to thaw.”

The key lies in storytelling, which Taber believes is a better method than the declarations and sanctions that have traditionally been tried to advance religious freedom in the Muslim world.

“Many people are singing to the choir, but few come up with strategies that can actually move the needle,” she said. “And notably, they don’t include women.”

Her own story proves the difference.

Taber’s commitment to religious freedom was developed early. Her Muslim father, raised in pre-revolutionary Iran, permitted both mother and daughter to follow the Christian faith.

“Sharing our personal story is the best way to hook an audience,” said Taber. “After my father passed away, I realized the best gift he ever gave me was religious freedom.”

“Hearts shift,” she says, when she transparently shares her background—without confrontation. EWM works with women of all religious backgrounds, to help them tell their own religious freedom stories.

However, surveys show that her father’s tolerance is in rapid decline around the world. The Pew Research Center’s 2020 report recorded the highest level of government restrictions on religious freedom in 11 years of study. Social hostilities have also climbed steadily.

In both categories, the Middle East and North Africa report the highest levels.

Since 2018, EWM has sponsored a religious freedom film competition to change the narrative. Hosting free coaching and film training sessions multiple times per year, the nonprofit has developed a network of over 600 women, passionate to tell their stories.

But they are not the only ones.

This month, another Pakistani Christian was handed the death penalty.

To ensure this mentality is countered, EWM also offers the Live What You Believe initiative, an hour-long, four-part online course in religious freedom taught, appropriately, through short films.

Over 400 women have enrolled in the training, launched last November. Two-thirds are from the Muslim world, including Pakistan, Iran, Malaysia, and Tunisia.

“Many organizations already do a great job documenting and publicizing the tragic cases of religious discrimination and persecution around the world,” said Mariya Goodbrake, originally from Afghanistan. “Our focus is to draw attention to the many positive benefits of the universal right of freedom of religion, belief, and conscience.”

But if storytelling is one medium, business is another.

RFBF’s analysis of Pew’s data shows a clear correlation between the denial of religious freedom and gender inequality. And similarly, where religious freedom provisions are strongest, indicators of social well-being surge, including gender empowerment and a higher earned income for women.

The US Commission on International Religious Freedom has detailed how many nations place religious limitations—often in the name of sharia law—on their women.

Many in Europe, however, push back against perceived US interpretations of religious freedom, which seem to emphasize distinctly American Christian concerns, said Lisa Winther, senior human rights advisor at Stefanus Alliance. Sometimes the nonreligious are neglected.

“Women’s groups have been particularly skeptical, fearful religious freedom will result in greater control by religious leaders within discriminatory patriarchal systems,” she said. “This is changing, but they want to see a connection to the full spectrum of human rights.”

Instead, Europeans speak of the “freedom of religion and belief” (FoRB).

Taber appreciates Stefanus, which is based in Norway. With over 50 members in the Nordic Ecumenical Network, it launched the FoRB Learning Platform in 2018. Materials are now available in 11 languages, a “smorgasbord of learning resources and opportunities,” said Winther.

It had become unsustainable to travel around the world with translators to promote the issue at sporadic FoRB conferences. So last year, Stefanus launched a trainer-of-trainers online course to multiply advocates at the grassroots level.

Of the 88 people enrolled worldwide, about 40 percent are women. Most participants come from Kenya, Pakistan, and Nepal, with over 100 people on the waiting list.

Under development is a course to highlight how FoRB intersects with women’s rights.

In Lebanon, the Adyan (Arabic for “religions”) Foundation adapted the materials to the Arab world for trainers and media professionals. The interfaith group also produced an Islam-specific study program for imams and women preachers on diversity and peace building. Christian materials speak from a biblical foundation, and all efforts address the importance of human rights and social responsibility.

Engaging through multimedia, the foundation’s 40-minute film, Against the Current, launched a national campaign under the slogan “Fanaticism blinds us; Faith enlightens us.” Its online platform Taadudiya (Arabic for “pluralism”) reaches 20 million unique viewers each year.

But lessons are best learned in community—telling stories.

“Emotion changes people,” said Nayla Tabbara, president of Adyan. “When grievances of communities are recognized, it opens the door for authentic empathy, and sound relations.”

Registered in 2008, Adyan has formed dialogue groups throughout Lebanon. Yet one of its most successful programs involves youth. Over 3,000 students in 42 schools are mentored toward religious coexistence.

But while the concept is embedded in all the foundation’s materials, “religious freedom” is not an emphasized phrase, said Tabbara, a female Muslim theologian. Adyan’s hallmark is “inclusive citizenship.”

Spiritual equality is on the agenda for Muslims for Progressive Values (MPV), though this manifests differently in different contexts.

In the West, a few female-led mosques have begun to emerge. In Africa, the group’s focus is on female education. And in Malaysia, it helped pass a law against marital rape. MPV is registered as an advocacy group with the United Nations, and academic literature increasingly studies the foundations of “liberal” Islam.

Founded in 2007 at Sarah Lawrence College in New York, the group’s advocacy for controversial positions within Islam has run afoul of traditional communities. While progressive Muslim organizations have multiplied around the world, so have the death threats.

MPV has attracted media attention in the US due to its strong support of the Muslim LGBT community. But Ani Zonneveld, MPV president, puts a different issue at the center.

“Religious freedom allows an individual to shine as God created them,” she said. “Gender issues then proceed from this.”

Born in Malaysia, Zonneveld traveled the world with her ambassador father before settling into the American entertainment industry as a closeted Muslim songwriter. The 9/11 attacks awakened in her a desire to serve Islam, but as she began to highlight its progressive heritage through music, she found only rejection.

“I want to express my religion the way I want to, without being shut down or shamed,” Zonneveld said. “But those who join us are few because the pressure against them is intense.”

And religious advocacy is more dangerous than secular.

But MPV’s message is clear: Classical Islamic jurisprudence is wrong, and Muslims are starting to realize it. Even Morocco, Zonneveld highlights, has ruled that apostasy is not a crime.

MPV’s success in appealing to progressive Muslims—intentionally bypassing established institutions through social media, engaging youth with Islamic arguments in their local languages—attracted the attention of Taber, who considers it an expert in reaching the next generation. Zonneveld appreciates EWM’s stance on religious freedom and multifaith collaboration, but calls out other groups for their public “religious liberty” stances against gay marriage and abortion.

“We look for allies and common ground,” Taber said. “But LGBT issues are not one of our sectors. Rather, our focus is on empowering women in the Middle East and North Africa.”

She emphasized, per Pew, that 80 percent of the world now lives with religious freedom restrictions. In getting the message out, success depends on “trusted partners” of any belief or none at all.

“There is simply too much at stake,” Taber said. “Meanwhile, women and minorities suffer the most.”

Still, LGBT issues are a contested area in the Middle East—and elsewhere—but have become part of the increasing intersectionality of women’s advocacy. The UN special rapporteur for FoRB issued a report last year stating that he “firmly rejects” discrimination in issues of gender and gender identity justified by religious belief.

Some women have called for greater nuance in the UN report. Robin Fretwell Wilson, professor of law at the University of Illinois, highlighted how the “Fairness for All” initiative in conservative Utah has protected religious liberty while leading to the second-highest US levels of support for LGBT issues.

Eugenia Pastor, senior research fellow at the Max Planck Institute in Germany, meanwhile, called the UN report “inconsistent” and criticized it for failing to take into consideration the survival of religious institutions.

The World Evangelical Alliance (WEA) echoed this stance, as the UN report noted objections to the appointment of clergy with LGBT bias. In its official response, the WEA said of abortion and gender issues in particular, the state cannot assume a role in “defining the doctrinal positions” of religious groups.

But these are the debates about religious freedom in the West. In the Muslim world, Taber and Zonneveld agree, there is ample room for advocates to cooperate.

Otherwise, more women will meet the reaction of Talia.

In the film, she returns from the picnic, shoeless and soiled, to share the news with her colleagues. But they recoil in rejection, rebuking her now-unprofessional appearance.

As the film fades out, the final scene shows Talia looking longingly toward the light coming through the still-ajar door.

What path will she—and other women in the Muslim world—ultimately choose?

“Millions of Muslims are online everyday looking for answers,” said Taber. “They are ready for religious freedom. We just need to share the message in culturally appropriate ways.”

To Further Religious Freedom Among Muslims, Can Women Succeed Where Men Have Not?

To Further Religious Freedom Among Muslims, Can ...