After George Floyd's death, white and Black congregations partnered to serve the city.
Adam MacInnis|May 24, 2021 06:00 AM 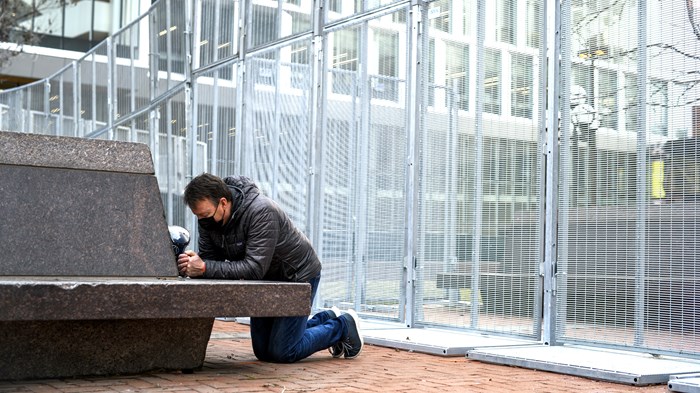 Buffalo Evangelical Free Church wanted to help. About an hour’s drive from downtown Minneapolis, the majority white church was deeply upset by the news of George Floyd’s death and shocked by the videos on social media.

As protests swept the city, the Buffalo, Minnesota, congregation started to ask what it could do. Pastor Greg Braly was eager too, but cautious.

“I think one of the mistakes that Anglo churches can make is to walk in with the white savior hat on and walk in thinking we know what’s going on,” Braly said. “We don’t.”

Instead of showing up with a plan, the church needed to start with a relationship. Braly reached out to another Evangelical Free congregation and connected with the majority Black Riverside Evangelical Free Church, located between the airport and the VA Medical Center.

Braly became friends with Riverside pastor Prince Lee and then found ways for the congregations to connect. Lee spoke at Buffalo, the churches worshiped together, and the white suburban congregation supported the urban Black church with material and financial resources as it ministered in the city.

“We view the Riverside church as a partner and sister church,” Braly said. “They are the experts.”

Similar partnerships have formed across the Twin Cities. White evangelical churches have looked for ways to respond and serve while being more aware than they have in the past that there are better and worse ways to help. When Transform Minnesota, an evangelical organization that brings pastors together to wrestle with social issues, hosted a Zoom call with more than 250 ministers last May, multiple pastors of color repeated this point. If white, suburban churches really wanted to help and to be effective, they needed to listen to Black Christian leaders in the impacted communities.

A year later, the pastors who have tried to respond to that call and forge relationships across racial divides say it hasn’t always been easy. On the one hand, pushing their white congregations to think about racism in their communities can stir up controversy and bad feelings. On the other hand, the pastors worry about saying the wrong thing and offending the Black Christians while trying to reach out.

“Everybody wants you to take a stand, but I’m not always sure what stand to take,” said Kory Kleinsasser, pastor of the predominately white Waite Park Wesleyan Church.

His instinct is to look for nuance. But attempts to emphasize complexities aren’t always welcomed.

“I have to make statements about things that I don’t feel like I fully understand myself,” he said.

Kleinsasser said that’s okay, though, because everything has to be done with an open and humble spirit.

Practically, for the Waite Park Wesleyans, this looks like sweeping broken glass, feeding the hungry, and giving clothes to people who need it—but doing those things because they are asked as they come alongside Black Christians, who are also engaged in this work.

The Wesleyans started a relationship with Wayman African Methodist Episcopal (AME) Church in 2016, after a police officer shot and killed high school teacher Philando Castile during a traffic stop. The white congregation has learned a lot in the years since then, and both the Black and white pastors say the church was more prepared to respond last year because of that preexisting relationship.

“Because we’ve been dealing with race and racial healing, Black and white churches working together to find ways to cooperate, we weren’t caught flatfooted,” said Richard Coleman, leader of the AME congregation.

Conversations about racism were not always comfortable, Coleman said, but he hopes to help Christians in Minneapolis learn “how it affects all of us” and “how it affects the church.”

“We encourage people not to run from it,” Coleman said. “Embrace the truth. Learn why it exists.”

Together, white and Black churches in Minneapolis have accomplished some significant things. One major example of cooperation is The One Fund project. Started in April 2020 to help communities disproportionately impacted by the COVID-19 pandemic, the religious leaders involved decided to make racial justice a fund priority too after Floyd’s death. By May 25, 2021, the anniversary of Floyd’s killing, they expect to have $1 million available in grants for African American ministries in the area.

“We’re bringing a greater force to combat the areas in our communities that are hurt and need attention,” Coleman said.

Race is a fraught topic, and a lot of things hold pastors back when they think about leading their congregations into the public square and speaking on complicated issues, said Matthew St. John, pastor of New Hope Church, another Evangelical Free congregation in greater Minneapolis.

“We are often distracted by our own great failures,” he said.

As New Hope came together with Black Christians, though, and then joined with Black and white congregations from across the city to pray during police officer Derek Chauvin’s trial, they returned repeatedly to key questions: How can we be a gospel witness to the glory of Christ? How can we show unity and proclaim justice in the face of all these complexities?

“The ultimate solution is going to be a gospel solution,” St. John said.

If Christians will press on despite past failures and understand the power of God to reconcile, he believes they can present their city with God’s vision for a unified body of people from every tribe and tongue.

“Nobody has a solution like that,” he said, “except the church.”

With white and Black pastors willing to work with each other more closely than before and churches working to give up their “white savior hat” and put friendship and partnership first, Coleman is hopeful about the future in Minneapolis.

“It doesn’t mean that we’re going to start agreeing about all those things. There may be things we never agree about," he said. “But we can love each other.”

No White Saviors: How Suburban Minneapolis ...