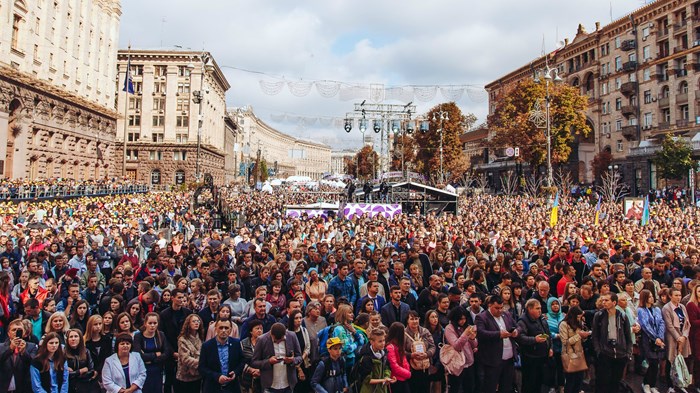 Like many in America, evangelicals in Ukraine feel under siege.

It may be why people are starting to elect them—in record numbers.

“Today, as never before, our nation needs unity, peace, and the authority of God’s Word.”

Their perceived threats are coming from all directions.

From the east, Russia recently amassed 100,000 soldiers on the border.

From the west, the European Union pushes LGBT ideology.

And from within, corruption is rampant.

On each issue, evangelicals align well with Ukrainian voters.

“The shortage of good leaders is so intense, parties are starting to recruit in the churches,” said Unguryan. “Honest and responsible politicians are easiest to find there.”

Last October, more than 500 evangelicals were elected to all levels of government. One even heads a major city—Rivne, in western Ukraine—as mayor.

With evangelicals comprising only 2 percent of Ukraine’s 40 million people, it is a significant achievement. 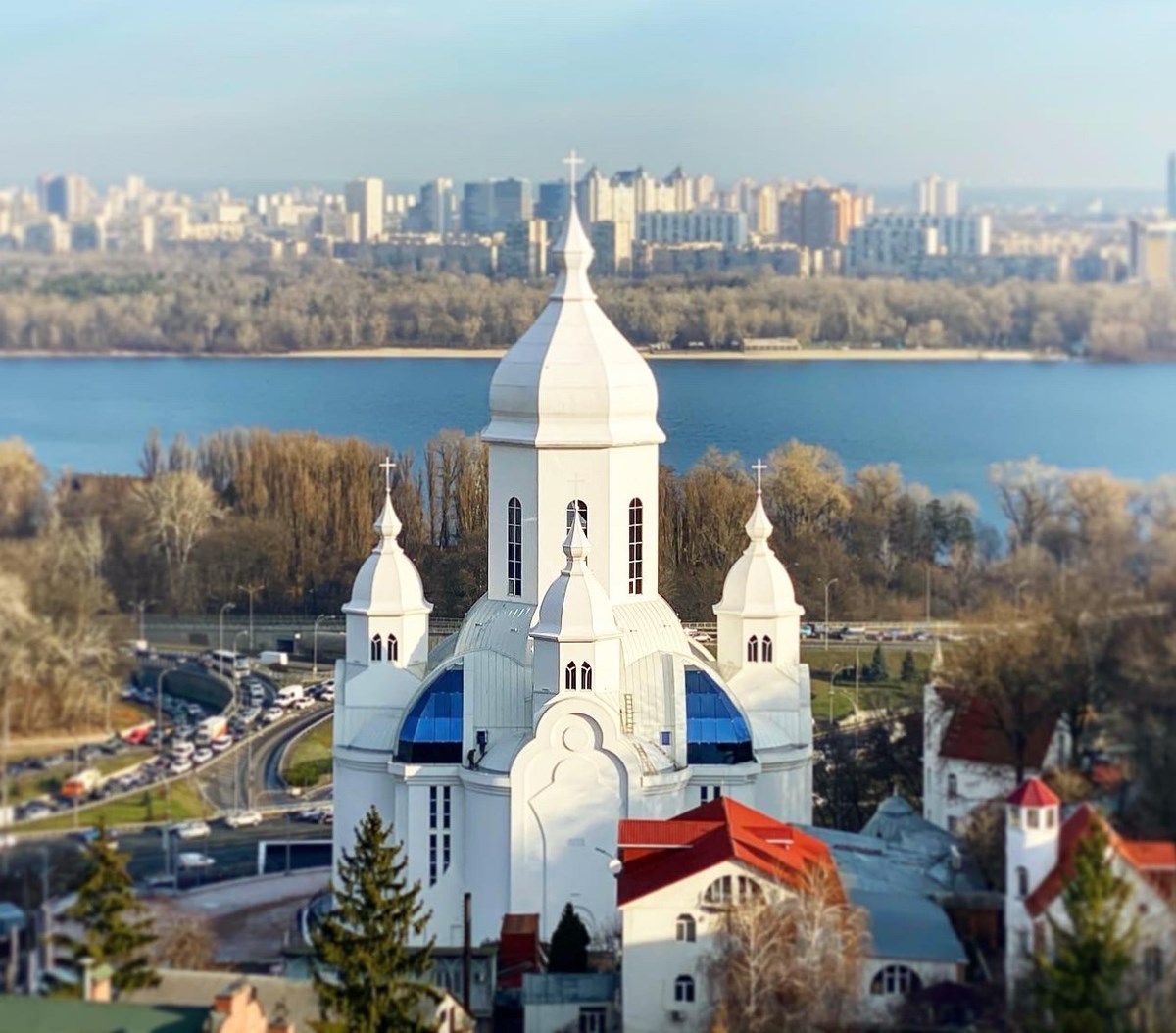 Two-thirds (65%) of the population identify as Orthodox Christians (split across three groups), 10 percent as Greek Catholic, and a further 8 percent as “simply a Christian.”

But the piety does not translate to politics. Ukraine ranks 117th out of 180 nations in Transparency International’s Corruption Perception Index—the second-lowest ranking in Europe.

As a result, 78 percent of Ukrainians distrust state officials, and 71 percent distrust politicians, according to a 2020 poll by the Razumkov Center.

But the church is trusted by 63 percent, second only to the army, trusted by 65 percent. Once reviled as a “sect,” evangelicals have benefited also from the overall social sense of refuge in the church.

“I see my career as the means to advance the values of Jesus, working for the sake of my fellow Ukrainians,” said Unguryan, elected to parliament in 2008.

“Why not go when God opens the door?”

A Baptist from Odessa on the Black Sea coast, Unguryan chairs For Spirituality, Morality and the Health of Ukraine, an inter-party parliamentary caucus that includes more than 100 of the nation’s 450 lawmakers.

It began as a simple Bible study. 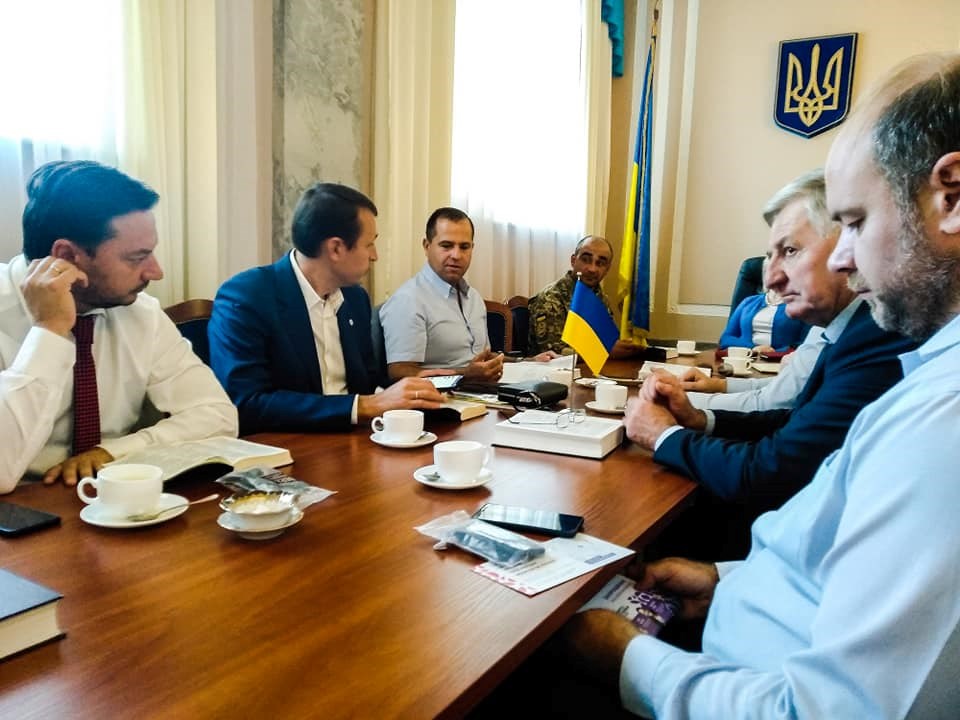 A Bible study in the Ukrainian parliament.

But if anti-corruption sentiment yielded a harvest of evangelical politicians, anti-Russian sentiment gave it birth.

First elected in 1998, Oleksandr Turchynov, a Baptist from Kiev, became a trusted lawmaker in Yulia Tymoshenko’s Fatherland party. As Tymoshenko, the former prime minister, languished in jail as a political prisoner, protests erupted in 2014 when then-President Viktor Yanukovych resisted government decisions to align with Europe.

Turchynov was elected speaker of parliament and appointed interim president when Yanukovych fled. As Russian forces occupied the Crimea and surrounding provinces that same year, he armed the Ukrainian resistance while petitioning the United Nations.

“Ukrainians viewed him with respect, as an evangelical who stood up for his country.”

Until that point, many evangelicals were drawn to Russian president Vladimir Putin’s rhetoric for conservative values. But currently, while the pro-Russian Opposition Bloc for Life holds 15 percent of seats in the Ukrainian parliament—concentrated in provinces on the eastern border—Mailuta said very few evangelicals support the party.

The reason is partly geographic.

In the interim, revival broke out in the west, and afterward Christians were persecuted by the Communist regime. Since then, evangelicals have drawn their strength from regions closer to Europe, with a pro-Western orientation.

A little over a year ago, Turchynov, Unguryan, and other believers launched the All-Ukrainian Council on a date to commemorate the entire nation-state, and evangelical service therein. January 22 was the 100th anniversary of the Act of Unification that briefly brought the eastern and western halves of Ukraine into political unity.

Image: Courtesy of the Conservative Movement of Ukraine

The founding of Ukraine's Conservative Movement.

Known in English as the Conservative Movement, the council brought together the older Council of Evangelical Protestant Churches, representing Baptists and Pentecostals, with the Ukrainian Inter-Church Council, representing newer denominations. Other parachurch and civic organizations also affiliated, so that practically all Ukrainian evangelicals can now speak with one voice.

The group is not a formal union, and Mailuta said that cooperation across denominations does not come easily to Ukrainian evangelicals. Neither is it a political entity, as the memory of Soviet repression discipled believers away from public engagement, especially in the older generations.

But if Russia’s aggression inadvertently legitimized evangelicals in the public eye, and popular frustrations over corruption lent them political support, there is a third feature that may divide the movement, even as it unites them.

“All evangelicals are conservative,” said Mailuta, nominated by Ukraine to serve on the UN Committee on the Rights of the Child.

Stirrings of evangelical cooperation began about a decade ago, focusing first on prayer, and then on social service. Mailuta cofounded a network to help orphans. Unguryan worked in youth ministry.

Today, he is the President’s Ombudsman for Children, and was the only high-level official to survive the 2019 change in administration.

Former President Petro Poroshenko hired him after defeating Tymoshenko in 2014. Current president Volodymyr Zelensky, a career comedian, kept him in his post.

Unlike in the United States, political parties in Ukraine tend to form around individual figures—not ideologies. Kuleba advises evangelicals to serve through them all.

“Believers need to be in the government,” he said.

“But it needs to be a calling, and you have to work hard to be prepared.”

After the recent elections, Kuleba gathered the winning evangelical candidates and asked them to ask God: “What is your purpose for me here?” 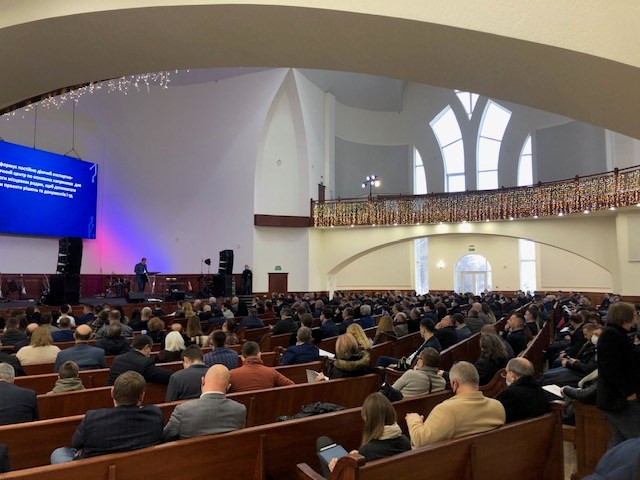 Participants at the third All-Ukrainian Forum of Christian Political Leaders, held in Kyiv on January 22.

Many are motivated to challenge the European agenda to normalize abortion and LGBT identity. But within government, Kuleba said, the Bible cannot confront these issues directly. As activists develop sexual education curricula, however, he urges the church to do the same—and design it for society as a whole.

As officials work with parents and teachers, they can promote biblical values.

“Faith must follow relationship,” Kuleba said. “I preach Christ through my actions, and faithfulness in my job.”

His current focus is on a spate of TikTok suicides that shocked Ukraine.

But unlike what is happening in neighboring Hungary and Poland, Kuleba urges Christians to not rally behind a single politician or party. Thinking also of the US, he says it is a “big mistake” to think this can change things.

“Join with many [parties], and influence them from within,” he said. “Then your values can spread across the political spectrum.”

Ukrainian evangelicals have been burned before.

In the mid-1990s, then-Prime Minister Pavlo Lazarenko tried to court the evangelical vote, winning much appreciation. By the end of the decade, he was arrested on international money laundering charges.

And in 2005, Nigerian pastor Sunday Adelaja led one of Europe’s largest megachurches in Kyiv in strong support of the Orange Revolution that confronted Ukraine’s corrupt oligarchic holdover from Soviet rule. A few years later, though he was not personally convicted, his church’s reputation was soiled by reported leadership involvement in a financial Ponzi scheme.

“I do not have such expectations,” said Unguryan.

“But with God, all things are possible.”

The grandson of a persecuted pastor, he recognizes the traditionally strong evangelical distaste for politics. But “standing aside achieves nothing,” and Unguryan has been hard at work to cement Ukraine’s public Christian heritage.

In 2011, his caucus sponsored an act to declare “the year of the Peresopnytsia Gospel” on the 450th anniversary of the first Ukrainian vernacular translation—on which presidents swear their oath of office.

In 2013, the caucus sponsored an act establishing the national celebration of the 1,025th anniversary of Ukraine’s conversion to Christianity.

In 2016, Poroshenko became the first president to attend Ukraine’s National Prayer Breakfast. That same year, the caucus sponsored the historic Orthodox nation’s act to commemorate the 500th anniversary of the Protestant Reformation. 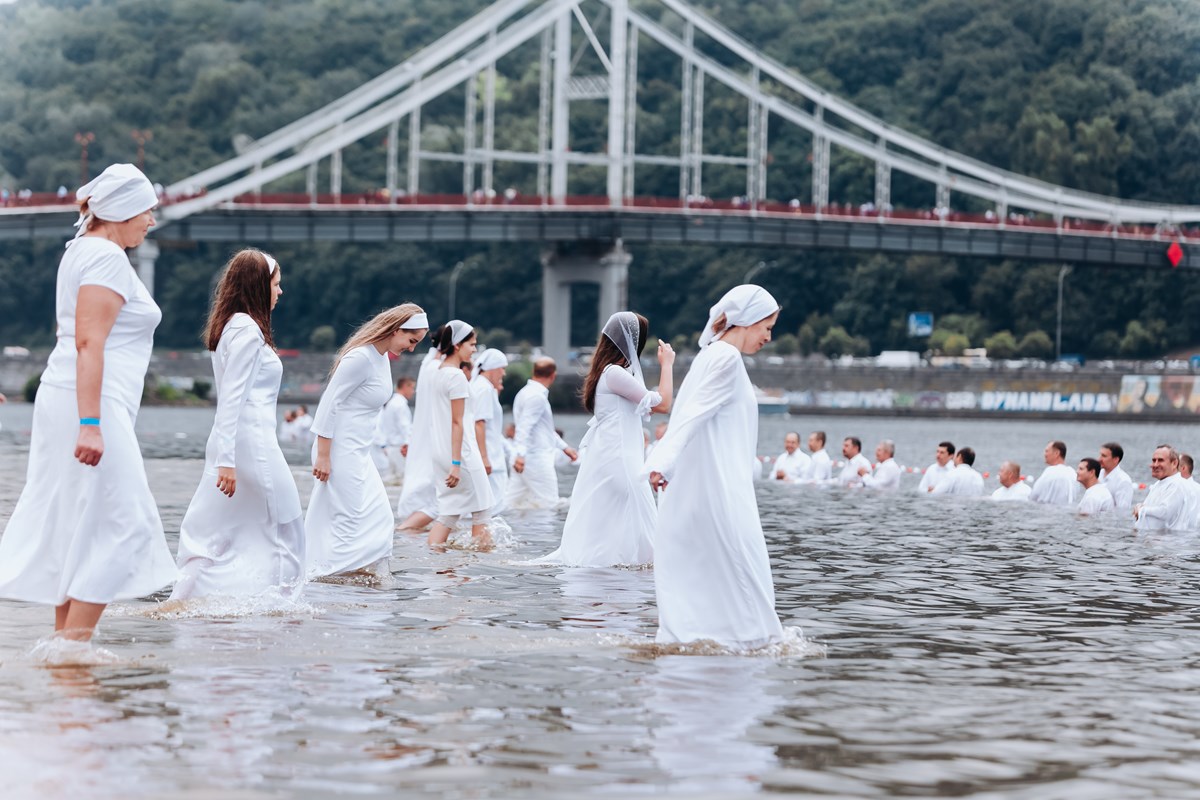 A mass baptism in Kyiv conducted by Ukrainian evangelical churches in 2018.

Evangelical efforts to organize yearlong events eventually coalesced into the Conservative Movement. With branches in every region of Ukraine, not one of its 10 committees directly addresses political involvement.

“Introducing people to the teachings of Jesus,” Unguryan said, “will change the country much faster than the activities of a party.”

But given the Russian threat, Unguryan asks for the help of the West. Not only is this politically necessary for Ukraine, Protestant churches are being shut down in the occupied regions—as once before.

And though the Conservative Movement is an evangelical initiative, he desires a broad social coalition including the Orthodox and Catholic faithful.

“Ukraine needs to implement practical Christian values into the daily life of society,” said Unguryan. “Only on this unshakable foundation we can achieve success and build a powerful state.”

Correction: An earlier version of this article incorrectly said the Conservative Movement includes the All-Ukrainian Council of Churches and Religious Organizations. It includes the Ukrainian Inter-Church Council.

[ This article is also available in русский. ]

Divided They Stand: Evangelicals Split Up in ...