(UPDATED) The Justice for Janes movement has brought forth allegations of mishandled abuse cases and coverup and challenged the university to improve its response.
Kate Shellnutt|November 5, 2021 08:57 AM 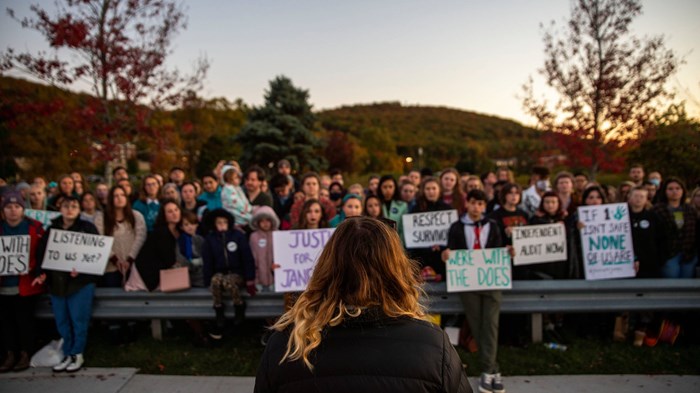 Image: Kendall Warner / The News & Advance via AP
Hailey Wilkinson, Justice for Janes representative and Liberty senior, reads the story of Jane Doe 2 to the crowd during the November 4 rally.

Liberty University students and alumni prayed and protested in solidarity with survivors of sexual assault as they called on the school’s board of trustees to authorize an independent investigation into its response to reports of abuse.

On Thursday evening, more than 100 people gathered behind a barrier along a traffic circle on campus—Lynchburg’s fall foliage aglow behind them—to hear from victims’ advocate Rachael Denhollander; former Liberty professor Karen Swallow Prior; and representatives of “Justice for Janes,” named for the Jane Does who have come forward with claims that their abuse cases were mishandled by Liberty.

They wore teal clothing and ribbons and held signs reading “We’re with the Does” and “Independent Audit Now.” Students plan to continue to rally on campus Friday afternoon.

With momentum around the movement and coverage of Liberty building for months, advocates have seen some signs of hope this week. The school announced plans to install surveillance cameras and blue-light call boxes on campus and may be moving toward an outside audit of the school’s Title IX and human resources offices.

“While Justice for Janes is grateful for the steps being taken, we understand that there is way more to be done,” Liberty senior and Justice for Janes founder Daniel Harris told the Liberty Champion. “That investigation needs to happen.”

After students struggled to secure university permission to hold Thursday night’s event on campus, interim president Jerry Prevo ended up attending and spoke with organizers and the media.

On Friday, a day after of the executive committee of Liberty’s board of trustees had voted in favor of a proposal to conduct an outside audit, the full board unanimously approved the measure.

A university press release called it “an independent and comprehensive review of its Title IX policies and processes” and said Prevo would “engage a third party to independently assess the facts necessary for Liberty University to make things right with the Jane Doe Title IX plaintiffs.”

Organizers with Save 71 and Justice for Janes have asked Prevo and the board to pledge to make the review transparent and release a report of the findings.

Beside the audit and call boxes, Justice for Janes is also requesting amnesty for those reporting Title IX violations. During this week’s convocation, Prevo pledged additional training on campus and said victims who report abuse “are not going to be disciplined” for violations of Liberty’s ethics policy, which prohibits drinking and sex outside of marriage.

In July, a dozen victims filed a lawsuit against Liberty over its abuse response, alleging that the school and its ethics code made it difficult to report abuse and penalized victims. Several of those women as well as others came forward to share their stories in a recent ProPublica investigation.

Save 71, Justice for Janes, and their supporters are hoping for an audit that’s done by an independent third party. Following the scandal that led to the resignation of former president Jerry Falwell Jr. in 2020, Liberty’s board previously commissioned an investigation into “all facets of Liberty University operations.”

That investigation, however, was done by Liberty’s legal counsel, and as Save 71 and former professor Marybeth Baggett have noted, findings were not disclosed publicly at its conclusion. Numerous victims have also said they were not queried in that investigation, which was conducted by the law firms of Gentry Locke and Baker Tilly.

A lawsuit filed last week by Scott Lamb, Liberty’s former spokesman, alleged that he was fired for criticizing Liberty’s response to sexual assault, but the school said that “played no role in his termination.”

Prevo took over as acting president last year and said at the recent convocation he “doesn’t know what happened back then” but that he’s “serious about making Liberty University a safe place.” Prior to Falwell Jr.’s departure, Prevo spent 24 years on Liberty’s board of trustees, including 17 as board chair.

Students and advocates say they have been calling for action and greater transparency from the administration for years.

“Today I have hope. And I hope and pray that current students will continue to apply pressure, as systemic problems like these don’t resolve easily, and without a fight,” wrote Jane Doe 2, whose statement was read at Thursday’s gathering.

Addressing the school’s administration and board, she said, “The opportunity to make things right remains with you; not only to create policies, but to self-reflect on your own contributions to the university’s abuses of power, to make necessary personnel changes, and to invoke checks and balances for the sake of internal accountability.”

As Students Rally for Victims, Liberty Board ...