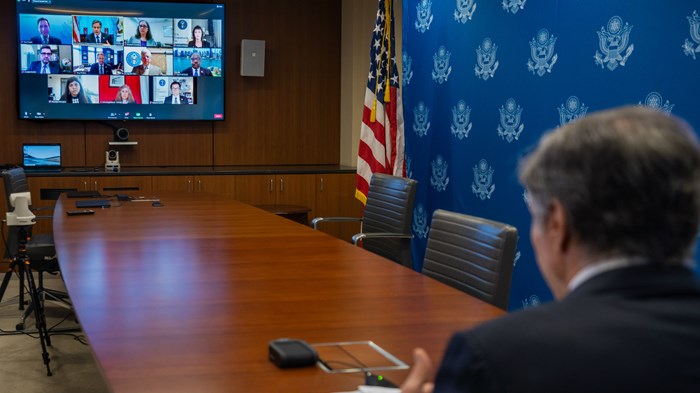 The US State Department has added Russia to its list of nations it considers among the world’s most egregious violators of religious freedom.

Russia joins Myanmar (referred to as Burma on the list), China, Eritrea, Iran, North Korea, Pakistan, Saudi Arabia, Tajikistan, and Turkmenistan on the 2021 list of “Countries of Particular Concern” (CPC).

The most controversial change: Nigeria, which was finally added to the top-tier CPC list last year, is no longer included.

Nor is the troubled West African nation listed on the second-tier “Special Watch List” (SWL), where Russia had been listed in the 2020 designations. Meanwhile, Algeria was added to the watchlist, joining Comoros, Cuba, and Nicaragua, which were also listed in 2020.

“In far too many places around the world, we continue to see governments harass, arrest, threaten, jail, and kill individuals simply for seeking to live their lives in accordance with their beliefs,” Secretary of State Antony J. Blinken said Wednesday in an announcement. “This Administration is committed to supporting every individual’s right to freedom of religion or belief, including by confronting and combating violators and abusers of this human right.”

“The challenges to religious freedom in the world today are structural, systemic, and deeply entrenched. They exist in every country,” stated Blinken. “They demand sustained global commitment from all who are unwilling to accept hatred, intolerance, and persecution as the status quo. … We will continue to press all governments to remedy shortcomings in their laws and practices, and to promote accountability for those responsible for abuses.”

The US Commission on International Religious Freedom (USCIRF) said it was “appalled” at Nigeria’s “unexplainable” removal.

Sam Brownback, the State Department’s religous freedom ambassador when the 2020 designations were made, stated Nigeria’s “sudden removal” is a “serious blow” to religious freedom in the region.

“Just when we should be doing everything possible to stop the relentless violence that’s targeting Christians and others, we do the opposite,” stated Brownback, now a senior fellow at Open Doors USA, which ranks Nigeria ninth among the world’s top 50 persecutors. “This rewards the Nigerian government for tolerating severe religious freedom violations and sends a message to extremists that their actions will continue to go unpunished. People of faith in Nigeria will bear the fallout of this decision, and that’s unacceptable.”

Open Doors has “documented thousands of targeted killings of Nigerian Christians every year for more than a decade,” said CEO David Curry.

“In no other country on earth do we see such a sustained level of outright violence directed towards a Christian community, and the situation has only deteriorated over the past 12 months,” he stated. “The Nigerian government has stubbornly refused to address this violence. The removal of Nigeria from this list will embolden bad actors and strongly deter efforts to bring peace to the region.”

Samson Olasupo Ayokunle, president of the Christian Association of Nigeria (CAN), told CT that CAN was not consulted on last year’s designation or on this year’s removal. He said the Nigerian government needs to “prove that there is real religious freedom” amid “unprecedented insecurity.”

“It would be the joy of Christians in Nigeria if lip service was not paid to religious freedom,” the Baptist pastor said, “but that it was actually so.”

Ayokunle noted the two EPCs present in Nigeria, Boko Haram and ISWAP, are “hell-bent on wiping away Christians and Christianity from Nigeria,” especially in the northeast, and urged the government to work harder to ensure the militants are “subdued or totally eliminated.”

“This clearly shows the State Department recognizes the significant challenge of religious freedom in Nigeria,” said Gideon Para-Mallam, president of the Jos-based Para-Mallam Peace Foundation, of the EPC designations.

“It goes without saying that religious persecution in Nigeria today is ‘structural, systemic, and deeply entrenched,’” he said, purposefully echoing Blinken’s words, “and, in addition, involves very deadly physical attacks on Christians. The culture of denialism when it comes to religious persecution by this present government in Nigeria has blindfolded the US government.

“It is better listing Boko Haram and ISWAP on the EPC list than nothing at all, but this is insufficient,” Para-Mallam told CT. “First, the Fulani herdsmen killers and bandits will continue with their killing spree, as the Nigerian government has woefully failed to stop them. Second, the denialism narratives being churned out by this government and its apologists will continue. Third, people will lose faith in finding justice and will be tempted to resort to self defense.”

Ayokunle also urges the Nigerian government to demonstrate more clearly that its policies don’t favor Islam or Christianity, which he said number about 100 million adherents each. For example, the Ministry of Education supports a national board for Arabic and Islamic studies but not a parallel one for Christian education and biblical languages.

“We love our Muslim counterparts and we are constantly holding meetings with them towards peace-building in the country,” said Ayokunle, cochairman of the Nigeria Inter-Religious Council. Yet he cited the recent kidnappings of scores of Christians in the northern state of Kaduna.

“If the persecution the church is experiencing in Nigeria is not religious persecution, how do we then classify it—especially when the people responsible for these acts are Muslims?” he told CT. “While I do not support religious or ethnic profiling, we cannot at the same time say that we do not know those attacking us.”

“Though today Muslims are equally being attacked, because kidnapping has become a lucrative business and the madness of criminality has grown, the fact that these criminal acts began with some Islamic groups declaring war on Christians and Christianity makes what is happening in Nigeria to be regarded as religious persecution,” he said. “It is not the Christians that are killing Christians.”

USCIRF “welcomed” Russia’s addition to the CPC list, having recommended such a designation since 2017.

“For years, USCIRF has raised the alarm regarding the Russian government’s purge of ‘non-traditional’ religions and religious freedom repression,” stated vice chair Nury Turkel. “USCIRF also applauds the inclusion of Algeria in the State Department’s SWL designations this year, which USCIRF has recommended since 2020 due to continued enforcement of blasphemy laws and restrictions on houses of worship for minority religious communities.”

Earlier in November, USCIRF had reiterated its recommendations for the State Department’s 2021 designations, advocating that four nations be added to the CPC list (India, Russia, Syria, and Vietnam) and that 10 nations be added to the watchlist (Afghanistan, Algeria, Azerbaijan, Egypt, Indonesia, Iraq, Kazakhstan, Malaysia, Turkey, and Uzbekistan).

“For years, the Russian government has conducted a purge of ‘non-traditional’ religions, frequently labeling as ‘extremists’ and imprisoning peaceful Jehovah’s Witnesses, and readers of the moderate Islamic theologian Said Nursi,” USCIRF stated in a November fact sheet. “Russian courts continue to deliver harsher and more numerous prison sentences for Jehovah’s Witnesses seeking to practice their faith.”

“In addition, Russia has exported its repressive religious regime to the neighboring country of Ukraine,” stated USCIRF. “‘Authorities” in Russian-occupied Crimea and the Russian-backed Donbas commit widespread religious freedom abuses, including false charges of Islamist terrorism to imprison Crimean Tatars.”

CT has reported how Russia’s efforts to prevent terrorism have restricted the religious freedom of non-Orthodox faiths, especially Jehovah’s Witnesses and evangelical Christians, including most recently seminary shutdowns. Germany has offered asylum to Baptists fleeing fines for evangelism, while Russian evangelicals have wrestled with whether to defend Jehovah’s Witnesses after the pacifist faith was banned as extremist.

CT offers a report in Russian of the world’s 50 worst persecutors of Christians (according to Open Doors), alongside 11 other translations.