When the military closed Khartoum’s airport and disrupted their discipleship training, a generational odd couple from YFC Lebanon improvised and preached to hundreds of students.
Jayson Casper|November 3, 2021 10:15 AM 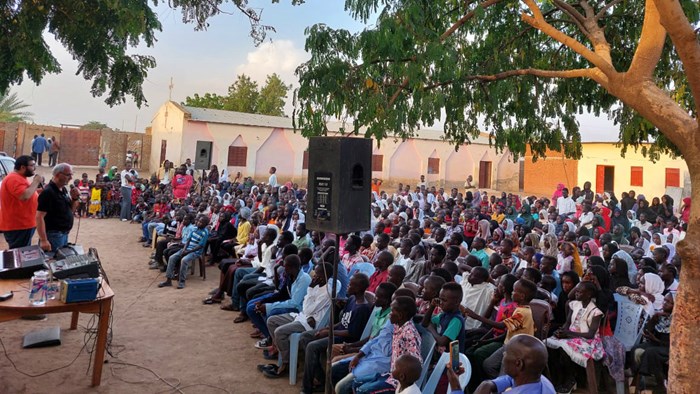 At 6:30 a.m. last Monday, John Sagherian and Elie Heneine went down to the lobby of their three-star hotel in eastern Sudan and found a crowd gathered around a TV. Filtering in, they heard the news.

The military had staged a coup in the capital, Khartoum, 90 miles to the northwest.

“Instantly, everything we planned for that day was up in the air,” said Heneine, a 27-year-old staff worker with Youth for Christ (YFC) Lebanon. “Oh well, youth work is very organic.”

Sagherian, the 74-year-old YFC regional director, had long been “dying to visit” Sudan. Two years earlier, he had identified a promising country director named Sabet, who since then had recruited seven other volunteer staff members. Sabet even ignored the capital, concentrating instead on the poorer hinterland.

The Lebanese team of two were finally scheduled to meet their new Sudanese colleagues later that day. As malaria had been among their concerns, they had taken 100 mg of medication every day for two weeks prior. The visa had also been a complication, requiring multiple layers of bureaucracy. But it was the BBC app that now troubled Joy, Heneine’s American wife of five months, as Sudan increasingly filled her news feed.

Heneine himself was at peace. Not only was he used to instability as a Lebanese Christian, but Sabet and others assured them everything was fine—despite the political tumult between the once-cooperating military and civilian leaders.

In 2019, the Sudanese army backed massive protests to overthrow 30-year dictator Omar al-Bashir. A spate of religious freedom reforms replaced his Islamist governance, normalization agreements were signed with the nation’s former enemy Israel, and the US removed Sudan from its list of state sponsors of terrorism.

The economy was struggling, but the World Bank was poised to help. Sudan was almost ready to rejoin the community of nations. But politicians were bickering, and a military coup had been suppressed only one month earlier.

In the background was disagreement over sending Bashir to the International Criminal Court to be tried for war crimes in Darfur. Deeper still were issues of army control of large sectors of the economy. And at an unspecified but fast-approaching date, the transitional Sovereign Council was supposed to switch to civilian leadership.

Two days before the coup, the YFC team had traveled three hours over bumpy roads with multiple checkpoints to reach Wad Madani, Sudan’s ninth-largest city. Sabet’s youth office was located in an evangelical school, and he’d invited Sagherian to preach to the local congregation that Sunday evening. 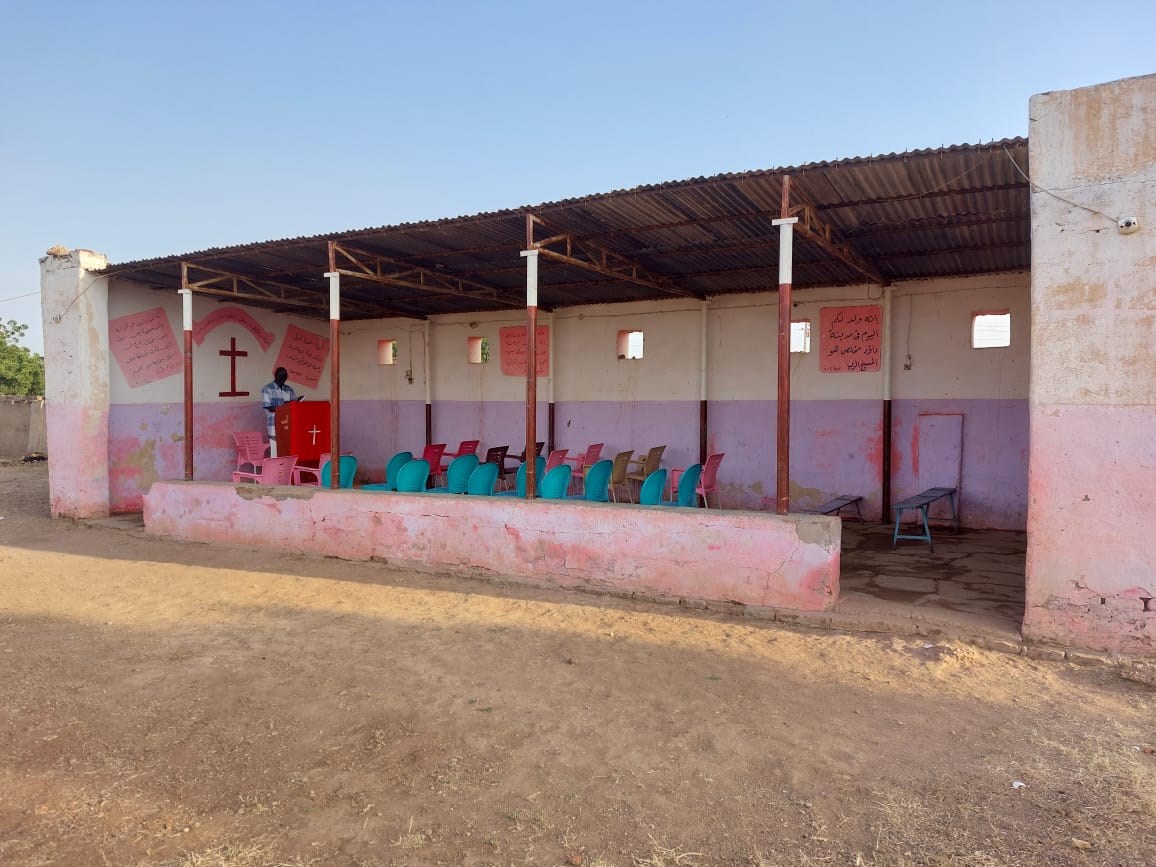 With men sitting up front on plastic chairs and women behind, about 30 people filled the three-walled, tin-roofed structure. Such impromptu invitations were not unusual for the still-active senior, so Sagherian pulled out a message he had given often to Lebanese, Syrian, and Egyptian youth.

The title proved prophetic: “Why Is God Doing This to Us?”

“Do we become angry and bitter or say, ‘What now, Lord?’” Sagherian recalled preaching. “And then the coup happened [the next day].”

He spoke from experience. Ten years earlier, his beloved wife, Nancy, died of cancer. Her acceptance of God’s will in their final weeks together inspired another decade of her husband’s ongoing service.

Eventually, the team learned that Christians in Wad Madani had joined their fellow Muslim citizens in overwhelmingly rejecting the coup. But first, YFC had to reach the local believers.

A group of 35 leaders from the three evangelical churches in the city had been prepped for their arrival. Sabet went to learn firsthand whether the training sessions would still be held; it was two hours of silence before he returned.

“They are waiting for you,” he said.

Sabet hailed a tuk-tuk, one of the three-wheeled auto rickshaws that serve as local taxis. The three leaders joined five others and a baby goat sitting on the rail, knees knocking, continuously jostling, as the 15-year-old driver navigated the poorly paved road.

“That was a lot of human beings, and I am like five people,” said Heneine. “It was the workout of our lives just to hold on.”

That was only the start. Moving across town, they witnessed protesters breaking up the sidewalk to pile makeshift barriers to block traffic. They circled the neighborhood looking for a thruway, only to turn back and discover a new one. Eventually they pleaded as “one of the people” and were allowed passage.

But there was no animosity, said Heneine. Unlike in his native Lebanon, there was incredible unity among the Sudanese, with none opposed to anyone except the coup leaders.

And they were also organized. The Sudanese would go to their jobs, except they would not work—answering the call for civil disobedience. And at noon they would gather in the streets, block roads, and burn tires. Even the bread lines, an unfortunate consequence of the economic stress, would disappear.

Sagherian instructed the youth workers from Psalm 78: David led the people with competence and integrity of heart. It appeared evident all around.

By Tuesday (October 25), the YFC team grew to recognize the rhythms of the protest and how to best move around. By the afternoon, the government had cut off phone and internet service across the nation to disrupt the protest movement. It also disrupted YFC’s best-laid plans.

So they continued to disciple Sabet and his seven staff members and resigned themselves to a reduced training schedule. Now relaxed, they enjoyed a fish lunch with lemonade on the banks of the Blue Nile. And they took a PCR test, ready to fly home the next day—only to learn on Wednesday that the airport had been closed.

Stuck, the YFC leaders scrambled and called for a youth meeting in a poor village on the outskirts of town the next evening.

Sabet worked with the headmaster, who about a decade earlier had become the neighborhood’s first convert to Christianity. But he wasn’t the last. Sharing the gospel, this man gathered new believers into a mud-hut home fellowship. Then he built a church; then, a school. And now he called the 95 percent Muslim student body to attend a youth rally—and told Sagherian he should preach clearly about Jesus. 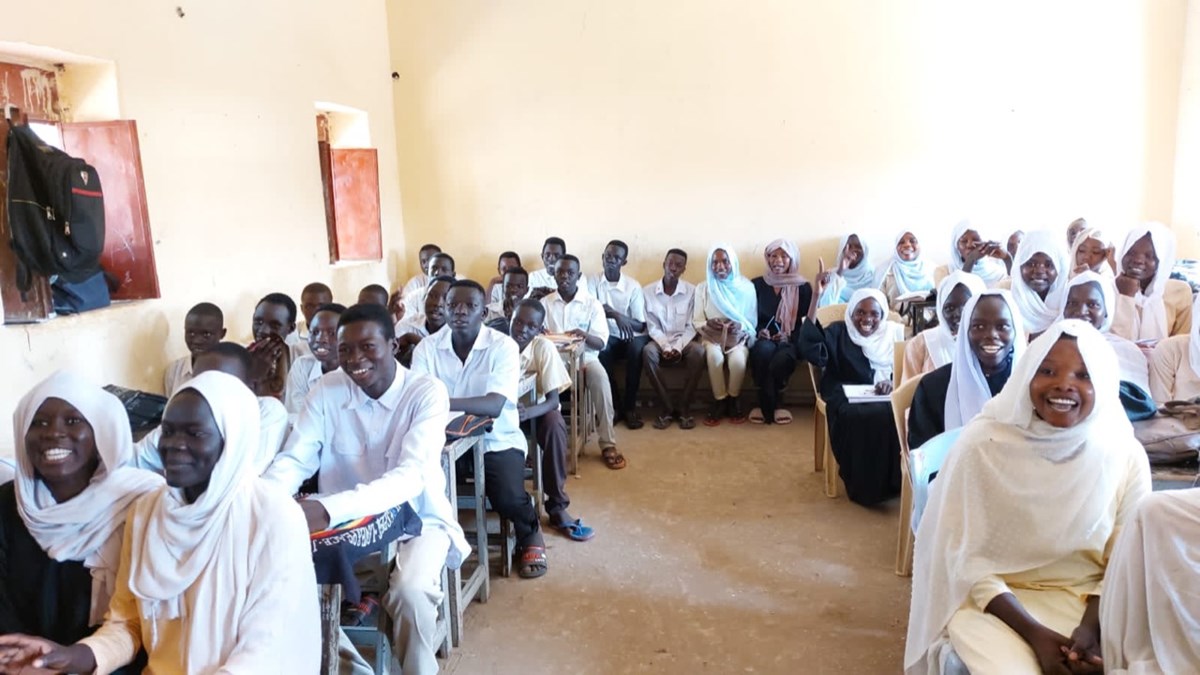 Students in a classroom in al-Thawra near Wad Madani, Sudan

Raised as a pastor’s kid in the Armenian evangelical community of Lebanon, Sagherian was familiar with altar calls. He assumed national leadership of YFC in 1974, becoming the Middle East and North Africa regional director in 2010. From decades of ministry experience among mostly Christian-background students, he expected maybe 100 kids to show up. It would be incredible if five gave their lives to the Lord.

Over 1,000 filled the dirt-covered schoolyard grounds.

Imagine you had to swim from the Red Sea coast to India. Some of you might get farther than others. But none of you would make it. Your good lives cannot satisfy God.

Imagine if I suddenly had the mind of Ronaldo controlling me. I’m 74, but I’m darting all over the soccer field, scoring goals. This is what happens when Jesus comes into our lives: We now satisfy God.

He asked those who wanted to give their lives to Jesus to stand up. Nervous, one did here, then there. But before long, the entire student gathering was upright.

Wait—something was off. Sagherian pressed the importance of the decision. Having the students sit down, he asked them this time to raise their hands. Perhaps more aware, 80 percent did so.

God knows the heart, he counseled himself. And he remembered his father’s words from many years ago: “You talked to them about God. Now talk to God about them.”

Heading back to the hotel, the YFC team learned the airport would open the next day, but nothing was certain. They woke at 5:30 a.m. and providentially arranged a taxi. Entering Khartoum, they saw lines of well-armed police officers. Saturday was to be a million-man demonstration, and the security forces were preparing. (To date, 15 protesters have been killed.)

Another PCR test was required at the airport, but the office was closed. Somehow, the man in charge agreed to come, two hours later than promised. The clock was ticking. But the nose swab’s negative results were returned in five minutes—surely an example of Sudanese corruption but perhaps also of God’s provision.

The airport was sweltering, packed with people anxious to leave the country. But boarding was smooth, and after an overnight layover in Addis Ababa, their Ethiopian Airlines red-eye flight landed in Beirut.

“We were living out the promises of God,” said Sagherian. “I never felt we were in danger, and we learned that so many people were praying for us.”

They asked instead for a shift in focus.

“We were two people who did our ministry and left, while Sudan continues to fight with itself,” said Heneine. “Be praying for them.”

Sabet told them that he has always been free within church buildings. But only since the revolution had he been able to minister in the public square. “People don’t care about religious background any longer,” he told them, and his good reputation in the village earned him much trust.

But Sabet doesn’t know what will happen after the coup.

In a potentially ominous sign, military leaders have released some of Bashir’s top officials from jail. International actors continue to mediate, while the deposed prime minister holds his ground.

So much is at stake for the Sudanese.

But for the Lebanese, who simply expected a normal time of training youth, the experience was transformative. Sagherian choked up, recalling the opportunity to share the gospel with so many Muslim youth. Heneine learned how to “wait on the Lord” from his senior colleague.

“God moved circumstances and people, putting us in places we couldn’t have imagined,” said Heneine. “It was like a well-played chess match, and God won.”