Headed to UN meeting in Glasgow, creation care advocates talk about what churches can do and what they are doing.
Ken Chitwood|October 21, 2021 06:00 AM 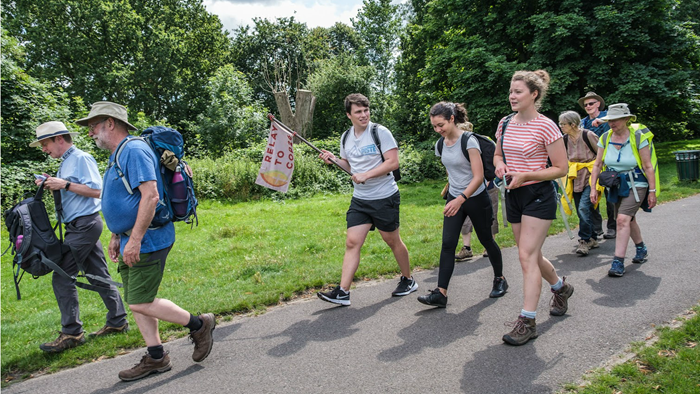 Rachel Mander’s walk to Glasgow began with the Bible.

Then she couldn’t stop seeing it.

“It’s like looking for angels in the Bible,” she said. “You don’t notice how many there are until you actually look and then you see them popping up everywhere. Me and my friends started reexamining Scripture and seeing how being a person of faith means you care for the environment. Suddenly, it was on every page.”

Today, 24-year-old Mander is one of the coleaders of a 750-mile relay-pilgrimage from the southwestern tip of the United Kingdom to Glasgow, Scotland, where this year’s UN Climate Change Conference, known as COP26, will begin opening ceremonies on October 31.

The Young Christian Climate Network (YCCN) has organized about 2,000 people to make the walk. Convicted that the climate crisis is pressing, urgent, and must be resolved in this generation, they are pleading with church institutions, governments, and local congregations to take concrete steps to reduce carbon emissions.

They hope that their journey will raise awareness, rally people to the cause, and put pressure on governments to address the fact that burning fossil fuels has substantially increased the atmospheric concentrations of greenhouse gases, with serious negative consequences around the world.

Mander said that so far, the commitments have failed to materialize and global temperatures continue to rise.

“I’m both really looking forward to walking into Glasgow with the relay to COP26 and simultaneously terrified of the false optimism of witnessing a conference happy to sleepwalk into a decade of emissions increasing 16 percent, not dropping 45 percent,” she said. “I’d like the church to see taking action on climate change as something for us all to take part in, as a journey we are all taking steps toward together.”

On the relay, creation care advocates compared notes on what churches can do, and what they are doing.

“We had some great conversations encouraging one another in what we were individually doing in our own churches,” said Sarah Moring, who walked with YCCN from Manchester to Leeds.

Moring said that it is easy to feel isolated by concerns about climate change and that there’s nothing that one person can do in the face of dire environmental threats. But with other Christians on the relay, she was reminded of the words of the Spanish poet Antonio Machado, who wrote, “The road is made by walking.” Often adopted as a metaphor for pilgrimage and spiritual journeys, Moring said it was also her clarion call for action. Even if the journey seems impossible, you have to make a start.

Melanie Gish, author of God’s Wounded World: American Evangelicals and the Challenge of Environmentalism, said there has been a small but persistent group of activists since the 1970s who have seen climate change as a gospel issue.

“For them, this isn’t just activism; creation care isn’t just a flimsy term,” she said. “The cause becomes a religious and civil obligation—their calling—inseparable from their evangelical faith.”

The activism has often involved “creative negotiation and diplomatic wrestling,” according to Gish, but evangelicals have built organizations and institutions to move Christians toward creation care and mobilize them to act. Examples include YCCN, as well as the Au Sable Institute, the Evangelical Environment Network, Young Evangelicals for Climate Action, the Evangelical Climate Initiative, Climate Intercessors, and Care of Creation.

One pioneer in the work that Mander and others in YCCN point to is Care of Creation founder Ed Brown, who has advocated for environmental stewardship for more than 20 years.

“Creation care is not optional,” Brown said. “It flows out of a genuine encounter with the gospel. We should be caring for creation even if it were not in crisis.”

It would be easier if there weren’t a crisis, though. According to a 2015 study from the Program on Climate Change Communication, evangelicals are most likely to believe God expects humans to be good stewards of creation. At the same time, they are the least likely among Christians to believe that climate change is real and human-caused.

There are also evangelicals who actively oppose the idea that burning fossil fuel is causing climate change, despite the extensive scientific evidence, and object to any government measures aimed at reducing emissions. The Cornwall Alliance for the Stewardship of Creation, for example, founded by evangelical Calvin Beisner and supported by James Dobson, D. James Kennedy, and others, argues “a sound environmental ethic” would focus on wise use of God’s creation, and not be led astray by “erroneous theological and anthropological positions.”

The Cornwall Alliance recently published an article calling the latest scientific assessment of climate change “silly” and warning readers that COP26 would be an excuse for “a crescendo of hyperbolic calls for action.”

That kind of rhetoric is frustrating to people like Brown.

“The calamitous effects of the climate crisis are accelerating more rapidly than we thought they would, and society is uniquely unprepared to cope with waves of refugees, disaster after disaster, and political turmoil,” he said. “It’s on the church to do something.”

Despite some strong opposition, though, Brown and creation care advocates are encouraged by growing numbers of Christians around the world who are concerned about climate change and want to do something. Besides the 2,000 people walking a portion of the road to Glasgow, Brown points to the Lausanne/World Evangelical Alliance Creation Care Network and its Global Campaign for Creation Care, which he helps lead. In the last nine years, the campaign has worked with evangelicals in 150 countries.

Another sign of new momentum, according to Brown, is Operation Noah’s Bright Now campaign, which has had notable success persuading churches in the UK to divest from fossil fuel.

In Ireland, the Anglican Church was convinced to reduce its investment in fossil fuel companies from 10 percent to zero—a total of 50 million euros, or about $58 million.

Stephen Trew, divestment campaigner for the Church of Ireland, said that kind of change often doesn’t come from church leaders, but from the laity. For young people in particular, environmental activism often starts at church.

“Help people in your community to connect the dots,” he said.

For the YCCN, helping people connect the dots has meant organizing the relay. At the end of October, three months after they began, the group will arrive at COP26.

“This is not a photo op, this is the story of my life, and in talking to others on the relay, it’s the story of our generation,” Mander said. “It’s up to us to put the world on track and to deliver on the climate.”

Looking ahead to COP26 and beyond, Mander said she hopes the relay serves as encouragement to others along the road.

“As we walk, we show the way,” she said. “There’s no road to zero emissions unless we start to move toward it together, today.”