The outspoken host and pioneering Christian broadcaster has been the face of CBN since its founding 60 years ago.
Kate Shellnutt|October 1, 2021 10:40 AM 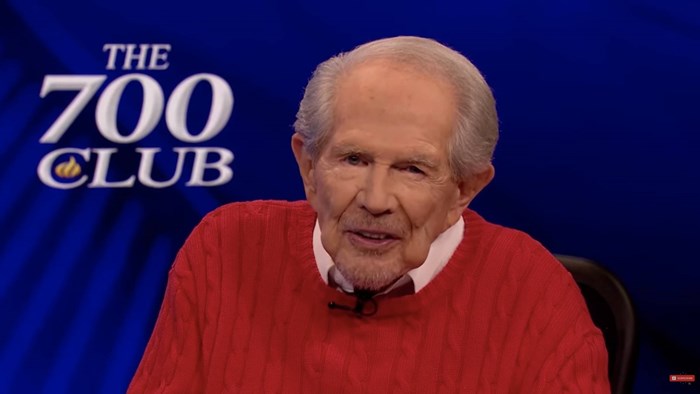 After decades of offering Christian viewers his commentary on natural disasters, 9/11, AIDS, pot, divorce, diplomacy, plastic surgery, homosexuality, Islam, secular colleges, the end of the world, critical race theory, and a range of other moral issues, Pat Robertson has signed off as host of The 700 Club.

On the 60th anniversary of the Christian Broadcasting Network (CBN), its 91-year-old founder announced that he would be stepping down and that his son, Gordon Robertson, would take over as full-time host of its flagship talk show.

Robertson, also the founder of Regent University and the Christian Coalition, has been a pioneer in evangelical broadcasting. He launched CBN as the country’s first Christian network in 1960, and CBN has grown to air in 174 countries and 70 languages. It added a 24-7 news channel in 2018.

At the helm of the Virginia-based network, Robertson was ambitious and creative, believing that CBN could grow to a place alongside major channels and thus have a greater impact for the kingdom.

But particularly in the past couple decades, the long-running host became known for controversial declarations on politics and prophesy, which stirred even fellow evangelicals.

When Robertson called on the US to assassinate Venezuelan president Hugo Chavez 15 years ago, for example, top evangelical leaders called it an “embarrassment” and “in complete contradiction to the teachings of Jesus Christ.” Over the years, he’s had to backtrack and apologize for certain comments.

During his career in front of the camera, Robertson—a Southern Baptist minister who campaigned for the Republican Party presidential nomination in 1988—interviewed five US presidents and dozens of global leaders. He was among the Christian leaders who prophesied Donald Trump would be reelected in 2020.

Robertson responded to questions from viewers and spent a portion of each show praying for his audience.

He saw his role at CBN as his form of evangelism, previously telling CT, “I believe that Jesus Christ is part of everything that we do in our lives. We want to show the full-orbed life through the perspective of Jesus Christ. You have to deal with people as they are and not as you would like them to be, because the world is not a giant church service.”

Robertson suffered a stroke in 2018, but continued appearing regularly on the show. The network said that after his retirement from hosting he will continue to teach at Regent and appear occasionally on CBN broadcasts, including a monthly Q&A episode.