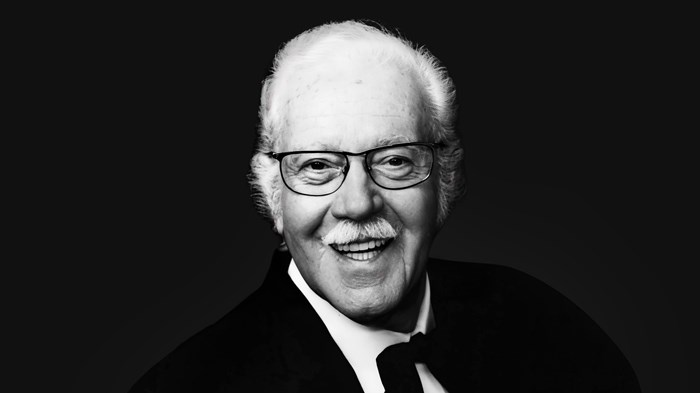 Ralph Carmichael, a composer and record producer who shaped the sound of contemporary Christian music, died on October 18 at age 94.

A violin prodigy with perfect pitch and a love for jazz chords, Carmichael built his reputation in Los Angeles TV and film studios before turning to Christian music and throwing open the doors for a new generation to use any and every style to sing about Jesus.

When he recorded his best-known song, “He’s Everything to Me,” featured on the Billy Graham World Wide Pictures production The Restless Ones, he brought two guitars, an electric bass, and drums into the studio and kicked off a firestorm of controversy. He featured the new sound in several popular youth musicals and later established Light Records as a label for rising contemporary Christian artists.

“What I have been doing most of my adult life,” he told the Christian Herald in 1986, “is waging stubborn battle for the freedom and liberty to experiment with different kinds of music for the glory of God.”

When tributes poured in near the end of his life, many called Carmichael the “father of contemporary Christian music,” a title he sometimes shared with Christian rocker Larry Norman, despite their obvious differences in style.

“I want neither credit nor blame for creating today’s musical forms,” he once told CT. “I ask only for guidance to know how to use them in good taste to reach ‘now’ people with a message that never changes.”

His “now” music would borrow from any style: pop, jazz, country, rock—all packaged with slick arrangements that sounded good on radio and television. Despite these commercial roots, his music became popular in evangelical worship services and influenced a rising generation of Christian music artists.

“I remember growing up going to my church in Kenova, West Virginia, and singing the music of Ralph Carmichael,” Michael W. Smith told CT this week. “I sang in the New Generation Choir every Sunday night—and I just had not heard anything like it. … He brought a fresh new sound to the 1970s that literally changed my life.”

Carmichael was born in Quincy, Illinois, on May 27, 1927. His father, an ordained Assemblies of God minister, noted Ralph’s precocious affinity for music and started him on violin lessons at age three.

When his father took a church in San Jose, California, Ralph joined the local orchestra while still in high school. Insatiably curious about music theory, he often listened to radio orchestras while sitting at the piano, picking out the notes they played. Immediately he noticed a different sound than conventional hymnal harmony—chords with flatted fifths and ninths, jazz progressions that he taught himself to play.

At 17, he enrolled at Southern California Bible College (now Vanguard University), intending to become a preacher like his father and grandfather. Within a few weeks he was organizing music groups to minister at local churches, a passion that soon overshadowed his studies.

Classmates noticed his keen ear—he could write entire scores while sitting in the corner, away from the piano. The music faculty tried to correct his “wrong” notes, but Carmichael persisted, and his 17-piece stage band began playing on a local television station. The resulting show, The Campus Christian Hour, became a regional favorite.

After hearing Evangeline (Vangie) Otto sing on the radio in 1948, Carmichael tracked her down and they started dating. Soon they married, and for a time their musical relationship seemed ideal. A daughter, Carol Celeste, was born in 1949, but Carmichael’s professional obligations seemed to leave little time for his family.

The television show earned an Emmy in 1951, and suddenly Carmichael was very busy. Two Christian record labels were starting in the Los Angeles area—Sacred Records and Alma Records—and both needed music arrangements.

Carmichael also joined the staff of Temple Baptist in Los Angeles. Despite his Pentecostal roots, he was ordained a Baptist minister.

“In those days,” he later said, “I would work for anybody who could afford me, regardless of their denominational affiliation, so long as they named the name of Christ.”

As the church grew, Carmichael created increasingly sophisticated musical programs that required the skills of professional musicians. He began hiring studio players for the church’s special events. Soon he was using the same players for his recording sessions with Christian artists.

Always thinking big, Carmichael persuaded the owner of Sacred Records to record a project with full orchestra. He recruited the studio players, paying them union scale, and rented Studio A at Capitol Records. Carmichael chose 12 hymns and wrote arrangements to sound exactly like the popular “dinner music” of the era. When Rhapsody in Sacred Music was released in 1958, it signaled a milestone in the fledgling industry.

Carmichael had discovered his secret sauce—the top-notch Los Angeles studio musicians who could play anything he imagined, with a level of perfection unattainable by the average church group. For the rest of his career, he enjoyed a unique relationship with these first-call players, and many played on his projects for decades.

His new album was discovered by a producer for Nat King Cole, who was planning a new Christmas album. They got along famously—Cole was also a preacher’s kid—and Carmichael ended up touring with him and arranging his studio albums.

For the next 40 years, whenever Hollywood needed a hymn arrangement or a Christmas album, they called Carmichael, the affable minister with the golden ears.

Despite his newfound success in the music world, his nonstop schedule took a toll on family life. Carmichael admitted to “indiscretions” and a growing addiction to Dexamyl, which kept him amped up for late-night scoring sessions.

After a year of separation from Vangie, the couple divorced in 1964. Carmichael hoped it would remain quiet, but the family split was reported by the Los Angeles Times: “The Song Is Ended for the Carmichaels.”

He threw himself even more fully into the music, working nonstop. In that difficult and lonely period before he was married a second time to a woman named Marvella Grace and became a father to her three children, he reflected on his failures.

“Until we give ourselves back to God, we can never be free,” Carmichael said in his 1986 autobiography. “Of course, by ‘free’ I surely don’t mean irresponsible. The fact is, the freer you are, the more responsible you become.”

‘He’s Everything to Me’

Social redemption came from an unexpected place. Billy Graham and Cliff Barrows were looking at their crusade audiences and noting a lot of gray heads. Their formula for stadium events seemed flat, and their innovative Youth for Christ music was now 25 years old. They wanted a new film that spoke to contemporary issues, and they wanted Carmichael to score it.

A year earlier Carmichael had experimented with rock-and-roll instrumentation for pianist Roger Williams, turning “Born Free” into a million-selling hit. Now he tried the same with the central song in The Restless Ones, “He’s Everything to Me,” giving it a straight-eighths rhythm and a hint of a backbeat.

The song sold five million copies in sheet music and was recorded by more than two hundred artists.

Was it rock? Sort of. The vocals were sung by a fresh-sounding youth choir, and the song ends with a tympani roll—not exactly a head-banger, and certainly not “rock” to upstarts like Larry Norman. But church leaders offered plenty of criticism, whatever it was.

But Carmichael continued writing in the new style, especially with composer and friend Kurt Kaiser, who called their new style “folk musicals.”

Carmichael continued to expand conceptions of “Christian music” with the discovery of Andraé Crouch, who was directing the Teen Challenge Addicts Choir. Carmichael followed Crouch for eight months, quizzed him about his spiritual commitment, then signed him to Light Records. They became fast friends, and the relationship led to several other Black musicians signing with Carmichael.

Though he viewed himself as a maverick, Carmichael lived long enough to see his music become mainstream. He recorded Strike Up the Band in 1994, a full album of gospel jazz, but found that many stores stocked it on the traditional shelf. The same was true for many of his songs. They became popular with youth groups, and a few were even added to evangelical hymnals, such as “The Savior Is Waiting” and “He’s Everything to Me.”

He scored or produced 200 albums and wrote 3,000 musical arrangements.

Near the end of his life, he donated his music library to the Great American Songbook Archives, Baylor University, and the University of Arizona Jazz and Popular Music Archive. He was inducted into the Gospel Music Hall of Fame and the National Religious Broadcasters Hall of Fame.

Carmichael is survived by his wife, Marvella; children Andrea, Greg, and Erin; and several grandchildren and great-grandchildren.