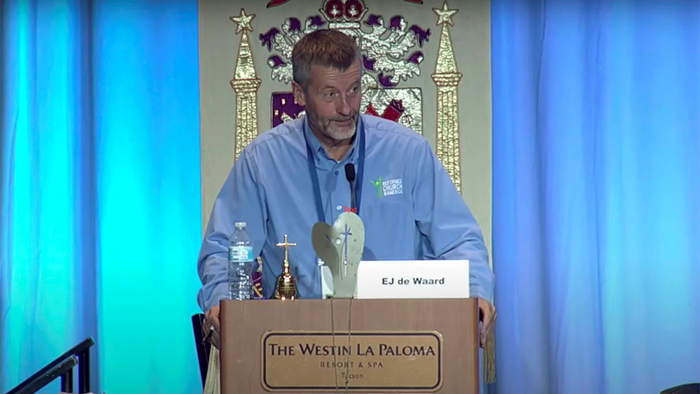 The Reformed Church in America’s 214th General Synod, taking place in Tucson voted Saturday to appoint a team to develop a restructuring plan for the nearly 400-year-old denomination as it divides over LGBTQ ordination and same-sex marriage. The convention also adopted regulations for churches that have chosen to leave the RCA to retain their assets and buildings.

The restructuring team and the regulations for exiting churches, recommended in a report to the convention called Vision 2020, passed by wide margins.

Saturday’s votes come after several conservative splinter groups have already broken off to form independent church networks, with other churches promising to follow. According to their website, one of the networks has already had more than 125 churches express interest in joining—a blow to a denomination with fewer than 1,000 churches.

The Vision 2020 team was initially formed after leaders at the 2018 General Synod recognized that the RCA was at an impasse. In 2016, General Synod passed an amendment to the Book of Church Order that defined marriage as between a woman and a man. However, the measure lacked the two-thirds approval of classes required to pass the amendment.

The restructuring team, to be composed of 10-15 individuals representative of the denomination, will consider reorganizing the RCA’s regional church groups by affinity rather than geography, allowing each group, called a classis, to associate according to its views. The new groups would retain their right to decide on ordination and marriage. The organization of General Synod and regional synods would also be reexamined.

Some delegates expressed concerns that reorganizing the denomination by affinity would create chaos. “Abandoning geography is going to create multiple problems,” said James Brownson, a professor at Western Theological Seminary, during the debate. “Does this mean that the RCA is going to reorganize every time there is a new divisive issue?”

Others saw the recommendation as the best way to resolve the RCA’s decades-long gridlock over LGBTQ issues. “I know there will be loss. But I’m in this for the long haul,” said Jonathan Garbison, a minister from the Classis of Wisconsin. “We have to be exploring new ways of working together, of worshiping together, of being on mission together.”

Delegates also approved recommendations for rules allowing those churches transferring to another denomination to retain their assets and buildings. Individual churches, however, will be responsible for any liabilities.

“We believe that the RCA has an opportunity in this moment to act in an exemplary way by providing a generous exit path for churches who decide to leave, and also by inviting these churches to act generously themselves,” said Brian Keepers, a Vision 2020 team member who presented the recommendation.

By a vote of 198 to 9, delegates strongly voted against a recommendation that would create an external global mission agency to house the RCA’s current global missions work. The intent of the proposal was to allow departing congregations to continue to support RCA missionaries. The debate reflected the delegates’ concerns about the logistical challenges of transferring the RCA Global Mission’s 33 endowments—worth $8.5 million—into a new nonprofit organization.

Before its conclusion on Tuesday, October 19, the General Synod will vote on a further proposal about the structure of regional synods, which oversee a group of classes. As it stands, Overture 10 proposes to reorganize existing regional synods into two new regional synods: one that would affirm a conservative view on LGBTQ ordination and same-sex marriage, and one that would not. Churches could then opt-in to one of the two synods.

The RCA’s history goes back to the Dutch settlement of New Amsterdam in the early 1600s. Today, member churches are often polarized, with some reflecting mainline sensibilities and others evangelical. The denomination’s divides over LGBTQ inclusion are based on members’ disparate interpretations of Scripture, with some advocating for what they call a “grace-filled” approach and others emphasizing the penalty of endorsing what they believe the Bible clearly calls sin.

Originally scheduled for debate in June 2020, the RCA has been waiting over a year to decide on the Vision 2020 Report. The delegates concluded Saturday’s plenary with a standing ovation for the Vision 2020 team. “This has been hard work,” said Keepers. “Again, there has been pain in it, but we believe in a God who is doing something new, and a God who is faithful.”