With believers unable to communicate, international advocates weigh in on how the Sudanese church—buoyed by recent religious freedom gains—considers the military seizure of power.
Jayson Casper|October 26, 2021 01:47 PM 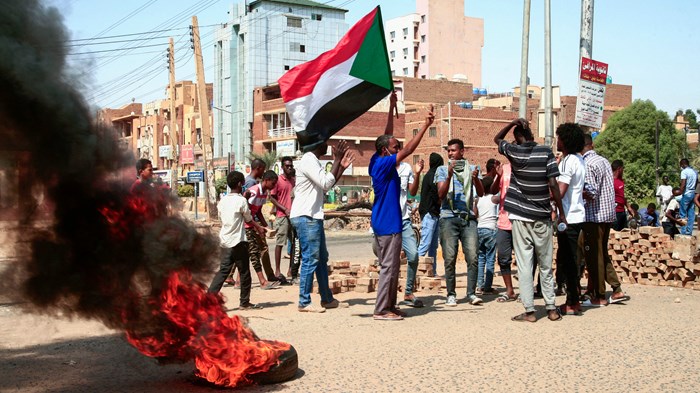 Image: AFP / Getty Images
Sudanese demonstrators lift national flags and burn tires in the capital Khartoum on October 26, 2021, as they protest a military coup that overthrew the transition to civilian rule.

Amid a near complete phone and internet blackout, Sudan’s Christians are on high alert following a military coup.

Hamdok, who called the arrests a “complete coup,” called for protests. The Forces of Freedom and Change alliance, which organized the original 2018 revolution that ousted 30-year dictator Omar al-Bashir, called for civil disobedience.

Thousands have filled the streets and were met with repression. Reports say 10 people have been killed and 80 injured.

CT spoke with an American ministry leader who was able to contact a Christian source in Sudan. The leader requested anonymity to preserve their ability to travel. The source was very careful in communication.

“All I can really say is that it is very important to pray for peace and security for all in Sudan,” said the leader, “and that the voice of the people would be heard.”

“The international community should put their pressure on the junta to value the life of their citizens,” Yunan Tombe Trille, president of the Sudan Catholic Bishops’ Conference, told ACI Africa, “[and] to hand back the power to civil government.”

The military eventually supported the revolutionary movement and in July 2019 agreed to share power within the Sovereign Council. The arrangement: The initial 21 months would be led by a military figure, then 18 months of civilian leadership, followed by elections.

Peace deals with rebels in Darfur and the Nuba Mountains reset the timetable to integrate former fighters into the official military and governance structures. The new date for civilian transfer was not specified. Some reports said it was due next month.

Last month, an attempted coup was put down. Tension has since characterized the military-civilian relationship, as economic gains have been slow to materialize.

Other tensions pertain to seeking military reform and oversight, surrendering Bashir to the International Criminal Court, and releasing the results of an investigation into the June 2019 massacre of demonstrators allegedly committed by current members of the Sovereign Council.

Over the last two weeks, pro-military and pro-civilian demonstrators have organized rallies.

A US envoy visited Sudan to warn about leaving the path toward democracy. The coup took place a few hours after his departure. The Biden administration immediately paused $700 million in emergency economic aid. USAID stated humanitarian assistance would continue, of which $386 million had already been disbursed this year.

Burhan suspended the transitional constitution, pledged a technocratic government, and said the military will remain in charge until elections in July 2023. Reports said Central Bank employees have gone on strike, while medical personnel have refused to work at military hospitals.

Sudan’s civilian government had won international praise for its promotion of religious freedom, removing Islam as the state religion, dropping the death penalty for apostasy, and even letting Christians march for Jesus in the capital. Sudanese Christians were greatly encouraged as changes moved their government away from the discriminatory practices of Bashir’s regime.

“Who is behind this move?” reported Agenzia Fides, the Vatican’s news service, quoting an anonymous Sudanese Christian source. “Are they Islamists? A more secular branch?”

The source said there was “great uncertainty and fear.” But sympathies were with Hamdok and the civilian leadership.

“They are good people … who [paid] for their loyalty to the people,” the source told Fides. “They [the military] say they did it to save the revolution but it is an act that definitively buries it.”

Reports said that just prior to the coup, the military asked Hamdok to join in executive leadership. This was not received well.

“The officers want power without losing face,” the source told Fides, “as if people were stupid and not already aware of the maneuvers.”

The arrested include the governor of Khartoum and the spokesman of the Sovereign Council. Sacked along with the others is the minister of religious affairs who had invited Texas pastor Bob Roberts to lead a religious freedom delegation planned for next week.

“How will religious minorities be treated?” said Roberts, global senior pastor at Northwood Church and cofounder of the Multi-Faith Neighbors Network. “It is too early to tell, but they have a right to be concerned.”

The multifaith group expressed hope for the preservation of religious freedom.

With worry, so did Christian advocacy organizations.

“A window of opportunity towards religious freedom in Sudan could be about to close,” stated Paul Robinson, CEO of Release International. “We need only glance back a few years to Sudan under a hard-line Islamist government, to be genuinely concerned about what Sudan could be like again.”

In 2017, his associate Petr Jasek was jailed for investigating church destruction. Robinson called for Sudan to protect both civil and religious rights. “Please pray that those most basic freedoms—to choose who will rule their country and to decide for themselves which faith they wish to follow—will be upheld in Sudan.”

Christian Solidarity Worldwide (CSW) called for action. “Steps should be taken to ensure that protestors are able to exercise their rights peacefully,” stated president Mervyn Thomas, “and that financial and other punitive measures are imposed on the military until a civilian administration is restored.”

However, Scott Gration, the former Obama-era US special envoy to Sudan, warns against too harsh a reaction. “There is a military legacy that is wise to consider,” he said. “We have to get back to the arrangement of cooperation, despite the feeling to punish the generals.”

The international community must come down hard to reverse the arrests, he said. But civil democracy will be better rooted if the military is a partner in a methodical transition. A son of former missionaries to the Congo, Gration said much more needed to be done to ensure economic success.

When Sudan agreed to normalization with Israel last October, it solidified Washington’s intention to remove the nation from the US list of state supporters of terrorism. But while progress has been made on debt relief, the international community has been slow with foreign investments.

Furthermore, the accord with Israel sharpened lines between religious groups in Sudan. Minorities may have been caught in the middle.

“If Islamist or conservative elements of the military take over,” Gration said, “it will really scare many Christians.”

An unnamed Sudanese diplomat told the Israeli press that the takeover would not dramatically affect the normalization process. It might even advance, he said, as the military can lend stronger support than nervous civilian politicians.

If true, it might align well with larger geopolitical interests.

Reports have said that Egypt has been nurturing its relationship with Sudan’s formal military, while Saudi Arabia and the United Arab Emirates have allied with the Darfur-based Rapid Support Forces, whose commander is also on the Sovereign Council.

Eric Patterson, executive vice president of the Religious Freedom Institute, called them out specifically. “It is important that the international community, especially Arab states and neighbors such as Egypt, actively condemn this coup,” he said.

So far, their response has been tepid. Egypt and Saudi Arabia called for “restraint,” with vague statements to preserve gains and protect unity. The Arab League was stronger, asking all to “fully abide” by the transitional constitution.

But even with that constitution, said retired missionary John Ashworth, many Christians and other religious minorities remained “cautious” about the new dispensation.

“While they were of course happy to see the end of Bashir,” said the longtime Sudan analyst, the experience of Sudanese Christians under every Khartoum regime since independence—civilian or military, democratic or dictatorship, Islamist or simply Islamic—has been of oppression, marginalization, and discrimination.

“They have good reason to wait and see before endorsing any new regime,” said Ashworth.

Whether under Burhan or Hamdok, Sudanese Christians have a biblical mandate to be the people of God under any circumstances, Trille told ACI Africa. The Catholic bishop appears pessimistic that the situation remains the same.

“The church in Sudan has (never) remained silent under the Cross of Christ, despite some changes which took place in Sudan,” he said. “The attitude of the rulers towards the church has never changed.”