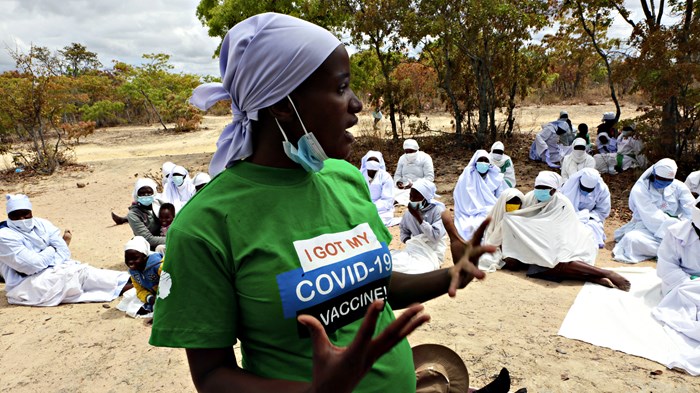 Image: Tsvangirayi Mukwazhi / AP Photo
Yvonne Banda stands in front of an Apostolic Church congregation on the outskirts of Harare, the capital of Zimbabwe, on September 10, 2021.

Yvonne Binda stands in front of the congregation, all dressed in pristine white robes, and tells them not to believe what they’ve heard about COVID-19 vaccines.

“The vaccine is not linked to Satanism,” she says. The worshipers, members of a Christian Apostolic church in Zimbabwe, are unmoved. But when Binda, a vaccine campaigner and member of an Apostolic church herself, promises them soap, buckets, and masks, there are enthusiastic shouts of “Amen!”

Apostolic groups that infuse traditional beliefs into Pentecostal doctrine are among the most skeptical in the southern African nation when it comes to COVID-19 vaccines, with an already strong mistrust of modern medicine. Many followers put faith in prayer, holy water, and anointed stones to ward off disease or cure illnesses.

The worshipers Binda addressed in the rural area of Seke sang about being protected by the Holy Spirit, but have at least acknowledged soap and masks as a defense against the coronavirus. Binda is trying to convince them to also get vaccinated—and that’s a tough sell.

Congregation leader Kudzanayi Mudzoki had to work hard to persuade his flock just to stay and listen to Binda speak about vaccines.

“They usually run away,” he said. “Some would hide in the bushes.”

There has been little detailed research on Apostolic churches in Zimbabwe, but UNICEF studies estimate it is the largest religious denomination with around 2.5 million followers in a country of 15 million. The conservative groups adhere to a doctrine demanding that followers avoid medicines and medical care and instead seek healing through their faith.

Integrated into the Zimbabwe Heads of Christian Denominations (ZHCD) in 1993, the Apostolic churches cooperate alongside the Evangelical Fellowship of Zimbabwe (EFZ), the mainline Zimbabwe Council of Churches, and the Zimbabwe Catholic Bishops’ Conference.

“God has given us science and intelligence, in addition to divine intervention in healing,” EFZ president Never Muparutsa told CT. “People must not shun vaccines based on 666-style conspiracy theories.”

Tawanda Mukwenga, a Catholic, welcomed his vaccination as a means of allowing him to worship properly. At the cathedral in the capital, Harare, he recently attended his first in-person Sunday Mass in 10 months after the pandemic closed churches and forced services online. Zimbabwe has reopened places of worship, though worshipers must be vaccinated to enter.

“Getting vaccinated has turned out to be a smart idea,” said Mukwenga, delighted to celebrate Mass at the cathedral again.

More than 80 percent of Zimbabweans identify as Christian, according to the national statistics agency, but the contrast in attitudes displayed by the Seke Apostolic members and Mukwenga illustrates how there’s no one-size-fits-all solution to convincing hesitant religious citizens to get vaccinated.

While mandates—a blunt “no vaccine, no entrance” rule—is the way to go for some, there’s a subtler approach for the Apostolic and other anti-vaccine Pentecostal groups, partly, but not only, because they are deeply suspicious of vaccines in general.

Apostolic groups generally have no formal church premises and members—striking in the long white robes they wear to services—worship outdoors in open scrubland or hillsides, in locations widely spread across the country. 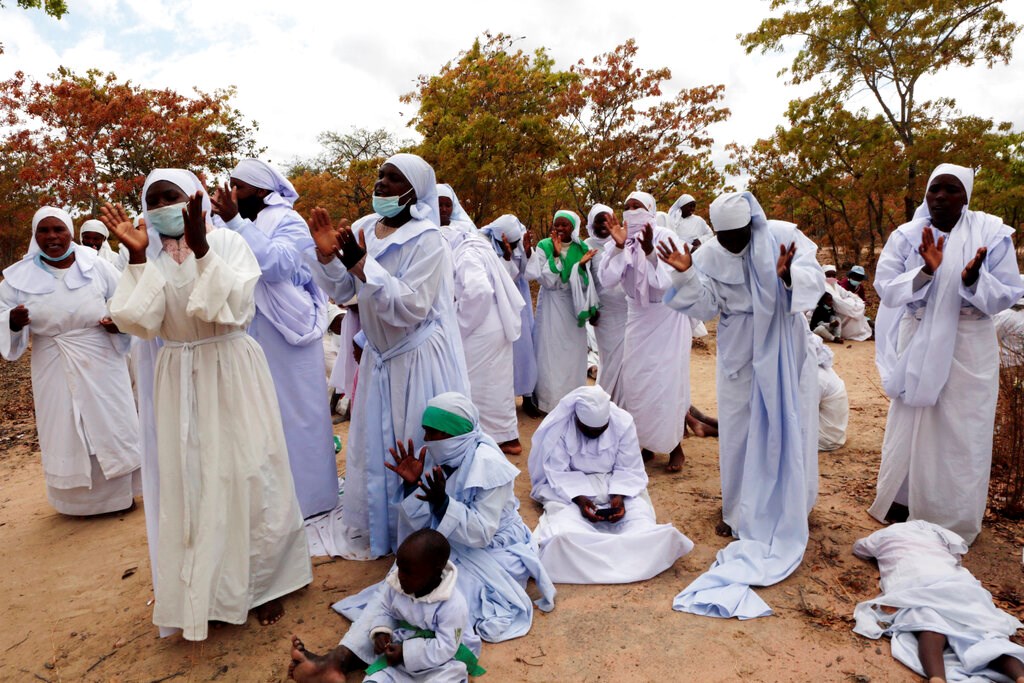 Members of an Apostolic Christian Church group gather for a prayer meeting on the outskirts of the capital Harare on September 10, 2021.

That makes gatherings much harder to police and health mandates almost impossible to enforce.

Binda is one of nearly 1,000 members of various religious groups recruited by the Zimbabwean government and UNICEF to try gently changing attitudes toward vaccines from within their own churches.

Muparutsa, however, is hesitant about this approach.

As vice president of the ZHCD, he estimates 30–40 percent of evangelical and mainline Christians are “skeptical” about the vaccine, and told CT it is not his place to take sides. He “encourages” Zimbabweans to do as he and his family have done—but will not “promote.”

Binda, however, is a vaccine evangelist.

“We have to cajole them,” she said of her fellow Apostolic churchgoers. “Bit by bit they finally accept.”

But it’s rarely a quick conversion.

“We are accepting that the Holy Spirit may not be enough to deal with the virus,” Seke Apostolic leader Mudzoki said. “We are seriously considering vaccines because others have done it. But our members have always been wary of injections.

“So for now we need soap, buckets, sanitizers, and masks,” he said. “Those are the things that will help protect us.”

Churches have taken steps to address hesitancy in other parts of Africa. The United Methodist Church, whose members in Africa and Asia nearly equal those in the United States, plans to use a mass messaging platform to send text messages to the cellphones of around 32,000 followers in Ivory Coast, Congo, Liberia and Nigeria. The initial aim is to dispel disinformation.

“There’s quite a bit of messaging centered around reaffirming for people that the vaccine is safe, that it’s been tested,” said Ashley Gish of United Methodist Communications. “The ingredients are safe for use in humans and will not make you magnetic—that was a huge one that we heard from a lot of people.”

Gish said her church plans to send out more than 650,000 messages with a “pro-vaccine bias.” But the program will roll out over a few months in a process of “COVID sensitization” and the church is not demanding followers get the vaccine immediately, she said.

While slow and steady might be best in dealing with some religious hesitancy, the situation is urgent in Africa, which has the world’s lowest vaccination rates. Zimbabwe has fully vaccinated 15 percent of its population, much better than many other African nations but still way behind the US and Europe.

So Binda and her fellow campaigners are adaptable if it means changing attitudes a little bit quicker.

One problem they’ve encountered is stigmatization. Some church members are willing to get vaccinated but don’t because they fear being ostracized by peers and leaders. The phenomenon led to campaigners advising the government not to bring mobile clinics to secluded Apostolic groups like the one in Seke, fearing that a public show of vaccinations would do more harm than good.

Alexander Chipfunde, an Apostolic member and vaccine campaigner who works alongside Binda, told the Seke congregants there was a way to avoid stigmatization.

“Go to the hospital, get vaccinated, and keep quiet about it,” he said to them. “It’s your secret.”

Members of an Apostolic Christian Church group gather for a prayer meeting on the outskirts of the capital Harare on September 10, 2021.
expand