Ahead of a UN climate summit, Catholic, Orthodox, and Anglican leaders jointly promote a “Season of Creation.”
Jayson Casper|September 16, 2021 06:00 AM
简体中文繁體中文 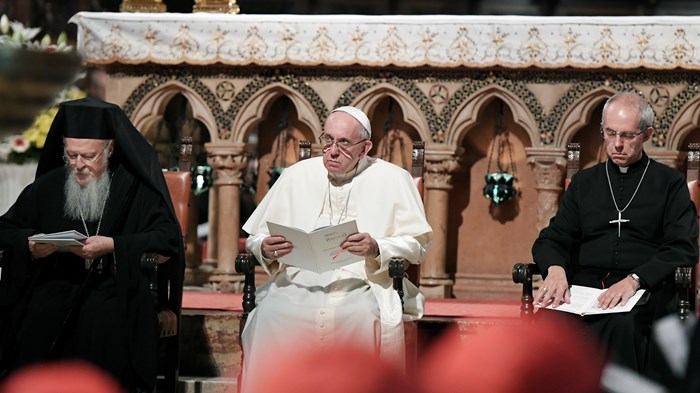 Image: Tiziana Fabi / Pool Photo via AP
In this 2016 file photo, Pope Francis flanked by Orthodox Patriarch of Constantinople Bartholomew I, left, and Canterbury Archbishop Justin Welby, pray together inside the Basilica of St. Francis, in Assisi, Italy.

In their first joint statement ever, the spiritual leaders of Christianity’s three largest denominations addressed the United Nations.

“Listen to the cry of the earth, pledging meaningful sacrifices,” stated their appeal. “We must decide what kind of world we want to leave to future generations.”

Pope Francis of the Roman Catholic Church; Bartholomew I, ecumenical patriarch of the Eastern Orthodox Church; and Justin Welby, the evangelical Anglican archbishop of Canterbury, issued their plea this month to delegates attending next month’s UN climate summit in Scotland.

Noting that life on “the earth which God has given” has become an “urgent matter of survival,” the three leaders framed inaction as a severe injustice.

“The people bearing the most catastrophic consequences of these abuses are the poorest on the planet,” they stated, “and have been the least responsible for causing them.”

“The environmental crisis represents the greatest challenge humanity has ever faced,” said Ed Brown, LWCCN co-catalyst for creation care, “and is a monumental failure to obey the clear command of Scripture to care for God’s creation.”

Francis, Bartholomew, and Welby urged corporations to seek “people-centered profits.” They called on nations to “stop competing for resources, and start collaborating.”

But they also called on Christians to pray, celebrating this “Season of Creation.”

In 1989, then Ecumenical Patriarch Dimitrios I declared September 1 as a day of prayer for creation. In partnership with the World Council of Churches (WCC), the day became a season, extended to October 4. And in 2015, the same year Francis issued the landmark environmental encyclical Laudato Si (Praised Be), the Catholic church embraced the initiative.

Brown served on the Season of Creation advisory committee until last year.

“Doctrinal unity is not necessary to join hands when facing a common threat, he said. “But cooperation opens up opportunities to share why we are working to save God’s creation: because we love him, and we care for the poor, both of which are hallmarks of historical evangelical Christianity.”

“Our motivation is clear: Collaboration around an issue that is global, urgent, and unites us,” said Dave Bookless, LWCCN co-catalyst, “but without compromising our biblical and Christ-centered basis.”

An Anglican priest in the United Kingdom and director of theology for A Rocha International, a Christian conservation organization, Bookless assumed the advisory committee duties from Brown.

Responsible for preparing the scriptural reflections for the Season of Creation, he ensured their biblical foundation. And in the run-up to the UN climate summit, churches in the UK launched “Climate Sunday” to be celebrated within the summit’s five-week duration.

Tearfund prepared a conversation guide. World Vision offered a sermon on trees. The UK’s Methodist Church and Catholic Bishops Conference are sponsoring partners. Over 1,600 congregations have registered so far.

“Our experience with both Lausanne and WEA has been really supportive,” he said. “And the media stereotype of US evangelicals does not reflect the global picture at all.”

In 2012, the WEA launched its Creation Care Task Force, and two years later joined with Lausanne to create the LWCCN. But its climate ambassador, Katherine Hayhoe, appointed in 2020, finds the American response to be lacking.

Only one-third of US evangelicals support her, she tweeted, referring to a 2015 Pew Research study.

“I don’t accept global warming on faith: I crunch the data, I analyze the models,” she said. “The data tells us the planet is warming, [and] the science is clear that humans are responsible.”

Brown notes the National Association of Evangelicals in the US has emphasized creation care. And Bookless says that there is no reason the WEA couldn’t have been included in the Catholic-Orthodox-Anglican joint statement.

“So far it has been a personal initiative between leaders,” he said. “But I guess it could grow beyond them.”