The Brooklyn congregation and its pastor A.R. Bernard hope the Jane Jacobs–inspired urban village will be a model for other cities.
Emily Belz in New York|August 9, 2022 01:00 PM 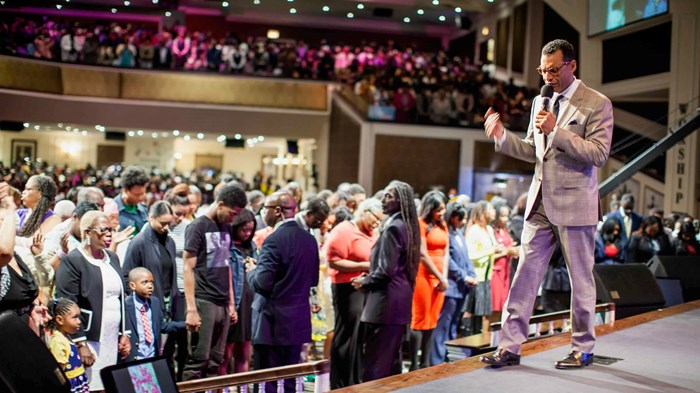 A. R. Bernard, pastor of the largest evangelical church in New York City, has been working on a plan for more than 10 years. Now the proposal to build a $1.2 billion urban village and revitalize the struggling neighborhood around his church is progressing through the city’s approval process and closer to reality. The Christian Cultural Center (CCC) hopes developers could break ground in Brooklyn next year.

“If I’ve got land, and it’s valuable, I’m going to leverage that land to partner in its future, not surrender it. … What can we do to better the quality of life?” Bernard told CT in early August as he paged through the proposals for the urban village. “My theology is summed up in two words: human flourishing. That’s the story from Genesis to Revelation.”

Bernard had just returned from an event with the New York governor in Buffalo and was planning a trip to participate in the coronation of the new Zulu king in South Africa.

But back in his office without any staff or audience around, he was diving into the minutiae of land development, showing slideshows of proposals for different heights of buildings and talking about the design for “porosity” of streets and ULURP, the city ’s land use process.

On 10.5 acres of church land, the proposed village would include thousands of units of affordable housing, a trade school, a supermarket, a performing arts center, 24/7 childcare for night-shift workers, senior living facilities, and other amenities designed to revitalize the East New York neighborhood.

As the founder of the 30,000-member nondenominational church, Bernard is also a kind of unofficial mayor of the city’s evangelical churches. He has served as the head of the Council of Churches of the City of New York and is often the person public officials call when they want an evangelical advisor or representative at significant events. He also works in evangelical organizations outside the city, including serving on the board of Promise Keepers.

“I’m a big Jane Jacobs fan, when it comes to understanding the urban landscape. And community means amenities are within a 1,000-foot walking distance,” Bernard said, referring to the urban planner who is famous for saving lower Manhattan from a highway and for her ideas on smaller-scale urban development focused on street life. “She was a genius. Absolute genius.” He sees this plan as a counter to the influence of the infamous urban planner and Jacobs nemesis Robert Moses, who had a history of dividing communities economically, including in this part of Brooklyn.

“When you have lights, activity, shopkeepers, people, you have eyes on the street,” he said. “So there’s less of a need for strong policing, because you have so many eyes, and so many stakeholders. That’s what community is about.”

The church hopes this village can be a model for other cities and it could be scaled up or down, Bernard thinks. But he added that a church must be large enough, like CCC, to pull such a plan off.

Black churches in other cities like Atlanta have recently undertaken big development projects to build affordable housing. In Buffalo, New York, churches are partnering at a smaller scale in a nonprofit called Buffalo ’s Black Billion to begin revitalizing the East Side.

This massive project in Brooklyn goes against the trend in New York real estate. New York churches, facing overwhelming maintenance or renovation costs of their aging real estate, have been selling to developers. And more recently, the trend among city churches has been to make deals with developers to allow construction of luxury condos on their land if the developer also builds a space for the church. Those deals have sometimes turned sour.

Even when such deals work out, they can exacerbate the housing problem for the less wealthy in the city. New York City neighborhoods are experiencing record rents this summer.

In the CCC’s neighborhood, 33 percent of households are severely rent burdened as of 2019, meaning they spend more than 50 percent of their income on rent. The homeownership rate was also lower than the rest of the city.

The project is about preventing gentrification, but this area of East New York is one of the farthest flung neighborhoods in the city, and a mile from the end of a subway line. For now it is more about revitalizing the area for residents.

Tony Carnes, who has documented the histories and stories of New York houses of worship with his project A Journey Through NYC Religions, said the CCC’s project is “perhaps unprecedented [in] size and scope for one congregation to undertake.”

Other nearby churches have embarked on affordable housing projects. Another big congregation in the city, Allen Cathedral, has a community development corporation that has built affordable housing and senior residences. A group of Brooklyn churches has also donated to construct housing with the help of city funding, an initiative called the Nehemiah Program. The largest provider of affordable housing in Harlem has been Abyssinian Development Corp., which started through a Harlem church. That organization has struggled financially and sold off properties in recent years, with accusations of financial mismanagement.

Most of those projects happened decades ago. For the most part, churches just aren ’t building in New York.

Bernard is hoping to avoid a financial spiral in this project. Before he was a pastor, he worked in banking and served on the city ’s Economic Development Corporation Board during the Bloomberg and de Blasio administrations. He wants a development that attracts enough money to keep the property desirable, and quotes Luke 14:28: “Suppose one of you wants to build a tower. Won’t you first sit down and estimate the cost to see if you have enough money to complete it?”

“We can build affordable housing that can’t sustain quality of life,” he said. “Then it’s a downward trend, which means now we have to turn government funding, and we simply replicate the problems with [public housing].”

CCC purchased a supermarket in the late 1980s for its church, and it soon outgrew the space as membership approached 11,000 in the 1990s. The church bought 6 acres at its current site, and then another 4, and built its current building in the late 1990s. Over the years, Bernard said, he has been approached by developers about the land, and he even refused what he described as a bribe over a proposed affordable housing project he said was not affordable.

“There are too many stories of developers exploiting the communities, and especially churches,” said Bernard, whose church has been in Brooklyn since 1978.

Outside his office and just beyond the church building, school buses pulled in and out of the massive parking lot that will be the grounds for the village. The church rents the space to a transportation company now.

If the project makes it through the labyrinth of city approvals—borough president, land use, city planning, and then city council—the organizers hope to break ground in spring of next year.

Bernard is hopeful that his longevity in the community can help move the project to reality, since local neighborhoods often object to outside developers coming in. The church is in a 50-50 relationship with a developer for the project, according to Bernard.

The plans for the village are born out of specific situations the church has seen in the community.

In the early 2000s, one woman appealed to the church for help after a horrible incident: She had to work a night shift at McDonald ’s and her babysitter canceled. She decided to leave her two children at home overnight, but someone set the home on fire that night. The two children died, and she faced charges for child endangerment. CCC did the children ’s funerals and advocated for her with prosecutors, according to Bernard, and prosecutors eventually dropped the charges. Night-shift workers, Bernard said, need childcare, so they are working on having a 24/7 childcare center in the village.

The trade school plans also are a response to a community that is still dealing with the effects of the 1994 federal crime bill, which is often blamed for mass incarceration. As millions of men come out of prison and try to reenter communities, he said, the trade school can help them establish themselves.

Bernard also sees the next decade as a time of intense social upheaval and said in such moments in history, “always the poor are the most impacted,” so the village can be an oasis.

“Church is a generational service, birth to death,” he said. “How can we make a difference using the land that’s available to us?”