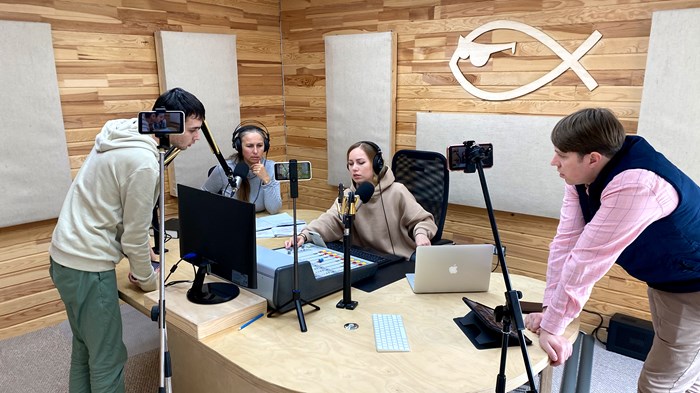 A new language law in Ukraine has complicated ministry to Russian-speaking citizens. Comparing restrictions to the Soviet era, one Christian broadcaster is relocating to Budapest, Hungary.

“I don’t want our staff busted on the air for reading the Bible in Russian,” said Dan Johnson, president of Christian Radio for Russia, which operates New Life Radio (NLR) from Odessa on Ukraine’s Black Sea coast. “We were expecting bombs to wreck our radio operations, but it turned out to be this law.”

Last month, Russian missiles landed one mile from their studio.

But earlier in July, President Volodymyr Zelensky signed into law a near-complete ban on Russian music on radio and television. Passed by parliament with a two-thirds majority, it exempts pre-independence classical artists like Tchaikovsky and Shostakovich as well as modern composers who have condemned the war.

About 65 percent of NLR airtime is music. Though local Christian anthems have inspired many during the war, Johnson said most contemporary worship songs are in Russian, even those originating from Ukraine.

A 2021 national survey identified 22 percent of the Ukrainian population as native Russian speakers, with 36 percent speaking the language primarily at home. Concentrated in the eastern Donbas and southern regions where Russian troops have prioritized attack, there are fears that Moscow is preparing to annex certain occupied areas.

Johnson has fled restrictions before. He moved to Russia in 1991 and by 1996 began radio ministry in Magadan, a featured city in Aleksandr Solzhenitsyn’s The Gulag Archipelago. Kicked out in 2006, he continued ongoing satellite-based radio work in Moscow, broadcasting throughout the former Soviet Union. But as the campaign against both free press and evangelical ministry tightened, in 2019 he relocated again.

“There isn’t a government in the world that can stop the gospel,” Johnson said. “We will pivot and move on as always.”

NLR rents its studios and broadcasts by satellite and online, simplifying operations. Budapest was chosen because of its sizable Russian Christian population, Johnson said, which welcomed the ministry.

In the meanwhile, NLR continues to produce content in Russian, encrypting the signal to broadcast from outside the country. This should satisfy the law, he said, while also raising funds to build a Ukrainian language–only network in Odessa. In time, as a to-be Ukrainian broadcaster, he hopes to secure an FM license, alongside satellite and internet radio.

“I hope the authorities will leave us alone,” he said.

“I believe in freedom of speech,” he said, “but this is a state of war.”

A native Russian speaker himself, an aspect of Rakhuba’s ministry has witnessed increased scrutiny due the new law’s additional ban on books from Russia, Belarus, and Ukraine’s occupied territories. It also restricts imports of Russian-language literature from other nations.

Officials took note of Bibles and translations of children’s devotional Keys for Kids in a shipment from Poland to be delivered to Donbas. Identified clearly as Christian material, they let it pass with the local pastor’s signature of receipt.

Mission Eurasia is still welcome to print Russian material, Rakhuba said, but there is very little demand. Churches are voluntarily switching their sermons to Ukrainian, he said, while the Pentecostal union officially dropped the Russian language in all its services.

“The government is doing everything possible to limit Russian propaganda,” Rakhuba said, “but the people also want to demonstrate their loyalty.”

Many are eager, even as they are struggling to speak the language, said Victor Akhterov, senior coordinator for Eurasia for FEBC (Far East Broadcasting Company). Before the invasion, the global Christian radio network—which broadcasts from 149 stations in 50 countries—operated seven FM stations in Ukraine, all of which were in majority Russian-speaking areas—and added Zaporizhzhia in April and Kyiv earlier this month.

Two have shut down because of the war.

Guest participants on the stations will often give a greeting in Ukrainian before asking if they can continue in Russian. But the primary broadcast language has changed over time, mirroring national policy.

“We anticipated the government response [to the 2014 separatist movement in Donbas],” said Akhterov, “and tried to adjust as we followed the trends.”

Founded in 1945 with an emphasis on China, FEBC began broadcasting to Ukraine in 1949 and on local networks in 1993. Twenty years later, it opened its first station in the Donbas city of Sloviansk, which was captured by Russian-backed rebel forces in 2014.

Four of its volunteers were executed.

At that time, the local FEBC broadcast had a Russian-language orientation with 20 percent of content in Ukrainian, designed to increase over time. Before the Russian invasion, content reached about 75 percent Ukrainian. Callers, Akhterov said, can speak whatever language they want.

It is the same for citizens—though the public square has shifted.

In 2012, Ukraine gave minority languages official regional status for use in courts, schools, and other government institutions in areas where usage reached a 10 percent threshold.

But in 2015, Russian was ordered removed from all railroads and airports, and in 2016 the first quotas were established for Ukrainian songs on the radio. It was in this period that FEBC made the “strategic decision” to switch primarily into Ukrainian.

By 2019, the 2012 law was replaced altogether to now require the use of Ukrainian in nearly all aspects of public life, while media outlets must include Ukrainian versions alongside minority languages. Exceptions were allowed for several ethnic communities, English, and other European languages.

But there is no “ugly push” away from the language, Akhterov said. When the government consolidated national TV channels last March, it continued to broadcast news content in Russian. People remain free to speak the language, he said, and thousands of Russian-speaking Ukrainian patriots are fighting to resist the invasion.

And many are changing their primary tongue.

From the Luhansk region of the Donbas, Rakhuba’s nephew once campaigned to preserve the Russian language against Ukrainian policy changes. Last week, the Mission Eurasia leader was surprised to receive his relative’s letter written in “pure Ukrainian.”

“I don’t blame my family for switching,” Rakhuba said. “Russian is now experienced as the language of the invader.”

Akhterov said that for many, it is now “painful” to speak their native tongue.

“All my life I spoke and read Russian; I authored articles and books in Russian; I preached in Russian,” said Sergey Nakul, FEBC’s senior broadcaster in Kyiv. “Today, I can’t. I switched to Ukrainian completely.”

There is thus no regret for on-air changes—especially as Russian-speaking citizens are still being reached. Affiliated ministry continues in Russia online and over social media, reaching three million Ukrainians every month.

FEBC has a longstanding policy to refrain from politics, Akhterov said. But as they interact with grieving listeners, broadcast interactions show them clearly on the side of the Ukrainian people.

In Russia it is more difficult. Licenses for FM stations in Moscow and St. Petersburg were not renewed in 2016, accelerating the transition to internet ministry. And today, FEBC-affiliated workers are not talking publicly about their wartime challenges. Their goal is to preserve an audience of several million people—and their gospel opportunities.

“We all understand Russia is living under a dark cloud of lies,” Akhterov said. “But we are not doing anti-propaganda; we are proclaiming the light of Christ.”

For Johnson, the mixed-language NLR staff is in a “quandary.”

“How would you feel about a government that discriminates against your language?” he said. “People in both countries are looking at us to see where our allegiances lie.”

Neutral on air, privately they are united against Putin and the evil perpetrated by the war. Criticism was received early on as they emphasized their peacemaking allegiance to the kingdom of God, he said, but the stance helped foster a sense of unity among listeners. During the daily one-hour call-in show, Ukrainian and Russian speakers would request hymns from their respective languages and warmly greet each other as family.

“We strive to promote this spirit the other 23 hours of the day,” Johnson said.

But the religious battle continues between the two nations.

The independent Orthodox Church of Ukraine has asked Ecumenical Patriarch Bartholomew I to remove Russian Orthodox Patriarch Kirill from his position. The Ukrainian Baptist Union has called on its Russian colleagues to be a “prophetic voice” on their behalf, as they lamented the loss of 400 war-torn churches.

But neither are the Russians idle. Last month, the nation’s security council passed resolutions against the “negative influence” of foreign religious associations. And on August 15, several members of the New Generation movement of churches were arrested; one year earlier the sect was declared “undesirable.”

Johnson fears Ukraine’s wartime policies are veering in a similar direction in terms of language—not faith. Akhterov disagrees. And while NLR focuses on strengthening the church in its Slavic niche, the larger FEBC considers itself a missionary enterprise to unbelievers.

But as each continues its ministry in a time of war and suffering, both efforts are centered on the Bible.

“We let the scriptures explain themselves, and make a mark on the listener,” Johnson said. “Paul can make a better case for how to live as a Christian than any radio commentator.”