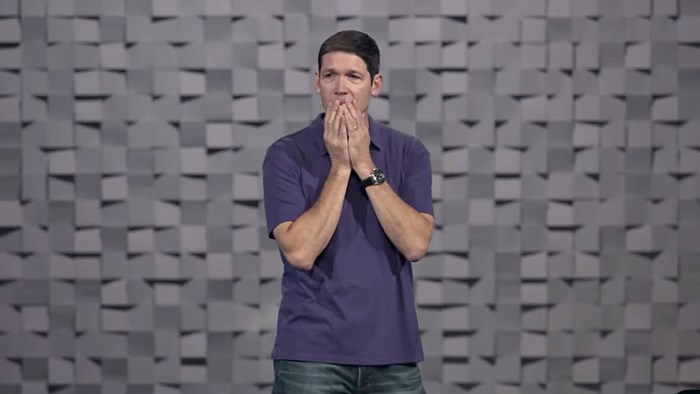 The Village Church pastor Matt Chandler announced on Sunday that he had an inappropriate online relationship with a woman and is taking an indefinite leave of absence from preaching and teaching.

The relationship was not sexual or romantic, Chandler told his church, but the elders believed the frequent and familiar direct messages exchanged over Instagram were “unguarded and unwise” and “revealed something unhealthy in me.” Chandler said he agreed with their assessment and was grateful for the spiritual oversight.

“We cannot be a church where anyone is above the Scriptures and above the high heavenly call into Christ Jesus,” Chandler said. “The Word of God holds me to a certain standard. And I fell short.”

The Village Church is a large and influential Southern Baptist congregation in the Dallas-Fort Worth area. Chandler, 48, has been pastor since 2002 and president of the church-planting network Acts 29 since 2012, when he replaced Mark Driscoll, who was later deemed to be disqualified from leadership because of his personal character.

Chandler has said he and Acts 29 have learned over the years to better guard against narcissistic leaders, both by increased vetting before the pastors sent out to plant a church and by increasing accountability in ministry. In January, he told CT that pastors need to be “in the kind of community [where] they might be encouraged or challenged if you start getting red flags.”

For Chandler, the red flag came “several months ago” when a woman approached him in the foyer of The Village Church with concerns about how he was communicating with a friend of hers, Chandler said. He told the congregation he didn’t think he’d done anything wrong, and the DMing was not a secret. His wife knew. The woman’s husband knew. And yet the woman who approached Chandler did not think the online exchanges were appropriate.

Chandler, who has been critical of social media’s impact on pastors, has 134,000 followers on Instagram and posts a few times a month. His last post was a week ago. Chandler hasn’t posted on Twitter in over a year.

According to Chandler, he found the confrontation “disorienting” and immediately informed another senior pastor and an elder at the church. They reviewed the DMs and decided they were concerning.

The church said in an online statement that it also hired a law firm to review Chandler’s use of social media, including direct messages, as well as his phone texts and emails. The firm, which has not been named, concluded that Chandler violated the church’s social media use policy.

“It was that our conversations were unguarded and unwise. And because I don’t ever want there to be any secrets between us, the concerns were really about frequency and familiarity,” Chandler said. “We believe in brother-sister relationships here. And yet there was a frequency that moved past that and there was a familiarity that played itself out in coarse and foolish joking. It’s unbefitting to someone in my position.”

According to Acts 29, Chandler was also asked to step aside from his responsibilities for the church-planting network. Day-to-day operations will be run by the executive director, Brian Howard.

Chandler grew emotional as he addressed the church on Sunday and paused to fight back tears. At one point someone in the congregation shouted, “We love you.”

He reiterated his agreement with the decision to place him on leave and thanked the elders for taking the allegations seriously. It would have been very easy for them to look the other way, Chandler said, and that would have been a betrayal of the core commitments of The Village Church.

Lead pastor Josh Patterson stood behind Chandler as he spoke and preached the morning’s sermon after Chandler left the stage. He told the congregation that “this has been a weighty thing.” He also said the public discipline of a lead pastor is an example of the mission of The Village Church.

Patterson thanked the woman who confronted Chandler for her courage and conviction.

This story has been updated with information about an independent investigation and Chandler’s leave from Acts 29.