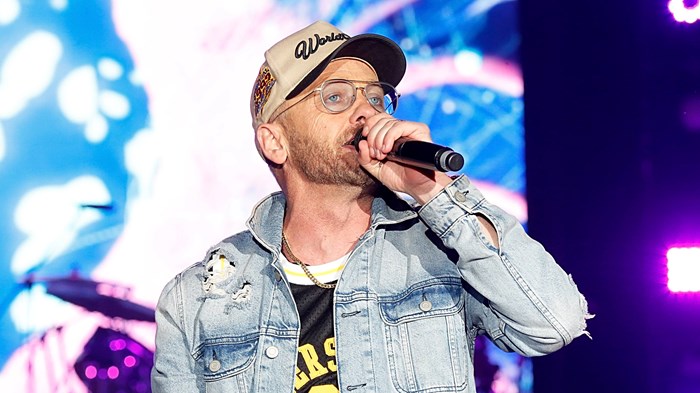 Since Truett McKeehan, an aspiring rapper, died at age 21 in 2019 after an accidental drug overdose, his father, the Grammy-winning Christian artist TobyMac (also known as Toby McKeehan), has not produced much original music, releasing a few “lost” demos and a concert recording that included “21 Years,” a song mourning the loss of Truett.

Now, a new album reflecting the trajectory the songwriter has traveled in the almost three years since the death of his oldest son was released on Friday, a collaboration with Truett’s sister, Marlee, Sheryl Crow, and TobyMac’s former bandmates from DC Talk—the Christian rap trio formed at Liberty University that launched TobyMac’s career.

Life After Death is filled with songs of lament and sadness, as well as a mourning father’s declaration about the goodness of God.

“God has been kind enough to show me that there is life after death,” TobyMac told an intimate gathering of dozens of fans, staff, and donors at WGTS, a Christian music radio station in Rockville, Maryland, on the night before the album’s release. “It’s hard to even say because I almost at times don’t want life. I think I’m cheating somehow on my son. But somehow or another I’ve learned that God is good.”

But in an indication that the album’s title refers to those Truett left behind, TobyMac points to a song he performs with DC Talk veterans Michael Tait and Kevin Max.

“The second verse on that song is my favorite lyric on the record,” said TobyMac. “It says: ‘Would you step across a party line? Would you walk into my cold cell? Can you see me in a different light? Would you meet me at the well?’”

TobyMac, 57, who calls himself primarily a songwriter and a “follower of my King Jesus,” talked to Religion News Service about writing about his grief and his belief, whether future performances with DC Talk are possible, and how cornhole tournaments fuel his arena tours. The interview has been edited for length and clarity.

You have said you never thought you would be able to write another upbeat song after losing Truett, but the new album has more than one. How did you get to that point?

Yeah, I mean, it was a long process. I came out of Truett’s passing and wanted to write a tribute to him so I wrote “21 Years,” a really hard and sad song. But I wanted to honor him, so I pushed through and I wrote it. And I didn’t write for a while. I kind of laid it down, just too broken up.

And I thought, my daughter always sits at the piano and plays. Maybe I’ll ask her to write a song and then try singing something together. It ended up with a song called “Everything About You.”

I thought it would be maybe therapeutic. Maybe it would help both of us, put words to our grief, put words to the pain. Marlee’s never recorded anything or never really written a song with me. So it was just really nice to do that together, and I think it was good for us.

And then after three, four really hard sad songs I said I’ll never write another up-tempo, I’ll never write another joyful song. And then I read a Scripture in Isaiah—and it actually mentions this in the Psalms, too—where it says that God is rolling up his sleeves, and I just couldn’t get that imagery out of my mind. So I started writing this song “Help Is on the Way,” which was up-tempo but not joyful.

“Rolling up your sleeves” comes from The Message. Is that a Bible version that you go to often?

In a time in life where everything seems to be so polarizing, people want to divide with anything you say. I make sure people know: Look, I grew up reading King James Version. I moved to NIV (New International Version). I go back to NIV. I go to King James. I go to American Standard. I go to Message. I’m not standing on the Message as the version for me. That was one of the versions I read that verse in.

Those words were also in the song “The Goodness,” which you performed with Nigerian-born singer Blessing Offor.

It was months later, after “Help Is on the Way.” It just came up in my heart from my time in God’s word: There’s still the goodness in my life. Something happened from believing help is on the way to sort of feeling the goodness of God and even stepping out a little further in believing that God loved Truett and he loves me and somehow or another maybe this is good for him and for me, even though it doesn’t feel like it.

Years ago, you worked with Michael Tait and Kevin Max in DC Talk, and now with Sheryl Crow and your own family on this album. How have your feelings about collaboration shifted over the years?

I’ve always loved collaboration. My first career—I’ve had two—the first mountain I climbed with DC Talk. We did it together, three college roommates, locking arms and climbing a mountain together. We laughed together; we loved each other; we fought and argued and laughed some more. I always like to have three voices trading off on songs. It was part of this vocal arsenal, I would call it, and it makes you listen differently when a new voice comes in. I set out on this record to really collaborate, and I think some of that might have been in the back of my mind, maybe subconsciously knowing I needed some of my friends to help me get through this record.

Is collaborating with Michael Tait and Kevin Max likely to happen again, as DC Talk?

I would say that we’ve never, ever said it won’t happen. The thought of it happening would be exciting to me. Not something that I would shy away from.

The song that we sing (on the new TobyMac album) is actually called “Space.” And the song is about the space that comes between us in life. You are locked arm in arm and then you look up and you don’t even mean to, but you have a family, they have a family; you have a career, they have a career. And this space has sort of inevitably gotten between you. It wasn’t like, Oh, I don’t like that person. Sometimes space comes between us for that reason. Many times it’s just life takes over and you look up and what you thought was going to be an “Intermission,” which is what we called our last record, our greatest hits, ended up to be, well, this is where we are in life now.

Switching from music to sports: From a driveway to a cruise ship, you have played cornhole with family, friends, and fans. Could you please explain your attraction to this form of recreation?

(laughs) Well when you’re sitting around backstage in an arena, you can sit around or you can put your hands in something. I grew up more in athletics than I did in music. I grew up in an athletic family. Played college golf. Backstage there’s lots of things you can do. But we chose to do something competitive. It might be pingpong. It might be cornhole. Cornhole is a fun game because you can involve a lot of people. Backstage we usually have sets of boards back there, and we’re playing each other. Sometimes even between sets, we play a quick game.

There are YouTube videos out there of you playing “extreme” cornhole. How do you take it to that level?

(laughs) I don’t know that you can take it to an extreme level. But we go ultra-competitive with it. At least twice a tour we set up brackets and do a whole tournament. I’ve always believed that the real sign of a tour, if it’s done well, is the temperature backstage. If love is happening backstage and kindness, compassion, and cheering for each other versus being competitive is happening backstage, I can assure you it’s going to be a great tour onstage for the people.

Now that you’ve resumed after Truett’s death, are there more songs coming?

I don’t have any more right now. Usually, I take a little break after I finish a record. But I sang something into my voice memo yesterday that I think will end up a song. That’s how I do it: I live life, meet people, get inspired, live through some pain, sweat a little, get hurt or get lifted up, watch humanity, and write songs.