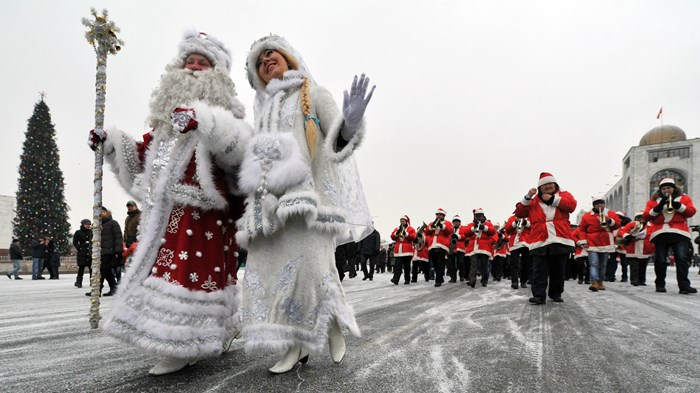 Kris Kringle should be in Kyrgyzstan.

If he is efficient, that is. The Central Asian nation, according to a 2007 study by Swedish consultants, is the geographic center best situated for his annual toy delivery campaign.

With Kyrgyzstan’s snowfall and freezing temperatures from November to April, Old Saint Nick would feel right at home in the mountainous peaks that raise the country’s average elevation to 9,000 feet. But whatever the religion of his army of elves, Father Christmas would have to adjust to Islamic customs in the valleys below.

Quick to seize on the marketing opportunity, the 90 percent Muslim-majority nation declared 2008 as “The Year of Santa Claus.”

There was eventual pushback—though seemingly confused in terms of the calendar. Frustrated with the non-Islamic revelry, in 2012 the Kyrgyz Muslims’ Religious Administration (KMRA) issued a fatwa forbidding New Year’s celebrations.

Not Christmas. Not even Xmas. The birth of Jesus remains an official holiday.

But it is observed on January 7, not December 25. Nearly half of the nation’s 7 percent Christian population is Russian Orthodox and follows the Eastern almanac. And since Kyrgyzstan’s independence in 1991, the government has honored its primary religious minority with few Muslim objections.

New Year’s Day celebrations on January 1, however, are a holdover from the Soviet era. The atheistic communists banned Christmas in 1917 but in 1935 reconstituted it as a secular holiday, celebrated one week earlier. No baby Jesus, but no Santa Claus either.

The Russians instead promoted a vague ethereal figure named Ded Moroz, which translates as “Grandfather Frost.” And they kept the trappings of tree decorations, gift giving, and family gatherings. With Islam suppressed as well as Christianity, over time the Muslim peoples of the USSR adjusted to the imposed culture.

After the collapse of the Soviet Union, Islamic authorities in Kyrgyzstan, Kazakhstan, Tajikistan, Turkmenistan, and Uzbekistan—as well as Azerbaijan on the western bank of the Caspian Sea—largely left New Year’s alone. Nominal Muslims shared in the festivities, including the sharia-forbidden consumption of alcohol.

It was Santa Claus that offended the KMRA—or rather, it was the modern, globalized excess of consumerism. Declaring the holiday un-Islamic, the administration asked the faithful to avoid celebrations altogether and instead give to the poor the substantial sums they would have spent on frivolities.

The fatwa found resonance, but not enough to dent the market.

“January 7 is the religious holiday, but the ‘real’ celebrations of Christmas come from the West,” said Ruslan Zagidulin, a lecturer in missiology at United Theological Seminary in the capital city of Bishkek. “But these have nothing to do with Jesus.”

Not that such celebrations are unwelcome. While there is no set custom for the meal, many families welcome the New Year with the national dish beshmarbek, a noodle soup with meat. Others enjoy boiled mutton or horse meat, served in dishes with sour cream or yogurt.

Following a speech by the president, fireworks go off in Bishkek’s Ala-Too Square—and on countless balconies across the country. Children await the visit of Ayaz Ata, the Kyrgyz name for Ded Moroz, and his beautiful granddaughter Snegurochka, known as Kar Kiz, meaning “Snow Maiden.”

But where the Soviets merged religious heritage into a secular New Year’s celebration, freedom unlinked them again. Faithful Orthodox will argue the superiorities of Santa Claus versus Grandfather Frost, but they are enamored instead with Saint Nicholas—a patron saint of ancient Rus.

Religious ethnic Russians attend church on January 7, which for most is simply a quiet day off. The nominal of both religions party on December 31, many until the early morning hours.

No matter. January 1 is a national holiday also.

“We thought we were saying goodbye to communism,” said Zagidulin. “But a secular culture is harder to change.”

In some Central Asian countries, Muslims are succeeding.

“We have few Muslim converts in our churches,” said Arman Arenbayev, presbytery chairman and pastor of Almagul Presbyterian Church, named after its district in Kazakhstan’s largest city, Almaty. “Because only the young profess Islam.”

His paradoxical answer belies the fact that of his nation’s estimated 150,000 evangelicals, half are Russian while the rest are of Muslim ethnicities. He himself is Kazakh-Tatar, but both of his parents were atheistic college professors. They followed him in faith a few years after his Campus Crusade-led college conversion.

Missionaries flooded Kazakhstan after the nation’s independence, and found fertile field—but so did Muslim revivalists promoting the faith of their fathers. Extremist preachers from Chechnya and Dagestan joined them from the troubled Russian republics, and Salafi influences from Saudi Arabia and Pakistan led a sizable minority to don long robes and grow long beards.

Today the mosques are full, Arenbayev said, but so are the malls. Shops and restaurants deck the halls with festive decorations, and fir trees line the streets awaiting customers. A recent poll found 17 percent of the population consider New Year’s to be a “foreign” celebration, while more than 70 percent could not imagine the season without it.

But Christmas, said the pastor, is considered a Russian holiday and Jesus a Russian god. There is no animosity, but village churches in the more Islamic south will celebrate quietly. Many churches there meet in homes, which is technically illegal.

Kazakhstan ranks No. 47 on the Open Doors’ World Watch List of the top 50 countries where it is most difficult to follow Jesus. But the situation is improving, Arenbayev said, as it is in many Central Asian nations. His country’s diplomatic efforts were even cited as a “proof of concept” for religious freedom advocacy with the United States.

So while the churches in the south gather for Christmas in homes, they still feel free to make it an evangelistic opportunity. Friends and relatives are invited, as everyone loves a holiday party.

In the north, it is more elaborate. Churches will have candlelight services and host a huge potluck dinner the evening of the 24th. A favorite food is plov, a beef and rice dish with carrots, cooked in cumin and oil. Served afterward, baursak (doughnuts) always please the kids.

The fare is similar in Azerbaijan, which adds the traditional dolma, crushed lamb mixed with mint and spices, wrapped in grape or cabbage leaves. Another preference is baliq, fish served with pomegranate sauce.

But for evangelicals—almost entirely of Muslim background—Christmas is an even bigger affair. This year the Vineyard church is renting a 400-person capacity hall, inviting people for weeks before.

“Pastor tells us to be ready to give up our seats as newcomers enter,” said Vadim Melnikov, a church elder. “Christmas is an opportunity to unite with Christians around the world and with Muslim neighbors who celebrate New Year’s.”

Nearly all of them do. In the early 1990s, there was a movement among some nationalists to ban the “Christian” holiday amid war with neighboring Armenia, an Orthodox nation. But despite the tensions, the government encouraged public celebrations as a marker of multiculturalism—and as a curb to Islamic extremism.

It is less pronounced—or celebrated—in the more conservative countryside, but there is still a tree in every central square, as smiling families take photographs with Saxta Baba, the Azeri name for Grandfather Frost.

Similarly motivated as Vineyard, Greater Grace church has hosted public caroling events since 1992 at the historic Lutheran Church of the Savior in Baku. Known locally as the Kirkha, the Gothic cathedral was converted into a concert hall by the Soviets. Today it hosts several Azeri congregations and only one predominantly German.

The Azerbaijan Bible Society estimates there are about 20,000 evangelicals in the country. Most are in smaller fellowships unable to match the outreach of others. But Melnikov said they will still host special services and invite the community. These will be repeated on January 7, to both honor the minority Russian Orthodox as a fellow family of faith and draw the nominal closer to Christ.

And the nominal are many—Christian, Sunni, or majority Shiite. Yolka parties on New Year’s Eve are as popular as in Central Asia, and while drunkenness is less pronounced, pork is renamed “wild boar” to soothe the consciences of consuming Muslims.

Most will have trees in their homes.

Traditionally, children will recite poems to Saxta Baba, but increasingly there is a question about its translation. All sources said they cannot differentiate between the Russian (Ded Moroz) and Western (Santa Claus) characters, but use of the latter name is growing.

“The days of Frost are ending,” said Melnikov, relating a common—but not yet dominant—sentiment. “The time of Santa is now.”

But is this good news—in terms of the gospel?

What good is a tree without a Nativity set? What value have lights with no heavenly host? “Silent Night” is everywhere, but played only in English.

They tend not to participate in the year-ending champaign toast, offering quiet witness against the alcoholism that plagues many Russian-world families. Even if December 25 is overlooked, they appreciate the national honor given to January 7. And as younger generations grow more aware of the Soviet manipulations of an ancient Middle Eastern birthday, they reference the culture as Paul did in Athens (Acts 17:16–34).

But for Zagidulin, also the Lausanne Movement codirector for Eurasia, there is an additional benefit for the region’s tiny evangelical community. They are not part of the landscape like the Russian Orthodox, nor are they Muslim like the indigenous ethnicities. Emerging from both, they might be suspect to all.

“The embrace of Western celebrations gives us a place in our nations,” he said. “A globalized Christmas helps us keep our identity.”