Ukraine Celebrates Christmas Twice. Now Its Orthodox Christians Can Too. 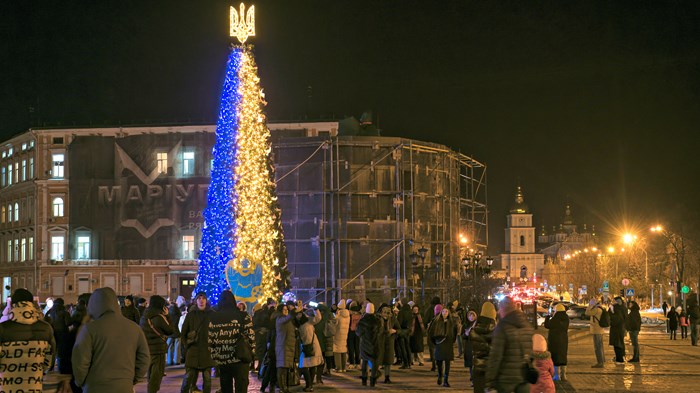 Thanks to Russia, Ukrainian Orthodox Christians may now partake in a Christmas feast on December 25.

The joyous, 12-dish celebration has been their timeless practice—on January 7, according to Eastern tradition. But this year, the Holy Synod of the Orthodox Church of Ukraine (OCU) has permitted its clergy to conduct religious services on the same date as Western tradition, granting a one-day exemption to the 40-day Nativity Fast.

Beginning after the feast day of St. Philip, observed by Ukrainian Orthodox on November 28, the faithful abstain from alcohol and most meat products until the first star appears on Christmas Eve, January 6. But with millions of refugees in Europe witnessing the revelry of fellow Christians in the West, the OCU decided to permit Ukrainians everywhere to decide parish by parish which date they would honor.

Liturgical reform has long been on the agenda, but war was the spark.

“For most bishops of the church, the calendar is not a dogmatic issue of faith,” said Archbishop Fedir, head of the youth department of the OCU. “Especially after the full-scale aggression of Russia, there is a desire to become part of the Western family of churches.”

Ukraine had already established December 25 as an additional official Christmas holiday in 2017, joining Belarus, Eritrea, Lebanon, and Moldova as nations that formally celebrate the birth of Christ twice.

But altering the calendar disrupts the entire church cycle. Saints’ days, sermons, and gospel readings are all impacted, with scholars engaged in response. The Holy Synod decision tasks priests with gauging the sentiment of parishioners and bishops with conducting follow-up research. Many believers love their traditions, Fedir said, and the hierarchy is wise to proceed cautiously.

The archbishop is responsible for the diocese of Poltava, 220 miles southeast of Kyiv, where one newly established congregation of young people has decided to switch from the Julian to the Gregorian calendar altogether, with his blessing. With blanket permission granted, he does not yet have a tally of how many parishes will join them—nor does the OCU’s Holy Synod.

But within her circle of Ukrainian friends, Nadiyka Gerbish finds none opposed.

“I expected it to happen and wanted it to happen long ago,” said the author of A Ukrainian Christmas, updated and rereleased last month. “They want a solid line between them and the Russian Orthodox Church [ROC].”

Gerbish, a member of Hosanna Evangelical Church in Zbarazh, a small town 250 miles west of Kyiv, condemned the support ROC patriarch Kirill has given to the invasion. And religiously, she sees the decision as part of a long-standing battle over jurisdiction between Moscow and Constantinople.

In 2019, Ecumenical Patriarch Bartholomew I of Constantinople issued a tomos of autocephaly (independence) to the OCU. The Ukrainian Orthodox Church (UOC) remains canonically linked to the Moscow patriarchate, though it has condemned Russia and Kirill since the invasion.

But culturally, Gerbish stated, it is very important for her nation to lean westward, joining NATO and the European Union.

“Every decision we take as a country should be in this direction,” she said. “Church is about religion, but in Ukraine it is also about politics.”

Even so, she expects most people will still celebrate Christmas on January 7.

Young professionals like herself do not care about calendars, but the holiday is about family. Parents and grandparents in the villages will host the Sviata Vecheria (Holy Supper) 12-course feast—honoring the 12 apostles—highlighted by kutia (wheat berry pudding) and uzvar (a spiced fruit and berry drink). Mushroom soup, pickled herring, and half-moon-shaped dumplings are other favorites.

According to a recent survey, they are not alone: 71 percent plan to celebrate on January 7, compared to 4 percent on December 25. Nearly three out of five Ukrainians oppose the license given by the Holy Synod.

“We don’t want to force anyone,” stated OCU archbishop Yevstratiy Zoria. “We understand that doesn’t resolve anything.”

Some in the older UOC have been critical.

“One gets the impression that [this] absurd decision,” stated Archbishop Viktor, responsible for Odessa, “was written by illiterate people who have no idea … about the worship of the Orthodox Church.”

Metropolitan Luke of Zaporizhzhia called it a step toward Catholicism.

Fedir stated that while some Catholic and Protestant churches in Ukraine also celebrate Christmas according to the Eastern calendar, discussions between them can promote essential ecumenical unity. And for young Ukrainians especially, it is “not convenient” to fast on New Year’s Eve if they want to “live a pious life.”

But this “first step” is essential—and prompted by Ukraine’s northern neighbor.

“If we want to survive as a nation, we have to break from Russia,” said Fedir. “Not only politically and physically, but spiritually.”

Through the ROC’s connections to the UOC, the identity of Ukraine has been suppressed, Fedir said. And he claims Kirill’s Moscow patriarchate bears little resemblance anymore to Christianity but rather is “paganism wrapped in autocracy.”

Yet as the prolonged war has shifted to devastating Ukraine’s infrastructure, petitions have been launched to cancel New Year and Christmas celebrations completely. They argue the electrical grid should not be strained for holiday lighting, while money saved should be given to the armed forces and the internally displaced.

Kyiv will host no concerts, but insists all city trees will be lit.

Whether following the Eastern or Western calendar, however, the church is headed toward December 25. A decision has been taken—at least internally—consistent with an affinity for the West.

“It will be shifted, but we have to study the pace,” said Fedir. “The church as an institution is ready, and will move when the believers are ready as well.”

Ukraine Celebrates Christmas Twice. Now Its Orthodox Christians Can Too.