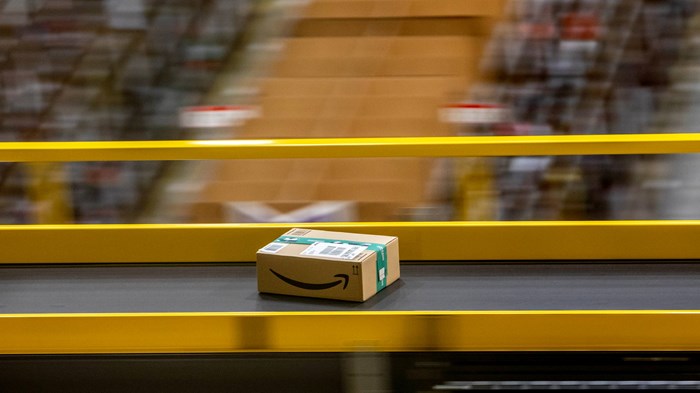 Not anymore. America’s biggest retailer, Amazon, ships seven days a week, and as the site expands Sunday delivery across the country, more drivers are losing what would have been a steady day off.

For many, the shift just means their break will fall during the week. But for some Christians on the job, the new delivery option conflicts with Sunday church services and their conviction not to work on the Sabbath.

Amazon’s seven-days-a-week schedule has already led to two lawsuits from drivers who were fired for not working on Sundays. Both claimed religious discrimination under Title VII, alleging their employer had not provided “reasonable accommodation” for them to work other days.

In a case in Florida, a Sabbatarian Christian lost his job working for a delivery service contracted by Amazon, and the Equal Employment Opportunity Commission (EEOC) launched a lawsuit on his behalf. Last week he secured a $50,000 settlement, and his former company, Tampa Bay Delivery Services, will undergo religious sensitivity training.

For a postal worker in Pennsylvania, though, the case is making its way through the Third Circuit Court of Appeals after a district court ruled last year in favor of the US Postal Service.

Gerald Groff is an evangelical Christian who began working as a rural mail carrier in 2012, a part-time role rotating through holiday and weekend routes based on demand.

After the station he was working for began contracting with Amazon for Sunday delivery, he transferred to another rural station. When that one also started Sunday routes, he tried to adjust his schedule and swap days but ended up missing 24 Sundays of work in 2017 and 2018, before being let go in 2019.

Last week, Groff’s legal team issued oral arguments on his behalf, saying the postal service discriminated against him because of his faith.

Howard Friedman, University of Toledo law professor emeritus, has seen reasonable-accommodation cases continue to rise on his blog Religion Clause. Seventh-day Adventists and Orthodox Jews had often come up in religious accommodation cases because their conviction to rest and worship on Saturdays put them in conflict with typical work schedules.

“Historically, work schedules and holidays tended to be in line with Christian (or at least mainline Protestant) religious and holiday schedules and practices,” he said. “More recently, as we have moved to a 24/7 economy, Sunday work schedules have become more common and pose conflicts for Christians that previously were felt mainly by minority religions.”

Christians have lamented the shift away from businesses observing Sunday sabbath for decades. In CT’s early days, evangelical leaders complained about the uptick in “Open on Sunday” signs in grocery stores, theaters, and other businesses.

“Too largely the Sabbath day has been reduced from a holy day of spiritual replenishment, instruction, and correction, to a mere holiday for pleasure seeking or to just another day of merchandising,” Charles W. Koller, president emeritus of Northern Baptist Theological Seminary, wrote in 1963, two years after the US Supreme Court ruled that “blue laws” restricting Sunday commerce were constitutional.

“Christ made allowance, within the spirit of the law, for works of mercy and of necessity, and for taking care of the occasional ‘ox in the ditch,’” Koller said. “But the moral responsibility of unnecessary Sabbath violation is not to be lightly regarded. Immeasurably greater is the moral responsibility of coaxing others away from Sabbath observance to the marts of trade. Still more serious is the policy of denying to employees the possibility of observing the Sabbath.”

In the late 20th century, states repealed blue laws with the backing of Christian and non-Christians. Up until the last several years, mail delivery remained one of the final holdouts of services that paused on Sundays.

“It grieves me that as a society, things just happen on Sunday as a matter of course, almost automatically. The mail comes on Sunday, the stores are open on Sunday, and everything happens like it does on Saturday,” said David Strain, senior minister of First Presbyterian Church in Jackson, Mississippi.

“I’m not offended by that. I’m not angry at anyone about that. I’m certainly saddened by it because I see how challenging that makes things for those Christians who are trying to be faithful in this area, but I also see the great loss for all people, the loss of that rest and the loss of a spiritual benefit.”

Sabbatarian Christians like Strain see the patterns of work and rest established in Creation as God-given and good for all. While there will always be professions that need to work on Sundays for the common good, like doctors and farmers, they believe most should reserve it as a day for worship and rest.

After the Resurrection, Christians began adopting the first day of the week as the Lord’s Day, but it took hundreds of years to develop the kinds of formal church services we come to associate with weekly worship, historian Craig Harline wrote in his book Sunday. And it wasn’t until the fourth century that Christians began calling it Sunday rather than the Lord’s Day. Before that, too many worried about the pagan connotations around the sun.

Even among evangelicals, there are a range of views on whether Christians are commanded to spend the Lord’s Day in observance of the Sabbath, with some believing that rhythms of rest and worship can take place on other days of the week.

But for Sabbatarians, Sundays are uniquely meant for worship, rest, and fellowship; they happily set aside job obligations as well as most housework, yardwork, and schoolwork. And it’s significant that all share the Sabbath on the same day.

“This notion that regular patterns common to society as a whole facilitate us not just having individual rest—most employers still provide days off—but doing that on the same broad schedule so that everybody has the same days off so we could be together as a society, that is being eroded, I think,” said Strain.

Such Sabbath observance is becoming more countercultural in the busy, hyperproductive 21st century. Believers who avoid shopping or eating out on Sundays as a part of their Sabbath observance do so in the midst of an always-on economy where an Amazon package could land at their door while they’re at church.

“When Amazon started kind of out of the blue doing Sunday delivery, we got burned a couple of times, so Christians need to be very careful if they want to be serious about this and protect people like these [drivers],” said Joseph A. Pipa Jr., president emeritus of Greenville Presbyterian Theological Seminary. “We’re very careful to delay our order a day if it means they are going to deliver it on the Lord’s Day or pay attention to when it’s going to be delivered.”

Sabbatarian Protestants—which fall in traditions ranging from Presbyterians to Pentecostals—schedule work, travel, and other activities around being at church on Sundays, avoiding what the Westminster Shorter Catechism calls “recreations as are lawful on other days.” While some fellow believers see such commitments as legalistic, Sabbatarians see it as a joyful chance to take advantage of a day set aside to draw near to God.

In his book The Lord’s Day, Pipa cites Isaiah 58:13–14, where “if you call the Sabbath a delight and the Lord’s holy day honorable, and if you honor it by not going your own way, and not doing as you please or speaking idle words, then you will find your joy in the Lord.”

As a pastor, Pipa has counseled Christians facing work conflicts around Sunday schedules, first asking them to consider whether their work is out of necessity or mercy and therefore permissible.

In instances where employers cannot accommodate Sabbath observance, they might be advised to quit their jobs to look for other employment, with the support of the church in the meantime. He noted that with restaurants reducing hours due to pandemic staffing issues, servers who otherwise would have to work on Sundays are grateful for the day off.

At his church, Strain said he sees some congregants with “very limited economic choices” in secular society. “You should, as far as you are able, ask for and seek to order your week and your work life to give you freedom to be in church on the Lord’s Day and rest on the Lord’s Day,” he said, “but I recognize that they might not have that luxury.”

In the exceptional cases where conflicts with employers lead to legal action, it’s rarely the sincerity of the Sabbatarian employee’s belief at stake. Instead, courts consider whether a company could have easily accommodated the request or if doing so would represent an “undue hardship” and more than trivial cost.

In Groff’s lawsuit, currently before the Third Circuit Court of Appeals, counsel for the Postal Service brought up that his job was to be a relief carrier in these rural areas, and unlike career mail carriers, Saturday and Sunday shifts are part of the gig.

“There are also questions in Title VII cases of what constitutes a ‘reasonable accommodation,’” Friedman of Religion Clause told CT. “Does it have to be one that completely removes the conflict between religion and work? That is the main issue in the 3rd Circuit case.”

Groff is being represented by a team of lawyers from First Liberty, Baker Botts, the Church State Council, the Independence Law Center, and Cornerstone Law Firm.

“It is unlawful for employers to discriminate against employees on the basis of religion,” said Hiram Sasser, executive general counsel at First Liberty, which specializes in First Amendment cases.

“The USPS should have recognized Gerald’s sincerely held belief that he must observe the Sunday Sabbath and granted him a religious exemption. We must protect the right of every American to engage in religious exercise without fear of getting fired from their jobs.”