Urging a new political engagement and commitment to witness, academics call region’s Christians to seek refuge in God, not their regimes.
Jayson Casper|February 23, 2022 06:00 AM 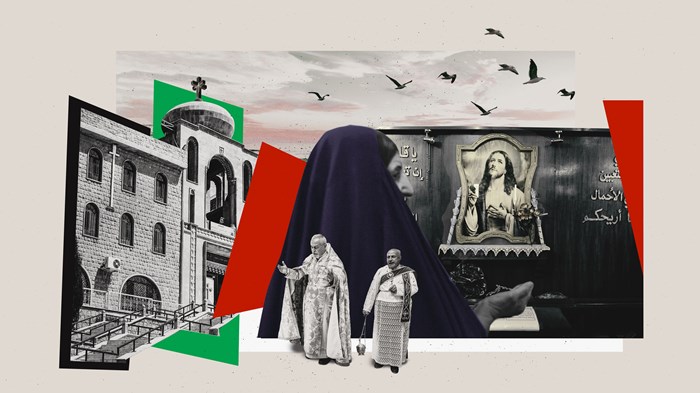 A group of academic Christians in the Middle East has thrown down the gauntlet: The local church, bound in fear to its minority mindset, needs to walk afresh in the Holy Spirit.

“We must tell the truth and call for freedom,” said Souraya Bechalany, coauthor of “We Choose Abundant Life,” a document released last September that makes 20 recommendations. “We are powerful in Jesus Christ, but too often we don’t believe it.”

Bechalany, a professor of theology and ecumenism at the University of St. Joseph in Lebanon, joined 14 other scholars across the region to challenge local Christians to give up their self-understanding of being a minority and to work for the rights of citizenship for all in a changing society.

Local clergy, they say, have instead often wedded themselves to the regimes.

Surveying experience from the Ottoman Empire onward, the document laments how many Christians have taken refuge in sectarianism, turning their vision inward toward survival.

Arab nationalism provided an escape, as Christians took leading roles in developing a common political discourse independent of religion. So did relationships with Western churches, as Catholics and Protestants pioneered modern education and built hospitals to serve society.

But as the region’s nation-states increasingly sacrificed democratic norms in favor of political stability—whether secular or Islamic—church leaders tended in one of two directions: Ally with the authorities, or plead to patrons in the West.

“If we continue in this direction,” said Gabriel Hachem, a Melkite Catholic priest and editor in chief of the French-language journal Proche Orient Chretien, “there is no future for us in the region.”

For now, the regimes are winning, as the challenge of ISIS and political Islam have pushed Christians to support the pillars of authority in alliances of minorities. But in doing so, they sided against human rights and dignity. This is inherently unstable, Hachem said, and Christians suffer also.

Their rate of emigration is rapidly increasing.

The ecumenical Abundant Life is the product of a three-year consultation involving 100 experts, youth, clergy, and selected Middle Eastern Muslims and Jews. The document also critiques Christians in their interactions with these communities.

Toward Muslims, it criticizes the church’s “doublespeak” of “dissembling courtesy” that engages in superficial dialogue while promoting theories of systematic persecution.

Toward Jews, while criticizing religious Zionism and its Western promotion, it nonetheless calls for a “new page” of “serious dialogue.” In some nations of the Middle East, such outreach can land one in jail.

The controversial nature of Abundant Life, in fact, led 4 of the 15 drafting committee members to shield their names. Of the signatories, Lebanon leads with nine, reflective of the nation’s greater level of freedom. Other publicly identified scholars came from Palestine and Jordan.

Those from Syria, Iraq, and Egypt, however, declined to identify themselves.

“The document denounces the regimes but does not call for revolution,” said Hachem. “We are not pretending to say what they should do.”

The heads of churches, however, should lead the way in careful collaboration. A better strategy is needed, said Bechelany, to work with moderate Muslim leaders aligned with the principles of Abundant Life .

Needing full approval from clerical representatives, the Middle East Council of Churches (MECC) has not endorsed the document.

But this has not deterred the authors, many of whom have lengthy experience working with the MECC. Moving beyond the document, they formed the We Choose Abundant Life Group in order to spread their ideas beyond academic circles. Youth have been particularly engaged.

“We cannot wait for church authorities to accept everything before we do anything,” said Rouphael Zgheib, national director of the pontifical mission societies in Lebanon. “This is the faithful, prophetic voice, and the task of theologians.”

In fact, mission is a key theme in Abundant Life, and witness is repeated throughout.

“Christians misunderstand the meaning of their presence,” said Hachem. “It is not to play a role within these societies, but to witness to Jesus Christ, the resurrected one, and call for his universal salvation.”

For too long, he explained, Christians have relied on the leveraging of their institutions to gain influence in society. It has worked well, as they have educated generations of Muslims and healed them in their hospitals.

But now, Muslims are catching up, and will no longer need this Christian role.

What they really need is the witness to Jesus.

“I have to work on behalf of the gospel—quietly, with wisdom, love, and respect,” said Bechalany. “But I have to be a witness, or they will never know him.”

Within Islam, most Muslims do not recognize the right of religious conversion, or to publicly give up their faith.

A former secretary general of the MECC, Bechalany said she challenges Muslims to respect the right of religious conscience, without calling them specifically to Christianity. But Christians she challenges toward unity. Securing this “paradigm shift” will mean nothing if the church is not prepared to receive any who show interest in Jesus.

“How can we be witnesses to Christ’s resurrection when we are divided?” Bechalany said. “We have to work on ourselves first.”

Abundant Life calls for full engagement with the MECC, which it rattled by promoting a contextual approach that includes lessons from sociology and cultural anthropology, Zgheib said. The church, unfortunately, relies on dogmatism and resists frank discussion in an atmosphere of freedom, he said.

But the whole church is needed, and Abundant Life calls for better incorporation of youth and women into leadership and decision-making. It even commended Protestants for their ordaining of female pastors.

One of them, Najla Kassab, a Lebanese Presbyterian, served on the drafting committee. She was joined by two others of Reformed heritage, George Jabra al-Kopti, an Anglican from Jordan, and Mitri Raheb, a Lutheran from Palestine.

And the document won endorsement from the evangelical SAT-7 television ministry.

“This is a group that wants to see change in the church,” said George Makeen, executive director for Arabic programming. “They have thrown a rock into the still waters.”

Makeen believes the document’s call to witness is consistent with SAT-7’s understanding. But it goes further. If traditional Christians have been focused on survival and their role in society, evangelicals in the Middle East have often reduced it to belief and moralism.

“We witness to the power of Jesus Christ,” Makeen said, “and how it changes us to work for the restoration of the world.”

“For centuries we lived in the mentality of the victim, thanking the Lord we still endure,” he said, with special reference to his Egyptian heritage. “But here the core message is to develop a Christian character that will stand against injustice and inequality.”

Just be sympathetic with those who in the face of violence find whatever refuge they can, Makeen said. Abundant Life proscribes no method of either political activism or spiritual outreach. But to the Syrian, Palestinian, or Egyptian, he said the charge is clear:

“Witness is essential. Do not sacrifice it for existence.”

It calls for a level of faith most in the West cannot imagine, Makeen said.

And to some degree, even by the drafting committee. Some in the group were threatened not to affix their signature, said Bechalany.

“Do we have the courage to witness to the truth?” she asked. “Jesus Christ offered his life. We must be willing to do the same.”

A selection from the choices and policies section of the document, on the “profound change of mindset” needed to find abundant life:

• The social, political, and theological realities in the Middle East today, with all the challenges they pose, place before Christians crucial choices that require a profound change of mindset. This change requires us to move from an obsession with existence and survival to taking the risk of presence and witness. It means building durable policies based on biblical principles and enshrined in the prophetic role we need to play, the significance of our witness to the resurrected Christ, and our engagement in our societies with their different geopolitical contexts.

• The prophetic role of the Christians of the Middle East requires us to be biased towards the causes of freedom, justice, human rights, the right to self-determination, democracy, and the regular peaceful transfer of power in all the countries of the region.

• Christians in the Middle East should refuse to adhere to dictatorial political regimes, whether ideologically secular, theocratic, or feudal, or to identify with them. They must also reject a “minority alliance” and the choice of calling for protection. They must refrain from politicizing religion and religionizing politics, and from any authoritarian gains, influence guarantees, or personal benefits, while preserving their positive social role.

• We also urge the churches to develop strategies and undertake positive and practical initiatives to help Christians stay in their countries, and foster their involvement in the public sphere and the struggle for a civil state, a state of constitution and institutions, governed by full citizenship that will embrace diversity and be ruled by modern civil law.

• Hosting refugees and displaced people on the basis of human brotherhood/sisterhood is an obligation referred to several times in both Old and New Testaments … It is important for Christians in the Middle East to be in solidarity with the oppressed and support those whose rights have been violated, to defend them, to empower them, to expose their oppressors, and to establish processes for calling those oppressors to account within the bounds of justice.

• Media and communication are a supporting pillar in establishing Christian and human values. … Churches must give [them] utmost priority ... in terms of vision, policies, and technologies when mainstreaming their values, especially when it comes to living together with respect for diversity. We urgently need to develop a joint ecumenical action plan for media that would encourage a professional discourse in the service of mission and foster human dignity, speaking to both mind and heart, and free from rigid tradition, fake piety, and apologetic debate.

• Our Christian presence must be founded on service to every human being, dedicated love, and genuine forgiveness, in obedience to the will of God. Our aim must be a more just and humane society in which the kingdom of God may be fulfilled, so that human beings may receive life as God has desired it for them, according to the words of Christ in the Gospel of John: “I have come that they may have life, and have it abundantly.”