While some foreign missionaries have left for neighboring countries, many are standing alongside national church leaders to minister amid uncertainty.
Rachel Pfeiffer|February 9, 2022 06:00 AM 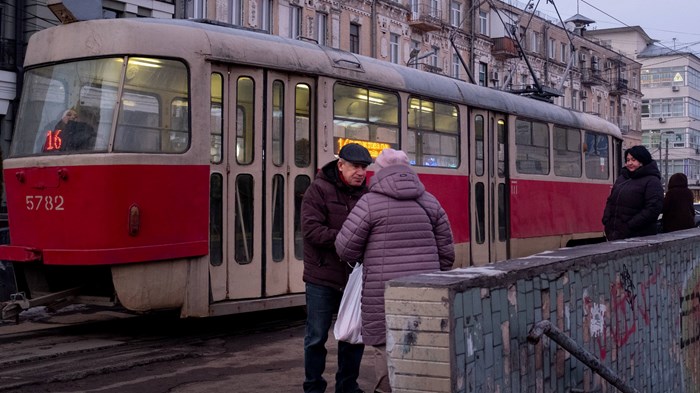 Missionaries serving in Ukraine have sent out urgent prayer requests and asked the Lord for his protection and wisdom as they consider what’s ahead for them and their ministries as the threat of invasion looms.

Some missionaries have already left to wait out the situation in neighboring nations or even back in the US, while others remain even as the Russian military presence continues to build near the border.

Ukraine’s president Volodymyr Zelensky has urged citizens to remain calm, as invasion isn’t certain. However, the escalating crisis is impacting ministry at a time when evangelicals say a new generation of Ukrainian church leaders is gaining momentum.

At Kyiv Theological Seminary, American Rick Perhai—who has served in the country more than two decades—is taking his cues from his students.

“They want to be here to study, and that gives me great hope,” said Perhai, the school’s director of higher education development and a missionary with SEND International.

The current tensions and pressures are being exerted on a Protestant church that has grown substantially in the past few decades. The choice for missionaries to stay or go is complicated for both the missionaries themselves and for the organizations that send them.

SEND International has been sending missionaries to Ukraine since the 1990s. As of the beginning of February, most of its missionaries were still in the country. The organization trains missionaries to handle crisis situations and has a security team to evaluate risks and make plans for evacuation based on access to food, water, power, transportation, or communication.

“As leaders, some of us are not in those local areas, so it’s important to us to listen to our missionaries on the ground and what the Holy Spirit is telling them, then discerning that with the information that we get from government sources and others who are assessing the situation,” said CEO Michelle Atwell, who previously served in Kyiv herself.

In cases of disagreement, SEND will also bring the missionaries’ sending churches into the conversation, but in the end, the final decision about evacuation will rest with SEND’s director of corporate security and international director. However, decisions only reach this point after much evaluation and prayer.

ABWE International operates similarly to SEND, with a security director and crisis management teams. Most of ABWE’s missionaries to Ukraine have relocated to neighboring countries, but some remain. Alex Kocman, a communications officer for ABWE, said the decision to stay or go can depend on a number of factors, including if the missionaries have family and children with them.

Joshua Tokar, director of English language services at Ukraine Evangelical Theological Seminary, has relocated to a neighboring country with his family for the time being. He’s able to continue teaching virtually.

“It’s not a decision that’s taken lightly,” said Tokar, who has been in the country for eight years. “We have built long-term relationships [in Ukraine], and our goal is to stay as long as is reasonably possible.”

Ukraine’s current conflict extends back to when Russia annexed Crimea in 2014, but the countries have a history of tension. Under the USSR, Christians faced brutal persecution, recalls Ruslan Khmyz, president of Kyiv Theological Seminary.

“I know what it means to be persecuted,” Khmyz said. “When freedom came to Ukraine, many things completely changed. The number of churches started to grow very fast. Many new Christians dedicated themselves to Jesus, and they wanted to grow, to serve, and to proclaim the gospel.”

Khmyz described how the Communist regime tried to destroy Christian theology. Since Ukraine gained its independence in 1991, nationals, missionaries, and foreign ministry organizations have established seminaries and discipleship programs to help believers and develop church leaders.

“Ukraine is the main missionary-sending country for Eastern Europe and Central Asia,” said Tokar. “The church is very strong. As far as Europe is concerned, the Ukrainian church is perhaps the strongest and is doing the most for education, training, and sending out workers.”

Many ministry organizations working in Ukraine have shifted their approach to instead come alongside Ukrainian believers as they develop their own ministries and send their own missionaries.

“It’s not from the West to the rest. It’s from all peoples to all peoples,” said Perhai said. “That’s the only way that the Great Commission is going to be completed.”

In addition to being mission-minded, Ukrainian churches already have experience ministering to refugees from the conflict in the eastern Donbas region. With the threat of invasion, churches in western Ukraine say they are willing to take in Christians from churches in eastern Ukraine who may have to flee.

Khmyz said his church is encouraging its members to have enough food and water on hand to support their families for a few days and to share with others in a crisis. Doctors have also provided first aid training for church members. However, the greatest hope of Ukrainians is that these measures won’t be necessary. Khmyz’s church has also held packed prayer meetings. He said there’s a sense that many are searching for real hope.

“It’s not enough to say, ‘Everything will be okay.’ We need to give people the real hope of Jesus,” Khmyz said. “The task of the church in unforeseen circumstances and chaos is to stand strong in the Lord and act according to God’s will. Christians must be salt and light in all circumstances, even in times of war.”

Even as missionaries and nationals alike deal with these tensions, minister to people, and prepare for a possible crisis, everyday life goes on. For many, there is nothing to do but wait and see.

“The president of Ukraine was basically telling his people to be calm and keep living life. We sense that’s how our partners there are trying to live, and we also sense that they’re not going to just roll over and wait for the Russians to come,” Steve Eckert, president and executive director of READ Ministries, which advocates for the needs of the church in Ukraine and channels support to missionaries and seminaries in the country. “They’re continuing to work, and we will continue to work with them on initiatives for the future.”

At this time, Christians in Ukraine are asking for prayer that their country will be able to continue to live in freedom and peace. They also ask those who know someone serving in Ukraine to reach out, offer encouragement, and perhaps connect over video. Leaders see the current attention toward the church in the Ukraine as a chance to spread the word about the mission advancements being made amid such tense circumstances.

“Prayer is necessary because we feel unity with other Christians. It gives us the power to live and the power to serve. It gives unity in Jesus. We understand that we are very weak, but God is strong,” Khmyz said. “We hope that God by his mercy and his grace will protect our country.”