She will become the first contemporary Christian artist to receive the annual award, given to recognize her place as the “Queen of Christian pop.”
Adelle M. Banks - Religion News Service|July 21, 2022 11:51 PM 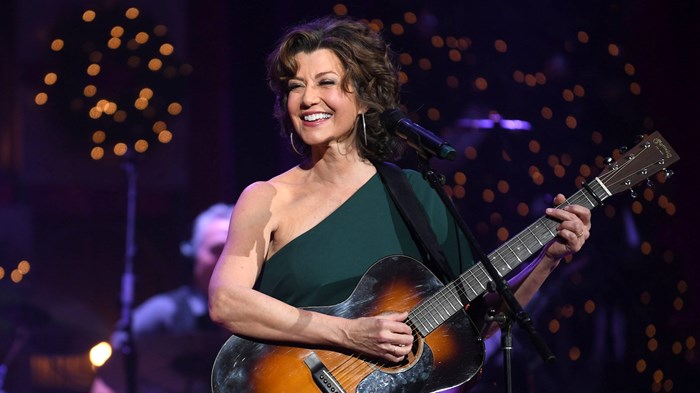 Contemporary Christian musician Amy Grant has been named one of the Kennedy Center’s five honorees for 2022.

“Never in my wildest dreams did I imagine ever receiving this prestigious Kennedy Center Honors,” Grant said in a statement. “I cannot wait to celebrate with my fellow honorees, friends, and family. Thank you for widening the circle to include all of us.”

Kennedy Center Chairman David M. Rubenstein lauded Grant, saying in a statement that she “became the first artist to bring contemporary Christian music to the forefront of American culture, then equally thrived after crossing over into mainstream pop with hit after hit, and today is revered as the ‘Queen of Christian Pop.’”

Over more than four decades, Grant has had album sales exceeding 30 million and more than a billion global streams, earning three multiplatinum albums, six platinum albums and four gold albums. She was the first contemporary Christian musician to have a No. 1 hit on the pop charts with “Next Time I Fall,” a 1986 duet with Peter Cetera of the band Chicago, and the first to perform at the Grammy Awards, eventually becoming a six-time Grammy winner.

“Baby, Baby,” a hit from her 1991 platinum album “Heart in Motion,” helped spread her fame. As she marked its 30th anniversary last year, she told Religion News Service it was both an overwhelming and joyful experience.

“It’s like the jumping through the ring of fire,” Grant recalled in the RNS interview. “Pretty hot when you’re in the middle of it, but it doesn’t last that long.”

“We’ve had gospel before,” she told AP. “We’ve had plenty of R&B and soul. … We’ve had country music, but we haven’t necessarily had Amy Grant and Christian pop in the same way.”

Other gospel music winners have been Marion Williams, star of the Ward Singers and later a soloist, in 1993; and Mavis Staples, a member of the Staples Singers, who also moved onto a solo career, in 2016.

Other 2022 honorees have been known for their faith connections. Gladys Knight, a convert to The Church of Jesus Christ of Latter-day Saints, has sung at the Mormon Tabernacle Choir’s Christmas concerts. U2, with lead singer Bono, has been known for its Bible-related lyrics in songs such as “I Still Haven’t Found What I’m Looking For.”

Eileen Andrews, vice president of public relations for the Kennedy Center, told RNS that while Grant is the first contemporary Christian artist to be honored, others have had gospel music connections, most prominently Aretha Franklin, who recorded gospel albums and was celebrated at the Kennedy Center Honors in 1994.

Grant and the other honorees will be saluted in a celebrity-filled gala at the center’s Opera House on December 4. It will be broadcast at a later date on CBS.