Hindu comments on wife Aisha and Shiite film on daughter Fatimah spark protests in India and England.
Jayson Casper|June 24, 2022 06:00 AM 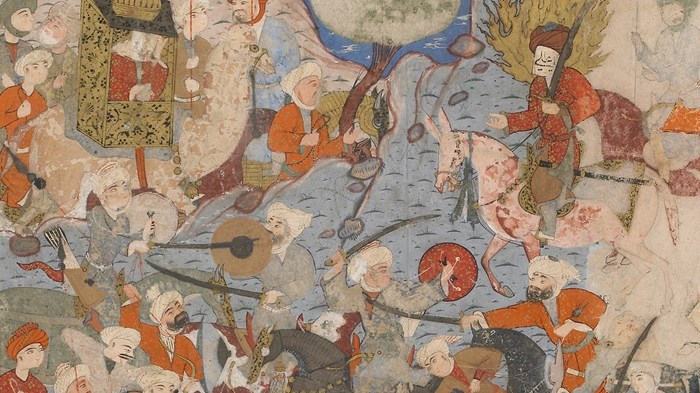 Founding fathers are often sacred, but not sacrosanct.

In recent years, Americans have wrestled with the slave-owning legacies of George Washington and Thomas Jefferson. Confederate statues have been toppled, ideologically refighting the Civil War for some. Pilgrims have become pillagers, and Plymouth Rock equated with imperialism.

Muslims are having a similar moment.

Their prophet is called a pedophile. Their miracles, a myth. Successors to Muhammad are compared to ISIS. And it is not just Islam’s historic men. Two current global controversies concern two of the faith’s celebrated founding females: Aisha and Fatimah.

The International Union for Muslim Scholars has renewed its call for an international ban on insulting religions. And from India to England, Muslims have poured into the streets this month in protest.

Christians—whether leading such polemics or suffering under blasphemy accusations—have often been embroiled in such Muslim controversies. Many are relieved that these latest episodes are centered elsewhere.

“But Christians in both India and Pakistan are quite frightened,” said Juliet Chowdhry, a trustee for the British Asian Christian Association. “It is inevitable that as a vulnerable religious minority that is incorrectly perceived to be in league with the West, Christians will find themselves caught up in the anger.”

Thus they are keeping silent, said a Christian leader in Pakistan who—illustrating the point—requested anonymity due to the sensitivity of the situation.

In late May, a spokesperson for the ruling Bharatiya Janata Party (BJP) in India responded passionately on a talk show with Muslims when she was chided about a disputed Hindu temple. In retort, she cited Muhammad’s marriage to Aisha, often considered the favorite of his wives.

The BJP under Prime Minister Narendra Modi has led India in the direction of Hindu nationalism, stoking tensions with its 15-percent Muslim community. Though always a minority religion there, Islam ruled the subcontinent for centuries, with some ancient temples turned into mosques.

In one location, a shivling idol was allegedly discovered last month. Yet the Muslim talk-show guests said the item’s shape—holy to Hindus in honor of Shiva—resembled a fountain instead. The panel then descended into a heated discussion over the mocking of gods and goddesses.

“Should I start mocking claims of flying horses … and having sex with [Aisha] when she turned nine?” exclaimed the official. “Should I start saying all these things that are mentioned in your scriptures?”

Islamic tradition says a winged animal known as Buraq carried Muhammad on a night journey from Mecca to Jerusalem and back. Similar traditions quote Aisha on her tender age at the time her marriage was consummated, while some more-contemporary scholars cite evidence to argue she was in her teens.

At least 15 majority-Muslim nations—led by those in the Arabian Gulf—have condemned India, which in turn censured both the BJP spokesperson and another offending official. The grand mufti of Oman called the comments a “war on all Muslims,” while Egypt’s al-Azhar mosque described them as “real terrorism.”

Muhammad was 53 when he married Aisha, and Islamic sources indicate a happy existence together. Aisha grew up to become a scholar and a military leader, often honored by modern-day Muslims as an example of feminist egalitarianism.

But she is also a center of controversy—resurrected in a recent British film.

After the death of Muhammad, a faction of Muslims believed leadership should remain in the bloodline of the prophet. Known as Shiites, this sect believes the caliphate was promised to Ali, the prophet’s nephew and husband to his daughter, Fatimah. About 10–15 percent of Muslims are Shiites, with the great majority residing in Iran, Iraq, India, and Pakistan.

Sunnis, the majority sect, believe Muhammad did not designate a successor. The community then met to elect one, a caliph, and the first three were chosen from among Muhammad’s closest companions. Ali became the fourth caliph, but in a clash known as the Battle of the Camel, Aisha rode the Arabian dromedary in a rebellion against him.

The Lady of Heaven film builds its story around Fatimah, whom Muslims esteem as akin to Mary, the mother of Jesus.

In a poignant introductory scene, Fatimah is introduced as the first victim of terrorism, paralleled as an elderly woman comforts an Iraqi child whose mother was killed by ISIS. Winning an award for visual effects, the $15 million partisan film relates a Shiite perspective that the famed daughter of Muhammad died in childbirth—due to injuries suffered earlier in a raid ordered by his first successor.

Sunni orthodoxy honors the first four caliphs as “righteous.” Thereafter the community descended into civil war, with Ali and Fatimah’s children on the losing end. Hussain, the younger of two sons, was killed in battle, and his commemoration by Shiites is often accompanied by mourning and ritual self-flagellation.

Though Shiite-dominated, Iran banned the film as divisive to the Muslim community, while Pakistan, Egypt’s al-Azhar, and the Muslim Council of Britain all condemned it also. Following large-scale Sunni protests, most UK cinemas canceled upcoming screenings.

According to Rotten Tomatoes, the film’s approval rating among reviewers is 20 percent; among its audience, 75 percent.

“If we are a nation that believes in the freedoms of religion and speech,” said Chowdhry, who immigrated from Pakistan to the UK in 2003, “then this groundbreaking movie should be in cinemas.”

The British government cut ties with a Muslim adviser who circulated calls to protest the film. Chowdhry lamented that after years of funding for counter-radicalization, Islamic fundamentalism still captivates the local Sunni community. The UK’s Shiite citizens are “demoralized,” she said, at the capitulation to “an army of haters.”

Fouad Masri, the Lebanese American president of the Crescent Project, has spent nearly 30 years sharing Jesus with Muslims and equipping other Christians to do likewise. He believes that the core of Islam is a political system, with Muhammad as the founding general. To him, the years of internal and expansionary warfare by Muslims contrast clearly with the blood of early church martyrs.

“It is like the metric versus imperial systems,” Masri said. “The measure you use will judge the other.”

As they build bridges with Muslim neighbors, Christians should not focus on issues like Aisha’s marriage as they share their faith, he said. But in an age of readily available information, it is becoming “increasingly difficult to hide” unsavory stories about Muhammad’s behavior. And since Muslims hold their prophet to be the pinnacle of humanity, meant to be imitated, Masri said it is only right for Christians to contrast his life with the one Jesus lived.

Martin Accad, associate professor of Islamic studies at Arab Baptist Theological Seminary in Beirut, faulted the “immaturity” of Muslims who cannot tolerate criticism. If they could simply “carry their cross,” so to speak, they would win the respect of nonbelievers—including those who hate them.

But unfortunately, he said, there is a long Christian history of egging them on—especially the further one is removed from their community. The seventh-century John of Damascus was not soft on Islam but was also a functionary in the caliphate. Yet the ninth-century George Hamartolos and Nicetas of Byzantium, writing from Christendom, uttered derogatory words about Muhammad that Accad dared not repeat.

Some British missionaries to the subcontinent were similar, said the anonymous Pakistani Christian leader. Others spoke forcefully but fairly. And in fact, 30 years ago, local believers would have too. But following partition and Pakistan’s evolution into a Muslim state, Islamic extremism steadily increased.

Today, no one dares speak against Islam.

“Sharing your faith is like walking on eggshells,” said the leader, based in a major city. “Most Christians are poor and just want to survive.”

In 1986, sharia law was introduced to Pakistan, and in 1993 its blasphemy law was amended to prohibit insults to the family of Muhammad. The local Shiite minority, said the source, also learned how to behave.

“The less I said about Muhammad, the better,” said Warren Larson, a missionary to Pakistan for 23 years. “Partly, it was to avoid a riot.”

Operating with relative freedom back then, Larson, now senior research fellow at Columbia International University’s Zwemer Center for Muslim-Christian Relations, would rig up a book display to the back of his Land Rover. When crowds formed and asked what he thought about Muhammad, his learned reply was simple: “I came here to speak about my prophet, not yours.”

Then he would be left alone.

Similar was the strategy in the Arabian Gulf.

“I never felt I couldn’t speak about Jesus,” said Jim Burgess, pastor emeritus of Fellowship Church in Dubai and the former evangelical representative to the Gulf Christian Council. “I couldn’t evangelize, but I could testify of my belief that not only is he the Messiah but he is also God.”

Sometimes speaking out against religious intolerance is not helpful, he said. It can cause additional harm to those you are trying to defend. But of the controversy over Aisha, he would have advised Gulf rulers to respond as they did. The Indian official’s words were hurtful and could lead to more hatred.

Burgess said that as Western countries increase in Muslim population, many Islamic nations are trying to become more moderate. After spending 13 years in the United Arab Emirates, he has learned how to operate in the middle.

“The right to speak freely comes from a Christlike life,” he said. “Insensitivity is just another name for intolerance.”

Instead, some call out the hypocrisy.

The anonymous Pakistani Christian noted how few participants in the dispute lodge any criticism against China’s treatment of its Muslim Uighur population. And India responded to Pakistan’s rebuke by calling its neighbor a “serial violator of minority rights.”

The heterodox Ahmadis are the chief victims of Pakistan’s blasphemy law, said Larson, and have been officially declared non-Muslims. And Sunnis will often line the streets to mock Shiite commemoration of Fatimah’s Hussain. When Shiites have retaliated, their shops have been burned.

It is better in Pakistan’s cities, said the Christian leader. But while his community has slightly better relations with Shiites, Christians do not get involved.

“Sunnis and Shiites are two brothers fighting,” he said. “When they come back together, we will be the bad guys.”

It will not happen, said Masri. Though mercy is prominent in Islam, he said that the initiation of reconciliation is not. The conflict has been ongoing for centuries, and while Christians should seek to be peacemakers, only Jesus can change the human heart.

Accad has more hope of success. Seeking peace and showing love, Christians can narrow divergent narratives and help both Sunnis and Shiites recognize their differences as matters of interpretation.

He has lived the struggle in Lebanon.

“As non-Muslims we have no benefit in Shiite-Sunni conflict,” Accad said. “We should reach out to Muslims who care about justice and partner with them in opposing harmful medieval practices.”

Masri noted that child marriage was banned in Saudi Arabia in 2019. In Iran the legal limit for girls is 13, while marriages in the 10–14 age bracket increased almost 11 percent.

But can Accad’s hope for reconciliation take root in the UK?

Prayer and discernment are necessary, said Chowdhry, who recognized internecine conflict as an opportunity for witness.

Yet Christians should emphasize joint Sunni-Shiite respect for Jesus, she recommended, and offer to read the Bible together. Sharing what God has done in your life is helpful, and if individuals come to Christ, continue to support them. They may face severe consequences from their families and communities—and the church must fill the void.

But recall also that no one likes having their heroes sullied. Such sympathy can help Americans, Christians, and Muslims alike—especially toward the Almighty.

“An omnipotent, omniscient, and omnipresent God does not need men to defend Him,” said Chowdhry. “He is more than capable of defending himself.”

Tags:
None
Posted by:
Jayson Casper