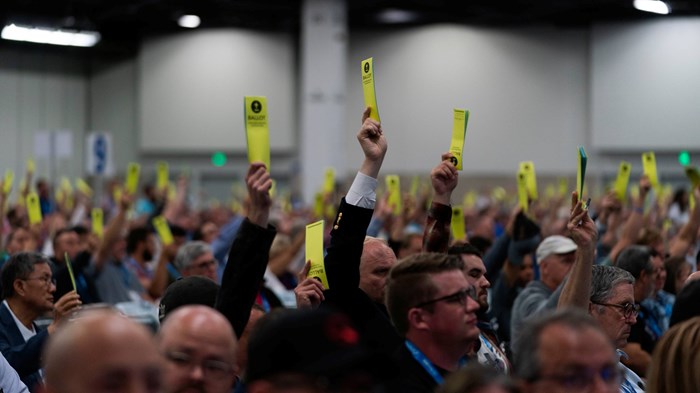 With a wave of yellow ballots across a massive meeting hall in Anaheim, thousands of Southern Baptists voted to reform their denomination’s response to abuse, including adopting the database of abusers that survivors had long called for.

Two survivors in attendance hugged and cried, and supporters of the measure rose in applause as the move passed at the SBC annual meeting on Tuesday afternoon. The much-anticipated vote came less than a month after the landmark investigative report into the Executive Committee (EC).

While the EC kept a secret list of hundreds of abusers, the new “Ministry Check” website will keep a public record of credibly accused abusers who have served in Southern Baptist churches and entities. It will be maintained by an independent firm, which will take and evaluate submissions.

A new task force, authorized by Thursday’s vote and to be appointed by the new SBC president, will coordinate the creation of the website as well as evaluating additional reforms over the next year.

North Carolina pastor Bruce Frank, the head of the previous task force that oversaw the investigation, spoke forcefully about the need for the convention to act and called the two recommendations that passed “the bare minimum for what could be called reform.”

There were a few efforts at limiting or dismissing the calls to reform, including messengers coming to the microphone to challenge the idea that sex abuse is a systemic and widespread problem in the SBC and to reject the Guidepost Solutions report because of the firm’s pro-LGBT stance. Still, those efforts did not dramatically influence the vote, which was overwhelmingly in favor of Frank’s recommendations on behalf of the task force.

“In the Bible, our book tells us that God is so sovereign that he can even take pagan nations and chastise his own people. He did it with Syria. He did it with Babylon,” Frank said. “The issue is not what does Guidepost think about LGBT; it’s what do Southern Baptists think about sexual abuse.”

The presidential address from outgoing SBC president Ed Litton, a pastor from Alabama, also set the tone of God’s judgment due on the denomination after the weight of the abuse report’s findings.

Litton, Frank, and multiple speakers made reference to the survivors in the room. Jules Woodson and Tiffany Thigpen, two survivor-advocates, came to the convention to represent survivors and handed out teal ribbons as signs of solidarity. Woodson told CT before the meeting that she was holding out a “sticky hope” and waiting to see the wave of yellow ballots in favor of the reforms.

Advocate Rachael Denhollander, a member of the Sexual Abuse Task Force, saw the vote as a signal of support for future generations of abuse survivors.

“That was women being believed,” she said, listening the names of survivors who had come forward and pushed for change. “Because they didn’t give up, those ballots went up today.”

Tiffany Thigpen, proudly sporting her teal ribbon, also celebrated the significance of the move, tearing up as she recalled it an hour later.

“It’s a victory in so many ways because people’s hearts changed, and that’s something only God can do.”

Survivors and denominational leaders agree there is still a lot of work to be done. The new abuse reform task force already has five assignments to address, ranging from studying Guidepost recommendations to helping improve the work of the credentials committee.

Also, the direction of the abuse reform task force will depend on the new president of the SBC, who will be named later today, as two of the leading candidates have differing approaches to the issue.

The recommendations listed here passed, with one amendment adjusting language to ensure any changes would be “in keeping with Southern Baptist church polity for feasibility.”