“How much longer, Lord?” and “God, break the bones of my enemy” now equal hallelujahs as leaders ask for advocacy and assistance, lamenting the silence by Russian Christians.
Jayson Casper|March 18, 2022 06:05 AM
español 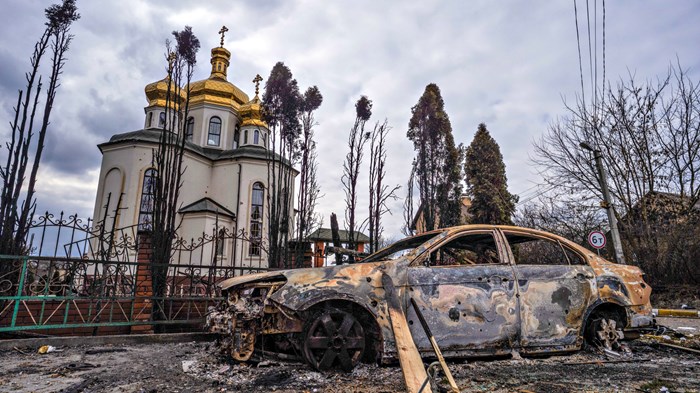 One month ago, Taras Dyatlik gathered in Moldova with friends and partners for another 10-day round of mundane seminary meetings. Serving as regional director for Eastern Europe and Central Asia for Overseas Council, he was a lynchpin for strategy and funding for a network of theological institutions in Ukraine and Russia.

Three days later, he was desperately scrambling back to Kyiv. Dyatlik’s family—like much of Ukraine—was under Russian military fire. And the only thing louder than the air raid sirens that would soon pervade his sleepless nights was the silence of his Russian colleagues.

“It’s not a conflict, it’s not a situation, it’s not tension within Ukraine; this is invasion, this is aggression; this is not a special operation,” he said, using the terms employed by most Russians—and too many otherwise cautious supporters in the West.

He emphasized the Bible shows the importance of precision in language.

“It’s not just that Abel died or that Jesus was just betrayed; Judas betrayed Jesus, Cain killed Abel,” he said. “Not just that a man sinned; Adam and Eve sinned. Biblical truth has names, has a cause-and-effect chain.”

Dyatlik’s charged remarks mirrored others voiced at an online roundtable organized Thursday by the Ukraine-based Eastern European Institute of Theology (EEIT). About 500 supporters, partners, and general wellwishers registered for The Russia-Ukraine War: Evangelical Voices, eager to hear from fellow believers on the front lines.

The attendees, from at least 25 nations and 20 US states, received theological reflection—and raw emotion.

“It’s difficult for us Ukrainians to stay calm when we talk about what is happening in Ukraine,” said Roman Soloviy, EEIT director, who served as moderator. “Most of us men have never cried so much as during the last three weeks. We really need your help, your prayer, and your voice in the world.”

Oleksandr Geychenko, rector of Odessa Theological Seminary (OTS), expressed the shock of all.

“We died with the pregnant woman and her child when the maternity hospital was bombed. We fled with those running from Russian shooting,” he said. “All we were used to is wiped out—now just a wilderness.”

OTS is the oldest of the Ukrainian evangelical seminaries, tracing its history to a 1989 local effort to train preachers and Sunday school teachers. The campus was evacuated at the start of the war as the Ukrainian military took up occupancy in defense of the Black Sea port.

But what has puzzled and discouraged Geychenko most is the position of many Russian evangelicals. A week before the invasion, as tensions were rising with Moscow, he participated in an initiative to craft a joint statement by theological educators in Eastern Europe and Central Asia that would condemn the threat of and preparations for war.

The Russian participants balked, he said. They wanted a generic call to prayer for peace.

“A week later, our cities were hit by missiles and these colleagues started changing their perspective,” Geychenko said. “Unfortunately, the wider circle of Russian ministers, evangelical celebrities, and average Christians have not done this.”

“Most of the experts are wrong when they say that this war is Putin’s war,” he said. “No, this war is supported by a significant portion of Russian people.”

The great challenge, said Valentin Siniy, rector of Tavriski Christian Institute (TCI), is processing the feelings of hurt and betrayal.

Located in Kherson, the first major city to fall under Russian control, his seminary is now occupied by the Russian army. The Ukrainian Orthodox Church labeled these occationally repeated actions “sacrilege.”

Siniy cited the biblical example of Jesus cleansing the temple of money-changers with a whip. “If we are going to hide our fear, our anger behind a mask, then we will be acting like Pharisees,” he said. “… We Ukrainians will need to accept our anger and give it to God.”

He reflected on the Mennonite-influenced history of his youth. But today Siniy is praying the curse of Deborah in Judges 5 upon those who did not come to help. Seeking to direct it against the war itself, he also prays positively that God’s kingdom would more clearly manifest itself in the world.

“Someone has said that the expression ‘How much longer, Lord?’ is as spiritual as the word hallelujah,” he said. “I want to take a step further and say that I have come to the conclusion that the words ‘God, break the bones of my enemy’ are as spiritual as Aaron’s blessing.”

As rector of Ukrainian Evangelical Theological Seminary (UETS) in Kyiv, Rusyn is one of a handful of staff who have stayed behind to help their community. The campus initially served as a hub for ministry to both neighbors and those fleeing war zones further east.

But then it was shelled, his neighborhood fell under Russian control, and he now lives in the office of the Ukrainian Bible Society.

Missile fire, he added, was audible during the presentation.

“This is a full scale, unprovoked war of the Russian Federation against the Ukrainian people,” he said. “The goal is the complete destruction of Ukraine.”

Yet he still sees God at work. Rusyn is learning the meaning of incarnational ministry. Neighbors promise to visit the campus when the war has ended. Bibles are distributed to soldiers and civilians alike.

And he sees an even greater impact.

“The war has brought Ukrainians together,” Rusyn said. “If the church follows Christ, it follows where the need is greatest and stays there.”

Still able to remain safe so far is Stanislav Stepanchenko, dean of Lviv Theological Seminary near Ukraine’s western border. Every day his campus hosts about 100 people fleeing on their way to neighboring Poland or Romania.

The UN estimates more than three million refugees from Ukraine.

“We are the first place they can take a deep breath and get some food,” he said. “There is no fighting in our streets, but we see the war in the eyes of those escaping.”

Coordinating the work of 40 volunteers, Stepanchenko agreed with the imprecatory prayers of his colleagues. He has been praying Psalm 82 and Psalm 55, wishing the aggressors to descend into the pit.

But he and his team find hope in Matthew 25—I was a stranger, and you took me in—and they remind themselves of this in every act of service. Even so, they think of the dozens of children killed in the war, returning frequently to the Genesis cry of Rachel.

“Ukraine is weeping for her children, and refusing to be comforted,” Stepanchenko said. “Why is Putin doing this? Because he can.”

A theater sheltering hundreds of civilians in Mariupol was shelled on Thursday—despite two large labels of “CHILDREN” painted outside. A neighboring pool complex was also hit, with women and children inside.

The damage throughout Ukraine is considerable. The Russian offensive has largely stalled, with major cities shelled from a distance. Religious sites have not been immune.

Soloviy and Geychenko joined dozens of other clerics and religious freedom advocates to condemn the damage suffered by 28 churches, mosques, and synagogues. The Religious Freedom Roundtable in Ukraine also tallied the killing of four Orthodox priests and the capture of two more (one released since).

Similarly, CBN reported the kidnapping of one of its affiliated aid workers near Mariupol, a woman named Valentine.

The roundtable’s appeal, signed also by the Ukrainian Bible Society, Youth for Christ, and leaders from the Baptist, Pentecostal, Orthodox, Muslim, and Jewish communities, called for Orthodox Church parishes affiliated with Moscow to break ties with Patriarch Kirill of the Russian Orthodox Church.

It has already happened abroad. Churches in Amsterdam and Estonia have announced separation.

Kirill foresees a tense struggle for Orthodoxy in Ukraine, and a recent survey bears it out. Prior to the war, the Ukrainian Orthodox Church (UOC) reportedly had about 12,000 parishes, while the breakaway Orthodox Church of Ukraine had about 7,000, notedEurasia Daily Monitor. (Though the Jamestown Foundation journal also noted this tally fails to reflect attendance at each parish and requests for transfers that remain unapproved.)

But a recent poll conducted March 8–9 found that more than half of parishioners in the UOC favor breaking relations.

Pope Francis of the Roman Catholic Church and Archbishop Justin Welby of the Anglican Church remain in dialogue with Kirill. Separate communications emphasized an agreed-upon need for peace and justice.

Kirill, meanwhile, told Welby the politics trace back to 2014, alleging Ukrainian efforts to repress Russian speakers in the occupied Donbas region. The problem, his office stated, was that information on both sides of this conflict is “completely different.”

Too many are falling for the propaganda, according to the Ukrainian evangelical seminary leaders—pained particularly by their fellow evangelicals in Russia.

“They believe what is shown on the news,” Dyatlik said, “but don’t believe the witness of Christians from the shelters, from the ruins, from the street fighting.”

He was keen, however, to honor those who have protested the war.

“We know the heroes … who were not silent,” he said, “risking their families and their freedom. We pray for them, we are thankful to them.”

In early March, hundreds of Russian evangelical leaders signed an open letter calling on their government to “stop this senseless bloodshed.”

Putin has labeled domestic opposition to the war as “gnats,” “traitors,” and “scum.”

Nearly 15,000 Russians have been arrested for anti-war protests. Tens of thousands have reportedly left the country since the war began.

Valerii Antonuk, president of the Baptist Union of Ukraine, appealed to Christians abroad. Speaking from the heart of the capital, he said success in Kyiv, indirectly, will impact Moscow.

“Stand with and for us in this spiritual breach, and hold this shield of prayer over Ukraine,” he said. “We pray today that God will allow our country to persevere and win, and to defend the freedom that is so important for spreading the gospel in Ukraine [and] Russia.”

But beyond the call for prayer and advocacy, the evangelical seminary leaders suggested ways supporters can help—alongside essential financial assistance.

Geychenko requested consultation on how theological education can continue in the seminaries’ tattered shape. Having lost all materials but their e-readers, he suggested online libraries abroad can be opened for faculty and graduate student use.

UETS said it is ready to start online education immediately. OTS hopes to do so by April.

Siniy, however, advised beyond theology as many refugees will wind up having to remain a long time in their host nations. “Think about their education,” he said, “not just food and water.”

Ukrainians must organize in their displacement, to start schools for their youth and to plant churches for their families. Pastoral care must be prioritized quickly, as feelings of survivor’s guilt are starting to develop among refugees.

But to close the meeting, Dyatlik offered a theological message—one he said was needed greatly in a post-truth society.

Satan’s first challenge was to get Adam and Eve to question reality: Did God really say? And as this brought sin into the world, requiring God’s initiative to cure, so also can only the Holy Spirit convict the hearts of blinded Russians, he said. Argument and evidence will not help the cause.

Besides, there is too much work to do, and little time to rest.

“Today is the 22nd day of the war,” Dyatlik said. “Now there is no weekend, no Monday, no Tuesday. We are just counting the days.”

Correction: An earlier version of this article errantly quoted Dyatlik as stating that Judah betrayed Jesus, instead of Judas. CT regrets the error.