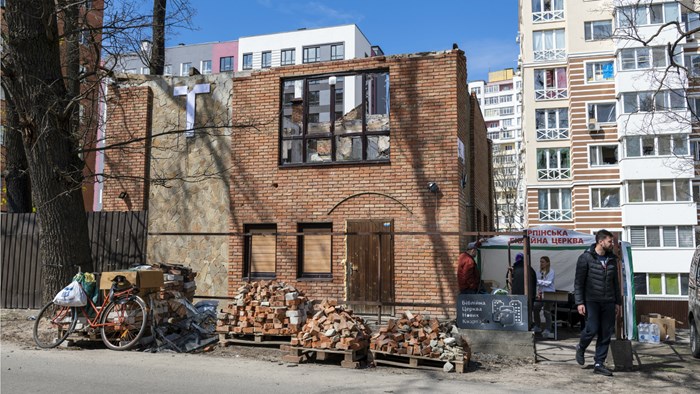 Ministry had been going so well in Irpin, Ukraine.

Over the past decade, the population of Kyiv’s northwest suburb swelled to 90,000, and Irpin Bible Church (IBC) grew with it. The Baptist congregation grew to include 700 adults, with an additional 300 children. And in 2019, 12 members launched a church plant in the “New Blocs” neighborhood, where 15,000 Ukrainians lived in multi-story apartment complexes with no church of any kind.

Meeting previously in a basement office, last December the church planters purchased a stand-alone building from a local bank, grateful to have their own location amid a shortage of rental space. With a ground-floor capacity of 200 people, the congregation’s 60 members anticipated additional growth.

Hostomel was the first suburb to fall, being home to the regional airport. The assault on Irpin and neighboring Bucha began February 27, attempting to encircle Kyiv.

IBC senior pastor Mykola Romanuk was in the US at the time, while his family relocated to western Ukraine. He returned on March 5, only to leave later that day when tanks first breached the suburb. The next day, a member of his congregation who had returned to Irpin to assist with evacuations was killed alongside a mother and her two young children—a tragedy witnessed and shared worldwide by The New York Times—as Russian forces shelled the humanitarian corridor.

By March 14, Russia occupied half the suburb, including the church plant’s quarter. IBC’s sanctuary remained secure, but 200 of its members fled to 20 nations across Europe, while another 500 scattered across western Ukraine. Romanuk was in Rivne, 200 miles west of Kyiv, with about 70 of his congregants. Services resumed online while the stalwart faithful tried to serve 4,000 mostly elderly residents left behind in Irpin.

Dozens were killed in Russian atrocities.

On March 16, Ukraine announced a counterattack. The army recaptured the suburb on March 28. But fighting continued in Bucha for another two days, during which time Russia increased its seemingly random barrage of missiles into Irpin. One hit the church plant, destroying its roof and the second floor Sunday school classrooms.

There were no military personnel in the area.

“Any building can be rebuilt,” said Romanuk. “Compared to the destruction of the city and the many who died, it is no big deal.” 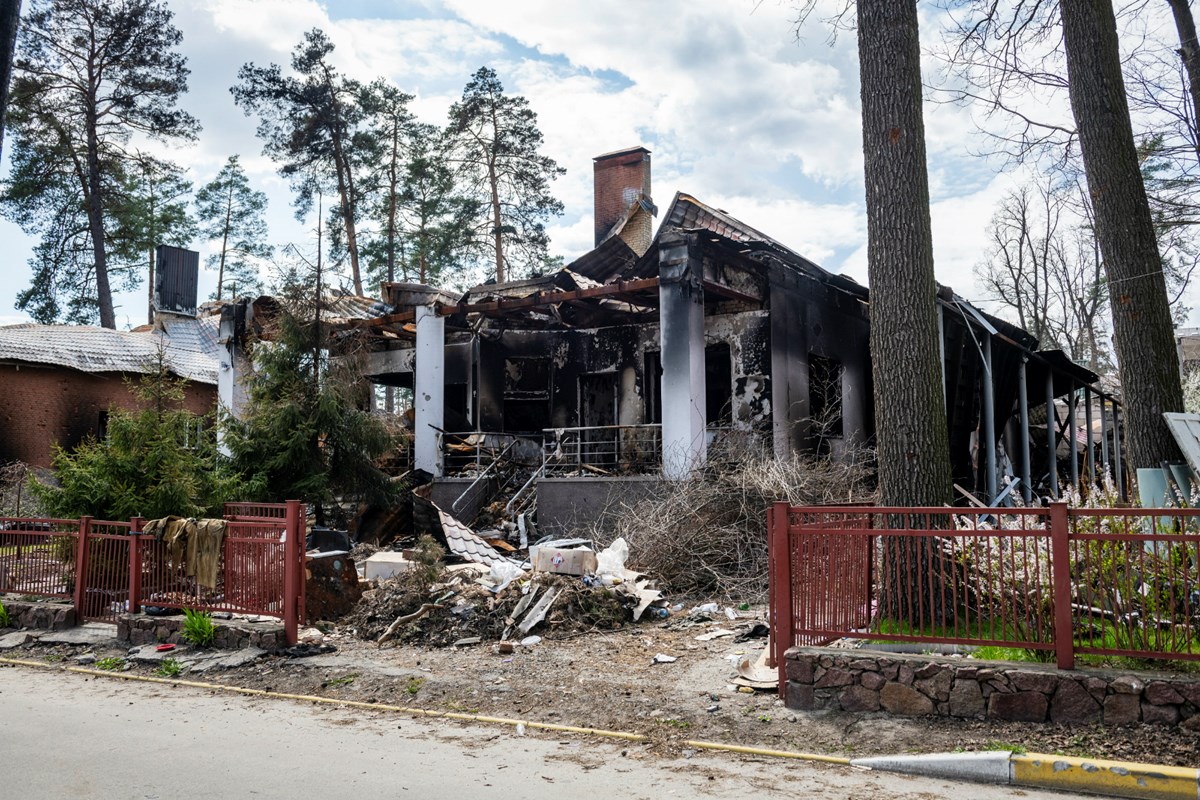 The Irpin headquarters of Mission Eurasia, founded in 1991 to spread the gospel in the former Soviet Union, was destroyed during the Russian invasion.

While some Ukrainian Protestants see church buildings as holy, he added, the majority Orthodox Christians view sanctuaries as a sacred space to connect with God, imbued with divine aura. No food is allowed inside; certainly not a bathroom toilet.

This has impacted relief efforts. Of the eight Orthodox churches in Irpin, only two had service annexes. Though only one was damaged—and its priest killed in an airstrike—it was only the annexes that opened to shelter their neighborhood members, he said. One Orthodox priest tried to help more broadly.

“In our theology, the church is a place for service and worship,” said Romanuk. “Now it has become a home for the homeless, catering to the needs of all.”

Leading IBC since 2009, he returned with his wife and daughter on April 3, living in the church basement with 40 of Irpin’s displaced residents. His apartment is undamaged, though a shell hit the neighboring complex. But though electricity returned to half the suburb on April 20, the Romanuks reside in their place of ministry.

The community is welcomed during morning and afternoon shifts to charge their cell phones. Up to 200 people are served a daily lunch. At 6 p.m. there is a Christian film or spiritual lecture. Home furnishings are given to those who need it, while 30 elderly and disabled people are delivered food and medicine.

And in the past three weeks, church members have begun light repair and plastic covering of broken windows and roofs, before coming rains cause further damage.

Other evangelical ministries in Irpin have made similar pivots to better serve their battered community. 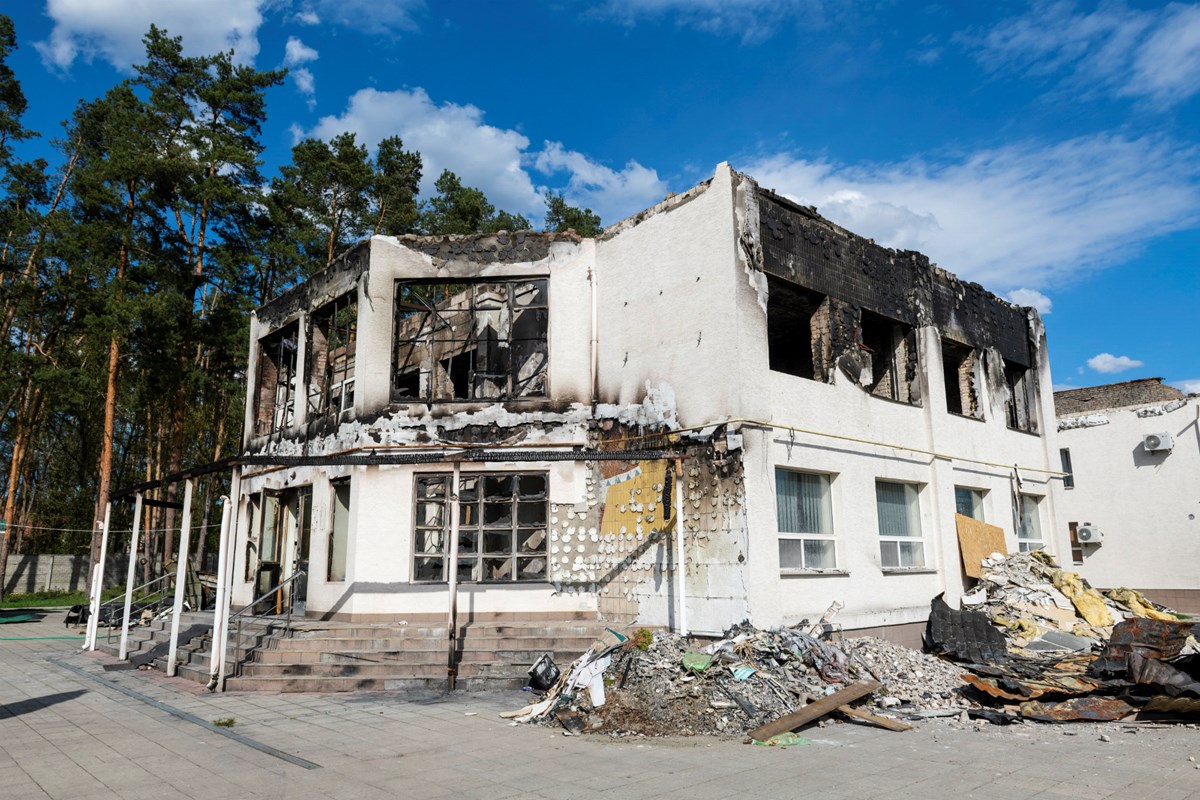 Irpin Bible Seminary sheltered 200 people during the invasion. Hundreds more came to get clean water and charge phones before the building was destroyed.

“We understand that a seminary is not a building—it is our students and staff,” said Igor Yaremchuk. “But now the war has taken them out of the classroom, with countless opportunities to practice their ministry skills.”

President of Irpin Biblical Seminary (IBS) since 2008, he keeps daily contact with the school’s 837 students via an evening prayer group via social media. Every week he prepares a 10-minute devotional—“A Cup of Coffee with the Rector”—in which he encourages faithfulness amid difficulty and provides updates about the school.

The worst came on March 20.

Also located in Ukrainian-controlled Irpin, IBS remained connected to the utility grid. The campus welcomed 1,000 people a day to draw water and charge cell phones, while giving shelter to 200 people who lost their homes.

The Ukrainian counterattack was already underway, and Yaremchuk believes Russia shelled each of the five connected seminary buildings because of this community contribution. Their iconic green roofs were destroyed, along with the kitchen and all second-floor classrooms.

“With God’s help, we will restore it,” he said. “But it was sad and painful.” 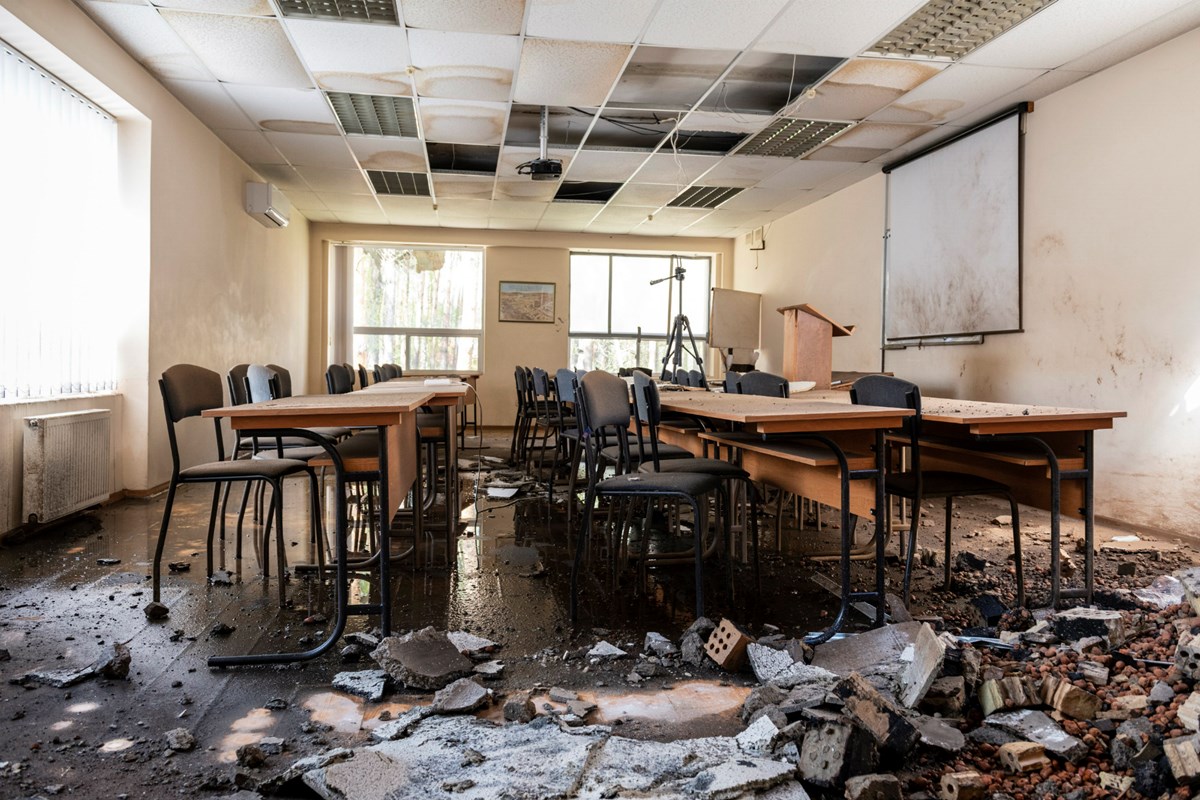 Irpin Bible Seminary will wait to repair its building, in case the Russians return. Today, the 800-plus students stay connected via a daily devotion on Zoom.

The campus is being cleared of debris, but repairs will wait until the situation stabilizes. Russia could return to attack Kyiv. But if the status quo holds, IBS plans to resume theological education in September—in person if possible, online if necessary. Currently it offers one course only, taught by linked professors in the United States.

The topic could not be timelier: “Counseling in Critical Situations.”

While he cannot be sure how much each of the 700 registered students can commit to the coursework, Yaremchuk hears many stories about their active ministry. The influence of the Baptist Union institution is felt in relief work and psychological care throughout the nation and in Eastern Europe, he said. And the gospel is shared—especially in bomb shelters.

He compared Ukraine to the church in Acts 8:1–4. When persecuted and scattered, members evangelized.

“The war is terrible, but it has been good for Ukrainian souls,” said Yaremchuk. “And in a Europe that is spiritually dead, our Bible Belt refugees are bringing a religious revival.” 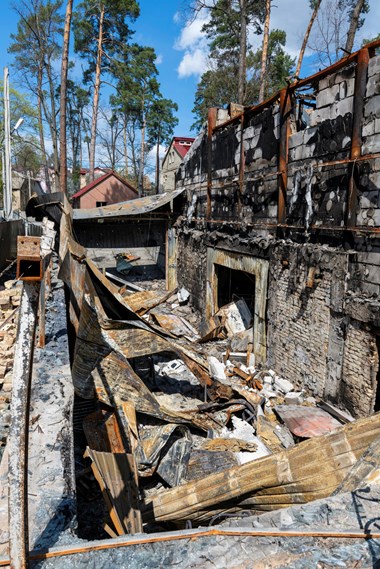 Mission Eurasia is a good example.

Having relocated to Irpin from Moscow to escape renewed pressure on evangelical ministries, Sergey Rakhuba never expected Russian President Vladimir Putin would follow him to Ukraine.

The Mission Eurasia president purchased its suburban headquarters from a local bakery—switching the facility’s focus to offering the bread of life. But when the area fell to occupying forces, the Russian military commandeered the ministry as a barracks, making use of its two apartments and 38-person second-floor dormitory.

Ammunition was stored in the basement. Bibles were stacked to barricade windows. And when the unit finally retreated on March 28, it burned the religious literature and blew up its weapons.

The building went with it.

“We shed tears. There are so many memories,” said Rakhuba. “It was our mission hub not just for Ukraine, but for all of Eurasia.” 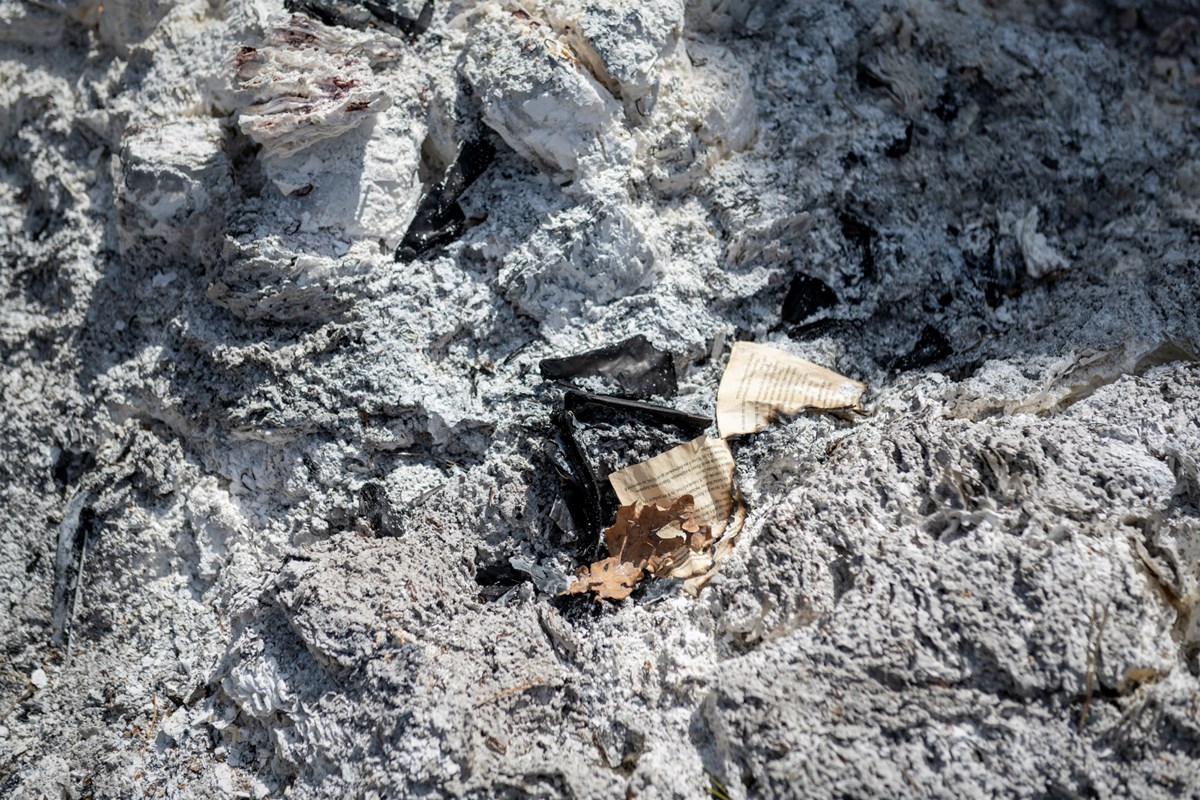 Bibles and Christian literature at Mission Eurasia were destroyed by fire.

But now, there are two hubs in Poland providing relief for refugees, with the international work in 14 former Soviet nations coordinated from Moldova. And four western Ukrainian hubs serve the internally displaced, with Lutsk printing and distributing ten times the Bibles that were destroyed in Irpin.

“Young leaders trained in our center are now leading service on the front lines,” said Rakhuba. “God’s victory will be bigger than the destruction.” 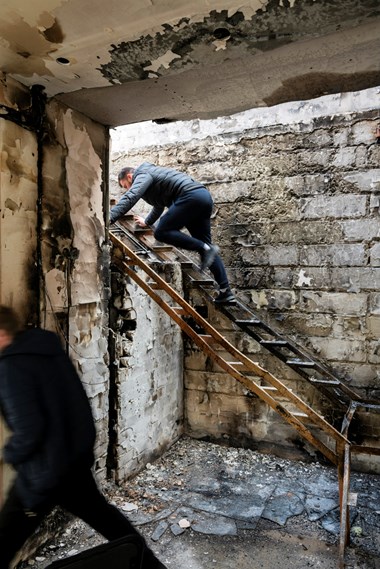 The Baptists remaining in Irpin have started the long process of rebuilding their damaged churches.

New Blocs Baptist Church resumed weekly worship on May 8. The day also marked the first service in Hostomel, where 35 people joined a new IBC plant launched to accompany the church’s relief work there.

And it was the fourth meeting at IBC’s undamaged main campus, with 50 members who had returned to the now-liberated suburb. They were joined by another 50 believers whose churches have not yet restarted, along with 100 others from the community at large.

“When you see your city destroyed—all month long—you understand it could hit you also,” said Romanuk. “But despite our sadness, God has given us more ministry than before.”

[ This article is also available in 简体中文,  繁體中文,  русский, and Українська. ]

1 of 10
Irpin Bible Church bought this building for a church plant three months before Russia invaded the Kyiv suburb.The New Blocs Baptist church plant, located in a community of 15,000 Ukrainians living in multistory apartments, had anticipated growth this year.The Baptists remaining in Irpin have started the long process of rebuilding their damaged churches.The Irpin headquarters of Mission Eurasia, founded in 1991 to spread the gospel in the former Soviet Union, was destroyed during the Russian invasion.Bibles and Christian literature at Mission Eurasia were destroyed by fire.Large parts of Mission Eurasia's headquarters were destroyed.Irpin Bible Seminary sheltered 200 people during the invasion. Hundreds more came to get clean water and charge phones before the building was destroyed.Irpin Bible Seminary will wait to repair its building, in case the Russians return. Today, the 800-plus students stay connected via a daily devotion on Zoom.The Russian military fired missiles into Irpin. Some did not have any obvious military target.Most of the members of Irpin Bible Church fled to Western Ukraine or Europe ahead of the Russian invasion. Those who remain are trying to serve the elderly residents left in the city.
expand